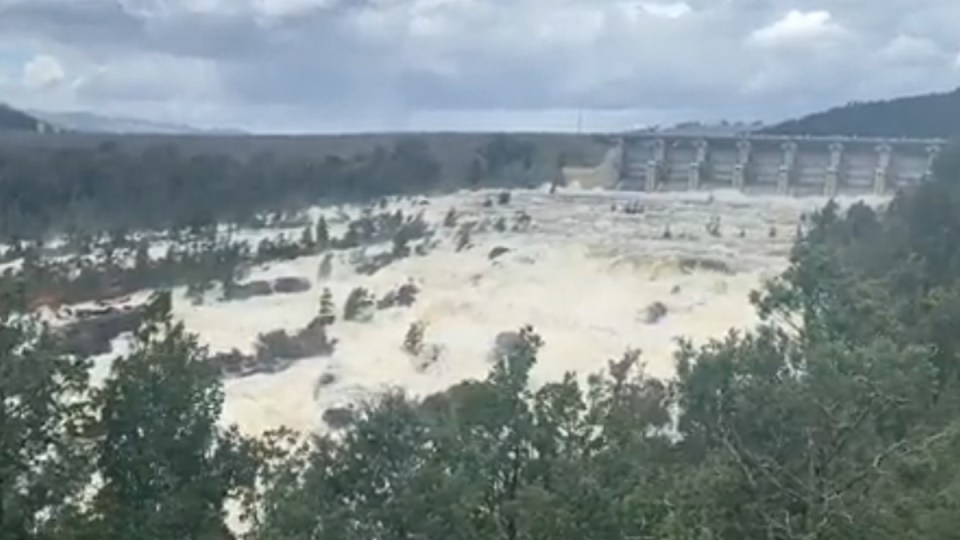 The Wyangala Dam, near Cowra, was spilling on Friday, after days of heavy rain. Photo: Twitter

There are increasing flood fears for many towns in NSW, even as this week’s record rain begins to ease for much of the state.

The south-east copped a drenching on Friday, along with Victoria, where rain fell all afternoon.

But the real danger zone was NSW, where SES responded to more than 300 requests for assistance in 24 hours, the majority coming from the central west, including Orange, Bathurst and Young.

Extraordinary pictures emerged of one major NSW dam, illustrating just how high the flood risk is after a week of wet and cold weather. The Wyangala dam, near Cowra, was spilling on Friday afternoon, sparking major fears for towns downstream.

“The catchments are really saturated, the dams are full. That makes the rivers really sensitive,” Bureau of Meteorology senior meteorologist Jane Golding said.

Rivers around NSW are expected to flood in coming days after the wet week saw several areas receive more rain than they would typically record through all of November.

“The catchments are really saturated, the dams are full. That makes the rivers really sensitive,” Bureau of Meteorology senior meteorologist Jane Golding said.

Nine flood rescues were conducted overnight and into Friday morning, largely for cars in floodwaters.

The service is “keeping a very close eye” on communities in the Lachlan River catchments as it has been for some months.

“That catchment particularly has been quite sodden for a long time,” Mr Austin said.

With flood warnings still in place for rivers across NSW on Friday, the Bathurst River was expected to peak at more than five metres early on Saturday.

“Thangool Airport [in central Queensland] had its heaviest November rain in over 90 years and that was 107 millimetres recorded,” he told the ABC.

“Gayndah had 87 millimetres, which was its heaviest November rain in over 20 years and that’s well over a month’s worth of rain for that particular location.”

More storms are forecast for Queensland on Friday afternoon, although the weather bureau said most of the wild weather would move out of the state overnight.

In NSW, the SES has responded to more than 300 requests for assistance in the past 24 hours. Most have been from the central-west, including Orange, Bathurst and Young.

A potential evacuation was on the cards for about 15 homes in Georges Plains south of Bathurst but SES deputy commissioner Daniel Austin said “that threat has reset”.

The service was still “keeping a very close eye” on communities in the Lachlan River catchments, as it has for some months.

“That catchment particularly has been quite sodden for a long time,” Mr Austin said.

“In some places the floodwaters will recede and the ground may dry a little bit. We know the underlying ground is still saturated, so it doesn’t take a lot now for any more rainfall to run off.”

The rivers may also continue to rise even once the rain stops as water flows into the catchment.

“Don’t be fooled by blue sky, it doesn’t mean the risk is over … people can get into trouble,” Mr Austin said.

The SES conducted nine flood rescues since about midnight on Thursday, largely for cars in floodwaters.

Across the border in Victoria, rain fell for much of Friday in the state’s east, prompting the Bureau of Meteorology to issue severe weather warnings for on Friday morning.

“Heavy rainfall, which may lead to flash flooding, may develop during Friday, continuing throughout the day and into tonight,” it said.

“Rainfall totals of 30-60 millimetres are likely across the warning area, with some falls of 50-80 millimetres possible across the Gippsland high country and adjacent coast.

“Rainfall rates are expected to gradually ease below warning thresholds during Saturday morning.”

The BOM’s Dean Narramore said it would also be cold.

“For the next few days it will feel more like July rather than November for much of south-eastern Australia,” he said.

“We’re talking maximum temperatures in the low to mid-teens for much of Victoria and NSW and probably high single figures for parts of Tasmania.

“Snow levels will drop to around 1000 metres on Sunday night into Monday in Victoria, and possibly drop to 200-300 metres in Tasmania in the early hours of Monday morning.”

It came after some South Australian towns had their heaviest rain in months – or even years – as a low-pressure system parked north of Adelaide for 24 hours on Thursday.