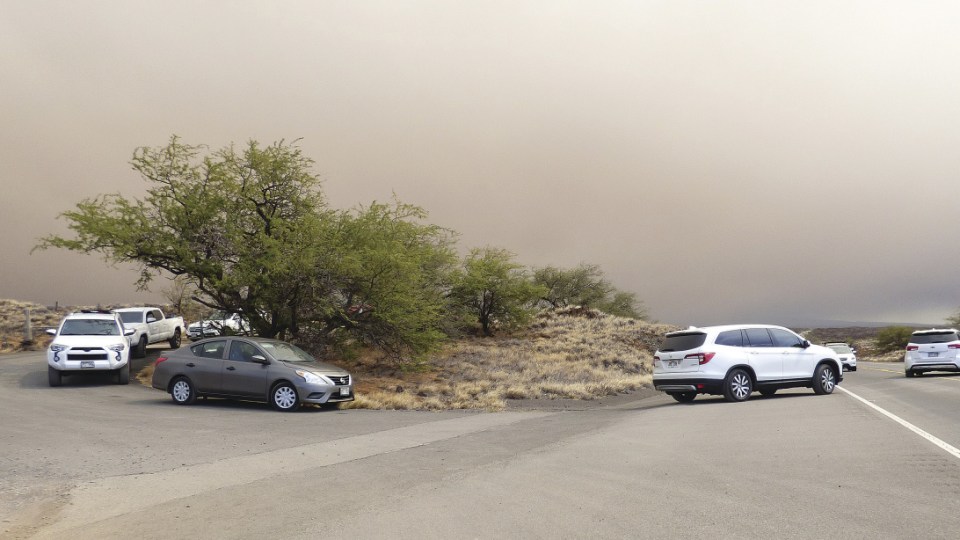 Vehicles flee the fire in the Waikoloa Village area of Hawaii. Photo: AAP

Firefighters have gained more control over a wildfire in Hawaii that forced thousands of people to evacuate over the weekend and destroyed at least two homes on the Big Island.

Authorities have lifted evacuation orders but warned they could be reinstated at any time and that people should be ready to go.

“It’s the biggest [fire] we’ve ever had on this island,” Big Island Mayor Mitch Roth said of the more than 160-square-kilometre blaze.

“With the drought conditions that we’ve had, it is of concern. You see something like this where you’re putting thousands of homes in danger, it’s very concerning.”

Fires in Hawaii are unlike many of those burning in the US West. They tend to break out in large grasslands on the dry sides of the islands and are generally much smaller than mainland fires.

Two homes were confirmed destroyed in the Hawaii fire.

According to the National Weather Service, strong winds and generally dry conditions will continue throughout the islands on Monday. The gusts will begin to ease Tuesday.

Several wildfires also were burning in drought-stricken California and Oregon.

Containment on Monday reached 35 per cent for California’s largest, the Dixie Fire, which covered about 1005 square kilometres in mountains where 45 homes and other buildings have been destroyed.

In southern Oregon, lightning struck parched forests hundreds of times in 24 hours, igniting some 50 new wildfires as the nation’s largest blaze burned less than 160 kilometres away, officials said on Monday.

Firefighters and aircraft pounced on the new fires before they could spread out of control. No homes were immediately threatened.

The Bootleg Fire, the nation’s largest at 1670 square kilometres, was 84 per cent contained on Monday, though it isn’t expected to be fully under control until October 1.