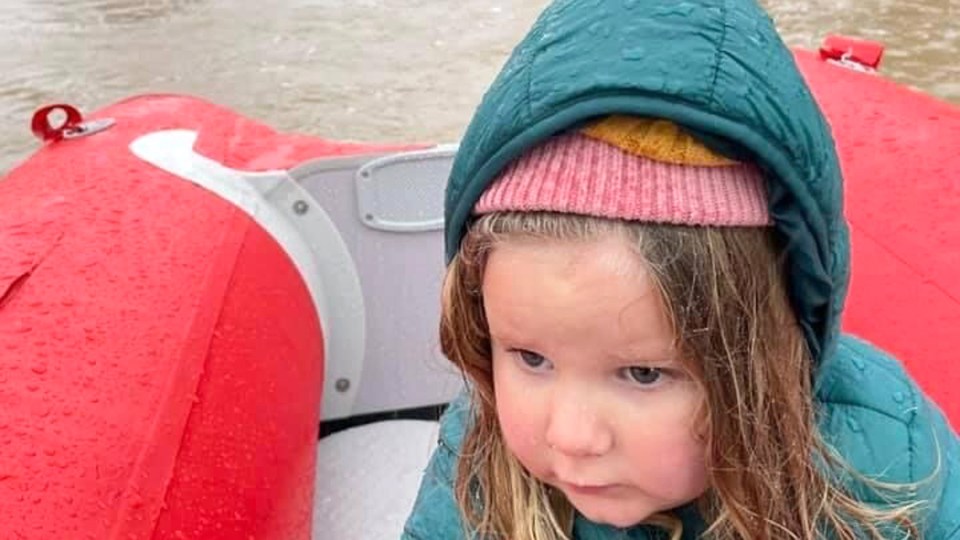 The Traralgon Creek, which flows through the town, has caused major flooding and emergency authorities have ordered residents from about 200 homes to leave.

The State Emergency Service has issued an evacuation order for low-lying parts of the Latrobe Valley town.

Traralgon resident Gemma Moran evacuated her home in a small boat with her six-week-old baby and three-year-old daughter, Annie.

“My partner and daughter came in and woke me up and said, ‘You need to look outside the window’.

“And our whole court was under already,” she said.

“Our house is elevated so the water was up on our bottom step. The front yard, driveway and court was already under. I walked out to our backyard which had started to go under as well.

“Within an hour-and-a-half, it had risen right up. Our whole back end of our house is a bit lower, so water started coming in there.

“It was easy for us to get out of our house and onto the little boat to get out, but when I left, there was water inside [the house],” she said.

“A few years ago, there was another flood at the underground car park of the plaza. But it didn’t get this bad.”

“I was frantically running around my house trying to quickly pack a suitcase with some nappies and formula.

“We left and I was a wreck because I had left my partner behind; he was there with our dog. It was like the unknown, I didn’t know what I was going back to.

“I haven’t seen my partner yet, but he has since been rescued. He’s at my Mum’s house and I’m at my brother’s at the moment, so we’ll head back now to see him.’

“I’ve been able to bathe the kids so they’re nice and warm.

“Once we got out of the boat near Shakespeare Street, the ambulance were there waiting so we jumped straight in there and they took us to the basketball stadium where we met my mum.”

Ms Moran urged those caught up in flood affected areas to leave early.

“I wish I had had left sooner. Like when I first woke up this morning, I was hoping it was going to get better and we would have been able to stay there,” she said.

“So my word of advice would be just leave as soon as you can. Don’t wait around, it’s not worth it. Your stuff is replaceable, your family isn’t.”

Meanwhile, residents of Shakespeare Street have about 30 centimetres of water inside their homes.

Ingrid Snell, who lives on Shakespeare Street, right on the Traralgon Creek flats, said she was disturbed about 6am.

“My husband went outside and he had a look around and he said, ‘It’s coming’,'” she said.

“So he got his car out as far as what we could. But unfortunately, it wasn’t far enough so we lost both cars.

“We just prepared everything and put our things up as high as we could.

“Then we waited and watched it rise.

“While we waited, the SES and police went by a couple of times and then they came back about and rescued us from our house.

“But my husband has lived there all his life and they have had water in that house twice in his life.”

An evacuation centre has been set up in Traralgon to help residents as they flee from rising floodwaters.

Because of COVID concerns, evacuees are being directed to stay with family or in hotels if possible.

Latrobe City Mayor Sharon Gibson said the council was working with police and the SES to ensure their residents’ safety.

“The police are putting the road closures in place, they’re working with the SES helping those who desperately need to be evacuated,” she said.

Police and ambulance helicopters have been used to winch people to safety who have been caught in floodwaters.

SES Gippsland regional manager Anthony McClean said the helicopters had rescued people trapped in their cars after they tried to drive through flood water.

“So we’ve had two air resources involved in the Traralgon area, winching some people from vehicles and other locations in the area.

“Some are in vehicles that have unfortunately driven through floodwater, others on roads, but also others in houses that have been rescued because of floodwater who have been inundated in their houses,” Mr McLean said.

“We are prioritising life threatening emergencies over everything else.”
Storm damage is widespread through Gippsland, with more than 10,000 homes without power.

Residents rescued as floodwater gushes into homes in eastern Victoria