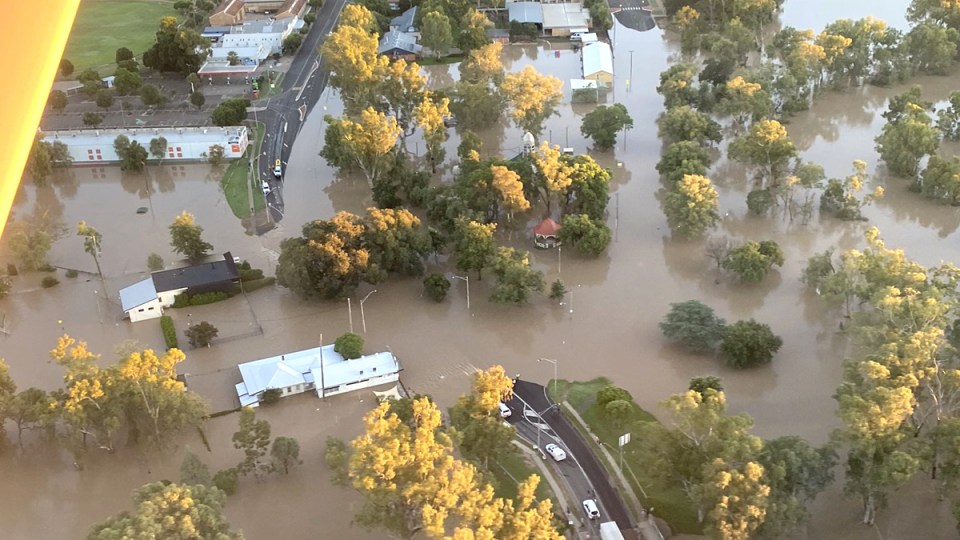 Moree has been split in two by floodwaters from the Mehi and Gwydir rivers. Photo: Twitter

The central NSW town of Moree was split in two as floodwaters peaked at the highest levels in nearly a decade on Thursday morning.

More than 400 people were evacuated as the Mehi River, which flows through the town, peaked at more than 10 metres.

The Gwydir River to Moree’s north is also in flood, with the surrounding area a sea of dirty brown water that is likely to take days to drain away.

The NSW SES reported 16 rescues in the 24 hours to Thursday morning in the area as floodwaters rose. Elsewhere, residents were sandbagging and elevating furniture to keep it out of the rising water.

“What we see now is that sewerage has overflown. What we see is snakes and spiders are in some of those areas,” he told the Today show on Thursday.

“What we see now is the debris needs to be cleaned up very quickly, and then we still have to resupply a lot of communities.”

Premier Gladys Berejiklian shared the “good news” on Thursday morning, but warned the floodwaters that remained were incredibly dangerous.

A man died after his car was trapped in floodwaters in north-west Sydney on Wednesday, and the body of another man was found submerged in a ute in Queensland’s south-east.

“All of us were very saddened by the tragic loss of life yesterday,” the Premier said.

“You may have heard your local river has peaked or that the worst of the rising waters may have may have ceased [but] the currents underneath the surface are very strong and the flows are doing things that don’t normally do.

“Please stay out of those floodwaters.”

There have been 11,000 calls for help to the NSW State Emergency Service so far, and 950 flood rescues.

Moderate to major flooding is still occurring along several rivers. But the focus has turned to the northern rivers, where floodwaters are inundating Grafton, Maclean and Ulmarra.

Those in low lying areas of Ulmarra, Bushgrove and Cowper were ordered to evacuate on Wednesday afternoon.

There is also still major flooding along the Hawkesbury River. Authorities say it is likely to continue at North Richmond and Windsor until the end of the week.

The Upper Hunter around Singleton and parts of the Central Coast are also still of concern.

Meanwhile, some of the 20,000 people evacuated across the state have been cleared to return home.

The SES issued an “all clear” notice for the Kempsey CBD and nearby areas late on Wednesday night, as flooding eased on the Macleay River.

More than a dozen evacuation orders remain, and about 60,000 people are on standby to evacuate, with major flood warnings still in place for the Macintyre, Gwydir, Clarence and Hawkesbury, Nepean and Colo rivers.

The SES hoped more people will be taken off standby or cleared to return home by the end of Thursday, Ms Berejiklian said.

The Bureau of Meteorology has predicted no major rain for NSW for at least a week.

The reprieve paved the way for defence personnel and emergency service workers to get essential supplies to isolated communities, particularly North Richmond in Sydney’s north-west.

Defence personnel have already been embedded in emergency operations centres in areas of concern, and will be part of teams assisting with damage assessments on Thursday.

The ADF’s role will be stepped up in coming days, with troops to be brought in from northern NSW and Newcastle.

“As soon as the all clear has been given, we’ll assist with those SES-lead teams in assisting with the clean up,” ADF Brigadier Mick Garraway said.

Resilience NSW Commissioner Shane Fitzsimmons told Today the clean up would be dirty, emotional work and that hundreds of firefighters would be among those lending a hand.

“When you think about the last 18 months to two years, [it has been] people on their knees with drought, the devastation of the bushfires, storms and floods back in February last year, COVID throughout 2020 and into ’21, and now the extraordinary impacts of this rain event and flooding,” he said.

“Our hearts break for these people.”

NSW town split in two as floodwaters continue to rise