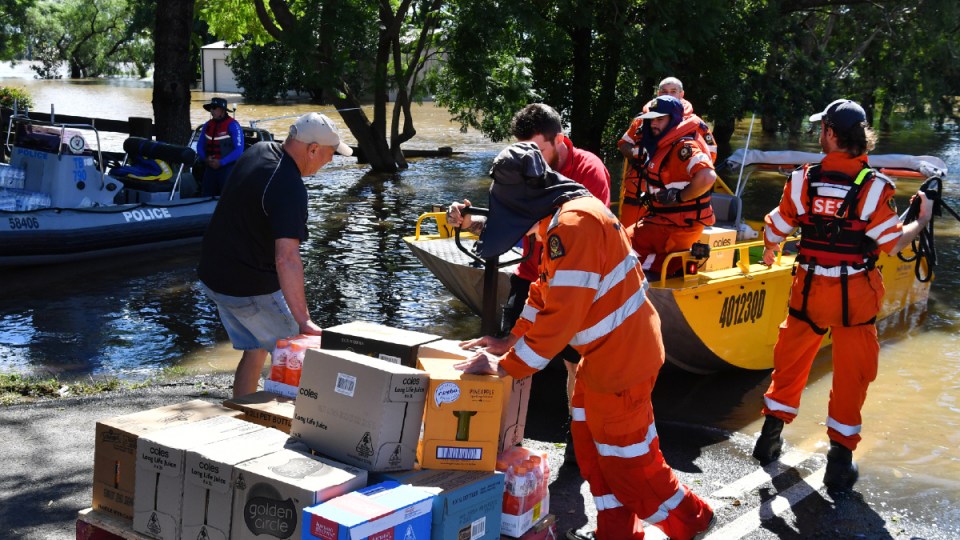 Australia’s flood crisis has turned deadly, with a body found in a car trapped by floodwaters in north-western Sydney and a desperate search for a man missing in Queensland.

The body of the man, who is yet to be formally identified, was found at Glenorie.

“Emergency services responded to reports the car was trapped in flood waters. Officers from The Hills Area Command attended the scene, along with flash flood rescue, to search for the vehicle,” Mr Dutton said.

“At 1.10pm the vehicle was found, tragically with a man’s body inside.”

Mr Dutton said the tragedy underscored repeated warnings from authorities not to drive into floodwaters.

Further north, authorities confirmed a rescue mission was underway on the Gold Coast after the car of a missing man was found in flood water.

David Hornman, 38, was last seen on Monday and his family has had no contact with him since he left for Mount Tambourine for work.

A swiftwater rescue mission was launched on Wednesday after Mr Hornman’s overturned ute was found in Canungra Creek.

Confirmation of the Sydney fatality came as authorities warned treacherous rivers across NSW would remain swollen into the weekend but were unlikely to rise further as weather conditions eased.

About 24,000 people in NSW remain evacuated from their homes but the torrential rain that has battered the state for the week has finally settled.

About 60,000 people have nevertheless been told by the State Emergency Service to be ready to evacuate, with major flood warnings still in place for the Macintyre, Gwydir, Clarence and Hawkesbury, Nepean and Colo rivers.

Even as the torrential rain finally eased and skies cleared, another threat was emerging on Wednesday.

Videos and images showing masses of spiders escaping floodwaters have been posted online this week. Experts say the deadly funnel-webs – which live in damp, wooded areas, close to water – might be among the species seeking shelter in people’s homes.

Ms Berejiklian said the state remained in the grip of a devastating crisis. Some rivers were still rising and floodwaters would take days to recede.

“We’re certainly not out of the woods,” she said.

The Bureau of Meteorology predicts no major rain for at least a week, barring up to 40 millimetres on the NSW south coast on Wednesday.

The reprieve has paved the way for defence personnel and emergency service workers to get essential supplies to isolated communities, particularly North Richmond, in Sydney’s north-west, where floodwaters continue to rise.

Hundreds of defence personnel have been sent to flood-hit regions, initially to help with search and rescue and evacuations.

Defence established Operation NSW Flood Assist on Wednesday to help emergency services after almost a week of flooding rains. Up to 700 personnel will be deployed, including 400 from Queensland.

Mr Dutton said that number was expected to climb in coming days as the recovery effort swung into action.

Additional aircraft are being moved from Queensland to NSW to sustain the support and civilian aircraft have been given access to the Richmond base, on the outskirts of Sydney, to help evacuate the Colo River region.

Prime Minister Scott Morrison toured flood-hit Windsor, in Sydney’s north-west, in an ADF helicopter on Wednesday morning. He said he “could see the water almost literally lapping at the fence of the RAAF Richmond base”.

“The expanse of water that went right across that region was quite devastating to see,” he said.

“It was very clear that when these waters subside and they will … the work that is ahead of us when it comes to the clean-up and the recovery.”

Also on Wednesday, more than 1000 Mallacoota residents remained without power as the town in Victoria’s east weathered heavy rain and strong winds.

Mallacoota was deluged with more than 100 millimetres of rain on Tuesday night.

The low-pressure system that has wreaked devastation across NSW is moving south, prompting the Bureau of Meteorology to issue severe weather warnings for coastal areas in Gippsland and the Otways.

According to the Ausnet website, 1067 Mallacoota residents were expected to spend most of Wednesday without power after it was cut by a downed power line.

South Gippsland was hit hardest on Tuesday night, with 149 millimetres of rain at Balook.

Yarram and Stradbroke also reported falls of more than 100 millimetres, while Hogan Island had a wind gust of 107km/h.

Power outages were also affecting hundreds of customers at Maffra, Yinnar South and Traralgon in the state’s east.

The Otway coast west of Melbourne was forecast to have heavy rain on Wednesday. There are also flood watches for central Victoria, west Gippsland and the Snowy River.

But overall, conditions were improving as the low-pressure system moved to the south-east.

“The rain is continuing, it has eased through east Gippsland and I don’t think we’re going to see much more out there,” BOM senior forecaster Keris Arndt said.

“Through central parts … we’re likely to see a little bit more [but] everything is easing off generally.”