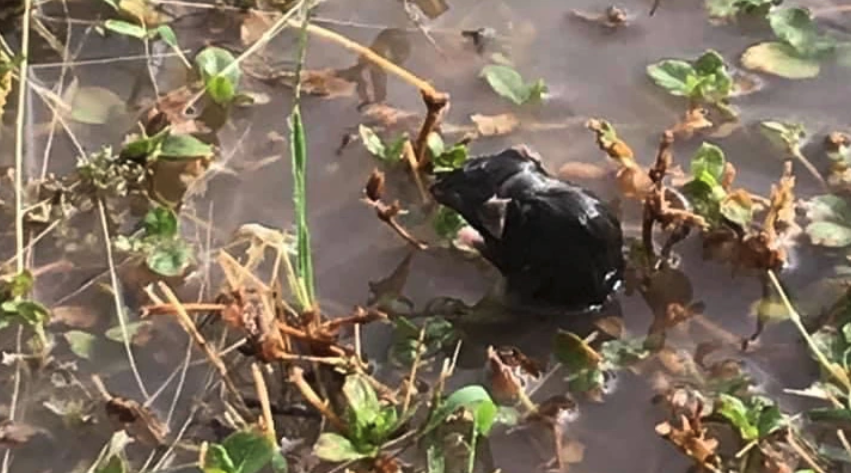 A wet but alive mouse on sodden ground in Coonamble, in north-central NSW. Photo: Ana Robson

WARNING: THIS STORY CONTAINS PHOTOS OF DEAD MICE THAT MAY DISTURB SOME READERS.

Wet weather in northern NSW has given some landowners a reprieve from the mouse plague, but a CSIRO researcher says it will not necessarily wipe the rodents out.

Mouse numbers exploded in parts of regional Queensland and NSW months ago.

Landowners and businesses have been since desperately trying to bring their numbers down.

For some people, one of the benefits of the recent rain has been its impact on the mice.

“I think it’s steadied them right down,” said Enid Coupé, a Walgett resident and agricultural services worker who removed 913 mice from her shed just a few days ago.

But other farmers and residents in the area have reported seeing more mice inside their homes and sheds since the rain began, with the rodents seeking shelter in the warmth.

CSIRO researcher Steve Henry said mouse burrow networks were so developed they could be protected from high rainfall.

“It’s a bit tricky to know exactly what this rain will mean for mouse populations,” he said.

“If it will be of a magnitude that will flood burrows out and force mice to seek shelter, it could potentially kill a lot of mouse pups that were down the burrow.

“But in terms of killing large numbers of adult mice, that’s unknown.

“Potentially it might just get them to move somewhere that’s a bit drier and then [they will] move back into those areas that were so wet earlier.”

Mr Henry said while some farmers were seeing fewer mice, they would have to wait until things dried out to know if the rodents were just hiding in burrows.

Farmers in northern NSW are preparing to sow crops after getting a decent downpour in recent days.

“The focus of our attention now is how can we prepare to protect the freshly sown winter crop,” Mr Henry said.

“I suspect there’ll be some people very nervous about sowing a crop.”

“How much rainfall we need to get the numbers to be reduced to a level that’s not going to have any impact on our cropping program is yet to be seen,” he said.

“But my thoughts would be maybe we needed to have total inundation of some country to flood out the mice and drown them. Otherwise there’s a chance there’ll be a few that survive.

“Obviously with the way the weather is, it’s going to wash out some young ones, so maybe we might see one or two generations of younger mice that may have been impacted as a result of this rainfall.”

Mr Henry said it was important to get mouse numbers down before they started breeding again next spring.

Dr Coupé said in places where the rain was reducing mouse numbers, there was an opportunity to tackle those that remained.

“Now’s the time to hit them hard and kill the mice that are left so that we’re looking at being able to plant a crop that’s not going to get eaten overnight by thousands of mice in the paddock,” she said.

The mouse plague’s harmful effects go beyond crops, with households and shops in northern NSW also struggling with the huge numbers.

“We’re sick of living in houses that smell like mice,” Dr Coupé said.

“You can be sitting in the lounge room and trying to watch a bit of TV and all you can smell is a dead mouse or poo so you go looking for it, you find them, then you chuck them out – and the outside of the house stinks worse than the inside of the house because they’re just all dead under the house everywhere.

Mr Henry said at this point, the outlook was not good. A mild summer has made way for a warm, humid autumn, which is keeping mice breeding, and there is no sign of it slowing down.

He said if there was a really cold winter, mouse numbers might drop.

“The advice is to remember these plagues do end,” he said.

“We should have some good seasons and things will get better.

“But that’s cold comfort for people living through a mouse plague.”

Even historic floods may not bring mouse plague to an end