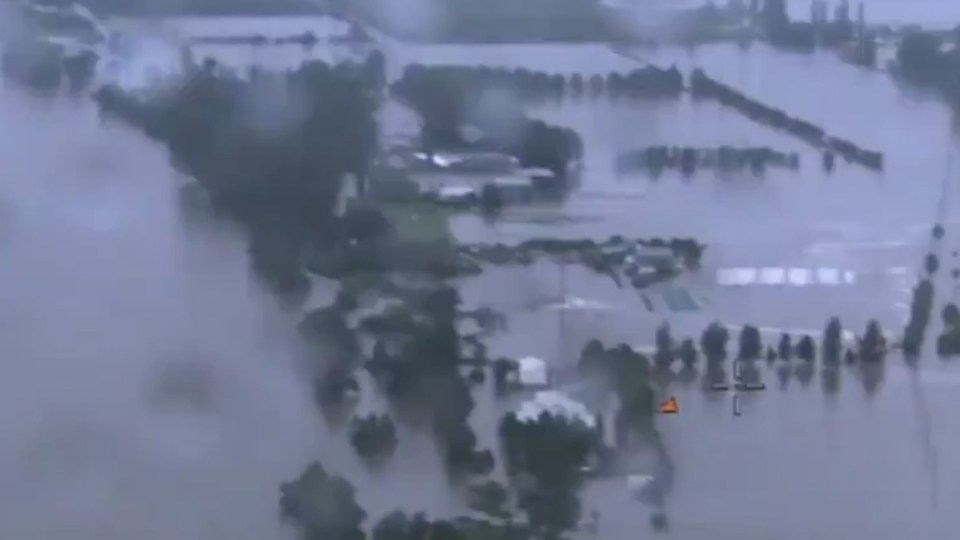 Footage shot by the NSW Rural Fire Service shows the "inland sea" across much of NSW. Photo: Twitter

NSW is in a “dangerous” situation after days of torrential rain that shows no sign of letting up.

Bureau of Meteorology flood forecaster Justin Robertson said the state was enduring “probably the worst flooding” he has seen.

“We have a flood watch that covers all the way from the Queensland border to the Victorian border, all of those coastal rivers,” he said.

“This is quite a dangerous situation NSW is currently facing.”

The crisis in NSW was illustrated by footage from the state’s rural fire service on Monday, showing “an inland sea” covering a vast area.

“There’s one strong message to impacted residents, really keep across the bureau’s flood warnings, they provide detailed forecasts … and keep across updates from local SES about what actions to take,” Mr Robertson said.

Flood forecasters from across Australia are working with the bureau in NSW so communities can receive timely updates, with rain forecast to keep falling until at least Wednesday.

Sydney, which has already had more than 240 millimetres of rain in four days, is forecast to get as much as 100 millimetres more by Tuesday night.

The Hawkesbury-Nepean River is expected to peak at 13 metres on Wednesday afternoon, and at near major flood level at Sackville overnight.

At Lower Portland, the Hawkesbury River is expected to peak at major flood levels about 4pm on Monday.

Mr Robertson said further flooding was also likely in Kempsey, and elsewhere in the state.

“We have also extended the flood watch to cover areas of inland
NSW and are particularly concerned about the north-western catchments of NSW,” he said.

Earlier, Premier Gladys Berejiklian said it was a “miracle” no lives had been lost as record-breaking floods pushed NSW communities still recovering from Black Summer bushfires, drought and COVID-19 to breaking point.

Homes have been swept away, livelihoods ruined and thousands evacuated amid torrential rain that has thrashed the region for days.

There were 20 evacuation orders in place from the mid-north coast to the Illawarra and western and north-western Sydney on Monday, and 18,000 people had been evacuation – with the SES warning more were likely.

Ms Berejiklian said the coming weeks and months would be extremely difficult for many NSW residents.

“All of us are thinking of you,” she said.

“I don’t know anytime in our state’s history when we’ve had these extreme weather conditions in such quick succession.”

Rob Costigan, from Pappinbarra near Wauchope, said losing his home after surviving fire and drought was a “kick in the guts”.

“We battled through the fires in 2019 to save the place just to have it washed away,” he told ABC TV.

“It is heart wrenching.”

Mr Costigan was able to save his dogs but holds grave fears for his livestock.

“The neighbours are saying that things are hanging from trees,” he said.

Nearby Port Macquarie has copped some of the highest rainfall totals, with more than 800 millimetres forcing SES volunteers to work 24-hour shifts, Superintendent Shane Cribb said.

Some 38 areas have been declared disaster zones, with those affected eligible to claim $1000 per adult and $400 per child.

Torrential rain that could threaten lives will hit a vast swathe of southern Queensland from Monday afternoon, including Brisbane, the Gold Coast and the Sunshine Coast.

The Bureau of Meteorology said very heavy rainfall, compounded by thunderstorm activity, would set in across the south and south-east, and the danger would continue until Tuesday morning.

The bureau said potentially life-threatening weather was expected in areas that were already sodden.

That includes the entire Gold Coast and its hinterland, Brisbane, Ipswich, and Maroochydore on the Sunshine Coast.

“Heavy rainfall leading to flash flooding is forecast to develop about the eastern Darling Downs & Granite Belts, and the south-east coast districts tonight and on Tuesday morning,” the bureau said in its latest warning.

“The situation is likely to pose a serious risk to already affected and flooded areas. In some areas, the situation may become life-threatening.”

Six-hourly rainfall totals of more than 150 millimetres are likely but some places could get more than that due to thunderstorms.

Inland, rainfall that could cause flash flooding is likely over the Channel Country from Monday afternoon.

Queensland’s interior has had flooding rain in recent days, and overnight the south-east corner copped a lashing, including flash flooding on the Gold Coast, in the Gold Coast hinterland, and in southern parts of Brisbane.

SES Queensland state co-ordinator Brian Cox pleaded with Queenslanders to heed warnings and stay off the roads unless travel was essential.