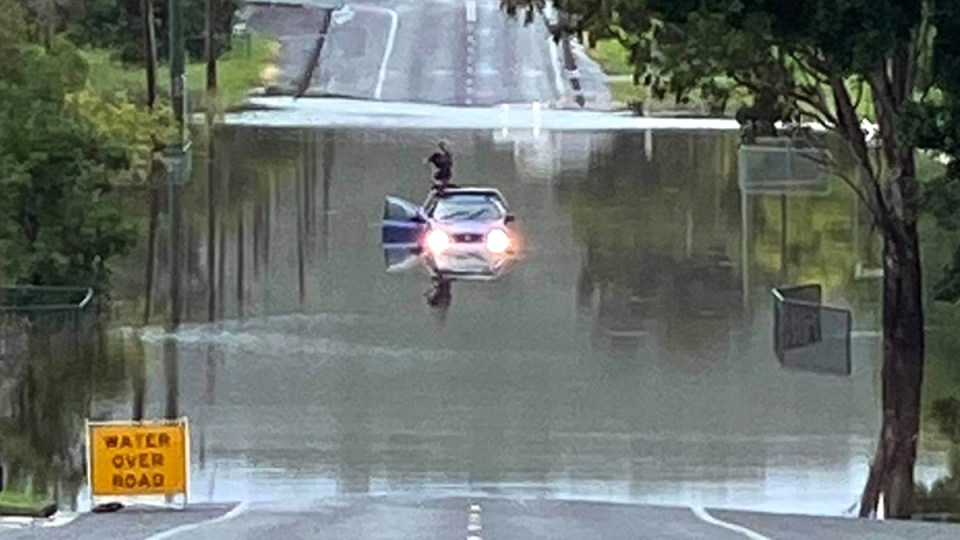 A motorist struck trouble in Bulahdelah, north of Newcastle, on Friday. Photo: Twitter

People in several areas of NSW’s mid-north coast were urged to evacuate on Friday afternoon as dangerous storms moved south towards Sydney.

“Once floodwater passes 1.75 on the Settlement Point gauge at Port Macquarie, a significant number of properties will be inundated,” the SES said.

“Once floodwater begins inundating the area road access, water, sewerage, power, phones and internet may be lost. If you remain in the area, you will be trapped and it may be too dangerous for SES to rescue you.”

It followed earlier warnings for Bulahdelah, north of Newcastle, and North Macksville, south of Coffs Harbour, and came as “life-threatening” rain continued to fall.

“The Bureau of Meteorology has predicting possible flooding along the Myall River for the Bulahdelah areas,” it said.

“Residents and visitors to these areas should take action now to prepare for possible flood impacts.”

Both came as heavy rain kept falling on the NSW mid-north coast, where some areas have had almost 300 millimetres in  24 hours.

MidCoast Council director of infrastructure and engineering said there had been some flooding in Gloucester after the Gloucester and Barrington rivers flooded the CBD and nearby caravan park.

“It is probably some of the heaviest rain I’ve seen in about 20 years on the coastal strip,” he said.

“There is the chance that we are looking at this rainfall to start moving down towards the Hunter region and the metropolitan area of Sydney overnight and tomorrow. It will continue until Sunday,” he said.

The SES has already had more than 2000 requests for assistance since the rain started on Thursday. It has carried out 37 flood rescues since 6.30pm Thursday – often for people who have tried to drive through floodwater.

“If the road is covered with water, do not attempt to drive, walk, or ride through it. The road underneath could be washed away, and it could be dangerous,” Mr Kearns said.

He also urged Sydney commuters to take note of the conditions during Friday’s evening peak.

“If they can avoid any unnecessary travel, please avoid that,” he said.

The deluge is expected to keep moving south, with Sydney to bear the brunt on Saturday.

“It’s really important for Sydneysiders to be mindful about reconsidering their plans, potential changes to driving conditions, and again the fact that the rainfall that we have seen over the last few days, really what we’ll see tomorrow will be substantially heavier, and potentially more dangerous.”

More rain is expected on Sunday, with another rain band crossing western NSW on Monday and Tuesday.

“We’re particularly concerned about those catchments in the broader Sydney area, and also the local Sydney metropolitan area, where we might see quite significant flash flooding,” he said.

“And we’ve got a flood watch current for both the Nepean and Hawkesbury rivers. We’re expecting that to be around the moderate level, but even higher flood levels are possible.”

“If you did have plans to travel on the roads, please reconsider,” she said.

“This weekend is going to be quite severe in terms of weather conditions, and we don’t want to see any lives lost because of that.

“Please follow the warnings, please stay home where you can, and don’t go travelling around on the roads.”