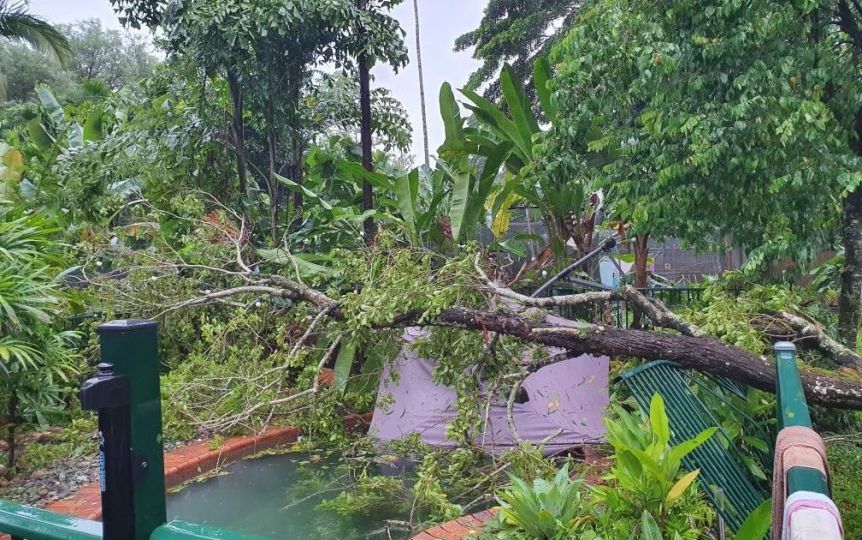 The slow-moving system was hovering about 120 kilometres off the north Queensland coast on Tuesday morning.

“Even though a direct coastal crossing is unlikely, we are seeing severe weather impacts out of the system already and we’re going to continue seeing them over the next few days before the system starts to retract further into the Coral Sea,” she said.

“It’s going to be a long few days for the communities in the region,” Ms Hoff said.

Rain has drenched parts of the coast with Alva Beach receiving 219 millimetres in the 24 hours to Tuesday morning, while Lucinda had 186mm and Groper Creek received 183mm.

The weather bureau is warning the system has sustained winds near the centre of 75kph with wind gusts of up to 120kph.

Communities between Cape Flattery and Lucinda are in the warning zone, with a flood watch issued for catchments between Cooktown and Rollingstone.

Six state schools and 28 Catholic schools have been closed.

Monday’s wild weather cut power to more than 40,000 properties from Cairns to the Cassowary Coast.

“We’ve got outages right across the board, which makes it all the more challenging for our crews,” Ms Oliveri said.

“We’ve got a lot of damage from vegetation, damage to the network, including fallen powerlines.

“In these conditions everything is changeable, and crews may not be able to get into certain areas if roads are cut due to localised flooding.”

Cairns-based State Emergency Service (SES) area controller, Peter Rinaudo, said they had received about 80 calls for help on Monday and crews were working to clear the backlog.

“We’ve had a fair bit of rain in the region … so the catchments and the ground are pretty soaked,” Mr Rinaudo said.

“Some of our gusts getting up around the 85 to 90 kilometre [per hour] mark – it’s knocking some of these trees over and pulling powerlines down.

“[We’re] not being able to do much in regards to leaking roofs – when you’ve got 85 kilometre per hour winds, it doesn’t lend itself very well to be holding a tarp down.”