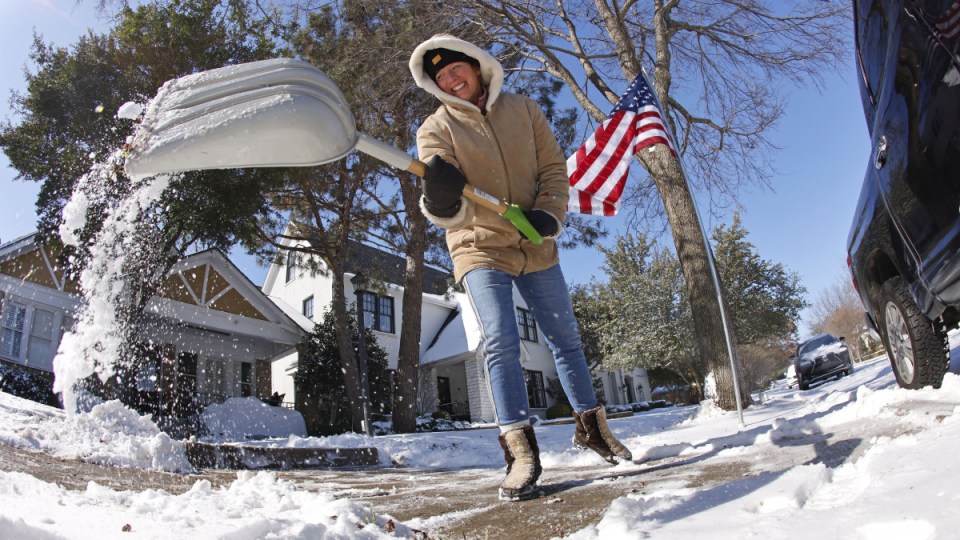 Honey Russell shuffles snow from the front of her property in Fort Worth, Texas. Photo: Getty

A sprawling blast of winter weather across the US is likely to blame for the deaths of two people in Texas.

The unusually snowy emergency on Monday (local time) knocked out power for more than four million people, shut grocery stores and air travel and closed schools ahead of frigid days still to come.

As nightfall threatened to bring more temperatures as low as -12 degrees, officials warned that homes still without power would likely not have heat until at least Tuesday, as frustration mounted and the state’s electric grid came under growing demand and criticism.

Law enforcement reported two men were found dead along Houston-area roadways. Causes of death were pending, but officials said the sub-freezing temperatures were likely to blame.

The storm is part of a massive system that has brought snow, sleet and freezing rain to the US’s Southern Plains.

It is also spreading across the Ohio Valley and the country’s north-east.

US President Joe Biden has declared an emergency in Texas, which intends to add federal aid to state and local response efforts.

It came as ice storms knocked out nearly half of the state’s wind-power generating capacity, locking up turbine towers while driving electricity demand to record levels.

An Arctic air mass causing the chill extended south, well beyond areas accustomed to icy weather. There were winter storm warnings for much of the Gulf Coast region, Oklahoma and Missouri, the National Weather Service said.

The storm hit on a three-day nationwide holiday weekend, with at least 3000 flights cancelled across the country. More than half were at Dallas/Fort Worth International and Bush Intercontinental airports in Texas.

A facility storing 8000 doses of the Moderna COVID-19 vaccine was among the sites affected by power outages across Houston.

Health officials had to scramble to find people to give the vaccine to at the same time as authorities were pleading for citizens to stay home.

“We are dealing with higher-than-normal generation outages due to frozen wind turbines and limited natural gas supplies available to generating units,” the agency said.

Of the 25,000-plus megawatts of wind-power capacity usually available in Texas, about 12,000 megawatts was out of service on Sunday (local time).

Forecasts call for heavy snow and freezing rain to spread across a larger swath of central and eastern sections of the country through Monday, with a storm front in the west likely to dump 30-60 centimetres of snow in the Cascades and northern Rockies through Tuesday.