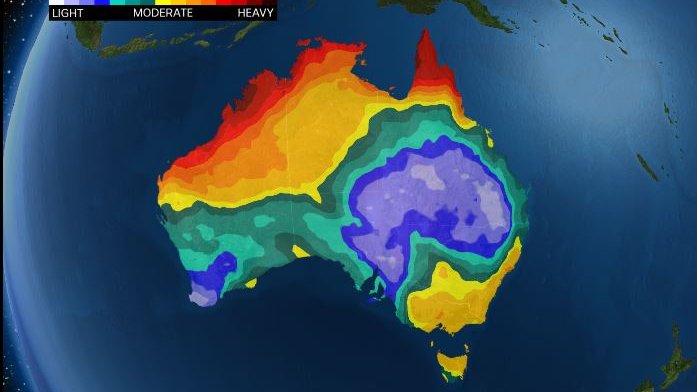 Where the rain will be the heaviest in coming days. Image: Bureau of Meteorology

Flash flooding is forecast with widespread rain expected to increase in the nation’s south-east today as temperatures plummet.

According to Jonathan How, senior forecaster at the Bureau of Meteorology, it has been a rapid turn around from last week’s heat.

“Summer is on vacation for the south-east after that heatwave,” Mr How said.

The wet conditions are thanks to the convergence of a rain band moving across from the west and a surface trough sitting over Victoria and NSW.

“That’s going to remain pretty stationary and so this other rain band to the west will move through and basically clash with this surface trough, triggering widespread rainfall and isolated thunderstorms,” Mr How said.

“Mainly through Victoria, the lower south-east of South Australia and into southern and west NSW and then extending into Tasmania as well.”

The heaviest falls are expected in northern Victoria and southern NSW on Friday, with northern-central Victoria and the Riverina expected to get the bulk of the rain.

“We are expecting widespread falls of 30 to 60 millimetres north of Melbourne and we could see isolated falls of up to 90 millimetres,” Mr How said.

“There is a risk of some flash flooding.”

Severe weather warnings and flood watches have been issued and you can keep on top of the warnings with ABC Emergency or on the Bureau of Meteorology website.

But it is supposed to be summer

According to Mr How, the rainfall itself is not that unusual for this time of year.

Those with long memories will recall there were a few similar rainfall events this time in 2020.

But the lower temperatures are more unusual.

“We are looking at temperatures two to eight degrees below average this time of year, across pretty much all the south-east and extending back into Western Australia as well,” Mr How said.

The cool conditions are thanks to cloud cover and air coming off the Southern Ocean.

“It’s really not going to feel like summer across the south-east,” Mr How said.

Make the most of the 24 degrees forecast for Saturday Melbourne, it is the highest temperature forecast all week.

Tuesday is only expected to get up to 19, with showers.

Hobart is nearly as cold, only expected to get up to 25 degrees on Saturday and Monday with cloudy, showery conditions persisting for the next week.

“Not really beach weather on the horizon, unfortunately,” Mr How said.

Low in the Bass Strait early next week

The rain should ease by Sunday but it might not be over – there is the potential for a cut off low to form over the Bass Strait early next week.

“We are looking at the potential for a fairly deep, low pressure system,” Mr How said.

Cut-off lows are tricky to predict, so this far out there is still a bit of uncertainty around where it could form.

But, according to Mr How, parts of Victoria, Tasmania and possibly South Australia could get fairly widespread rainfall.

Strong winds and big seas are also expected Monday and Tuesday and into Wednesday, so again keep on top of those warnings.

The tropics continue to be tropical

Meanwhile, the monsoon is continuing to deliver up north, with the BOM keeping its eye on two different lows.

The first is the one that has been making its way across Cape York over the past few days after failing to develop into a cyclone in the Gulf.

“That one didn’t quite make it to a cyclone, but it’s got another shot when it moves off to the Choral Sea into more open waters and it has much more time to develop,” Mr How said.

But at the moment it is looking more likely to remain offshore south of Papua New Guinea.

“So not going to pose an immediate threat to the mainland,” Mr How said.

The other is over the Kimberley and is forecast to bring falls of over 300 millimetres over the next few days.

Mr How said there were two possible scenarios for how this low is going to play out.

“The first one is that it remains over land of the Pilbara and just brings heavy rainfall as tropical low,” he said.

“The second scenario, which at this stage is looking more likely, is that it does move off into the open water of the Indian Ocean and does give it the chance for it to strengthen into a cyclone.

“Possibly as early as Sunday, but more likely into next week.”

So a damp to drenched week ahead for most of the country, but across in the west the heat is starting to rebuild.

“Perth is in for a run of very hot days and that will of course also bring elevated by dangers as well,” Mr How said.

“It really is a nation of contrast for the next week.”

‘Summer is on vacation’: Rain sets in, temperatures plummet