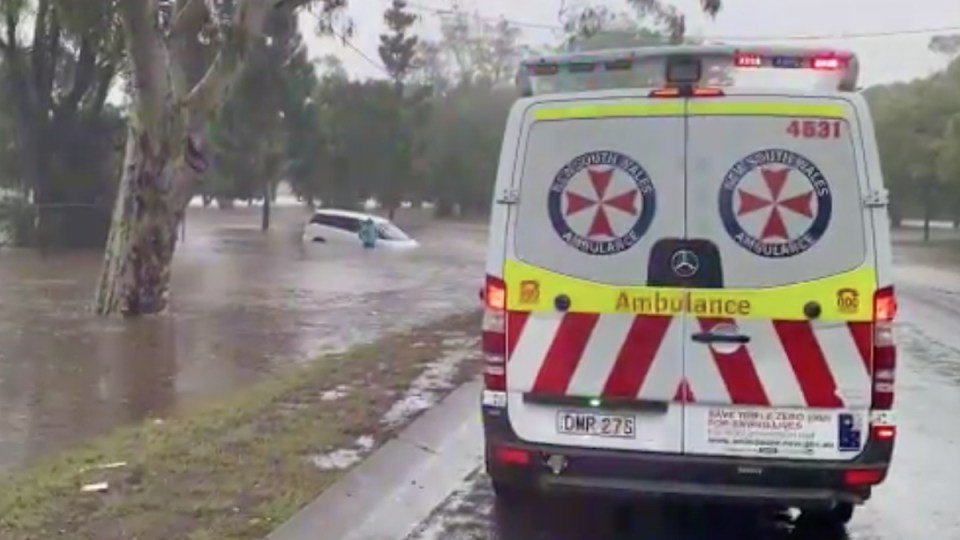 Emergency services were called out in Lismore after a downpour early on Wednesday afternoon. Photo: Twitter

The wild weather that has pummelled Australia’s eastern seaboard for days continued to cause havoc on Wednesday evening.

The predicted reprieve from heavy rain and flooding across swathes of NSW failed to eventuate, with only the state’s far west expected to be spared from afternoon thunderstorms.

Lismore in the state’s north copped more than 120mm in three hours on Wednesday afternoon, with the SES performing five flood rescues in just over an hour.

The Bureau of Meteorology is asking residents to avoid Lismore’s CBD due to flash flooding. The Wilsons River was expected to peak at Lismore with minor flooding at around 5pm to 6.9 metres.

On the mid north coast, Hillview recorded 79mm in just one hour on Wednesday afternoon.

The downpours come as the BOM issued a fresh warning for severe thunderstorms, with swathes of the state expected to be hit.

The warning zone stretches for almost the entire state _ from Mungindi near the Queensland border to Albury at the Victorian border. It covers all of the ACT.

Almost the entire coast will also be hit, with BOM issuing a separate warning for residents of the South Coast and parts of the northern rivers and the Snowy Mountains.

They’re expected to be hit with heavy rain, but it looks like they will escape the thunderstorms.

Rock slides, bridge closures and even a yawning sinkhole in a residential Coffs Harbour street have been caused by the extreme weather event.

The heavy rainfall means the BOM is renewing its calls for residents of northern NSW to watch for flooding.

In a weather alert on Wednesday, the Bureau of Meteorology said the rain could lead to flash flooding in areas such as Sydney, Lismore, Newcastle, Gosford, Wollongong, Armidale, Orange, Canberra, Goulburn, Tamworth, Moree, Dubbo and Wagga Wagga.

“Severe thunderstorms are likely to produce heavy, locally intense rainfall that may lead to dangerous and life-threatening flash flooding in the warning area over the next several hours,” it said.

They carried out five rescues in an hour as a downpour brought more than 100 millimetres of rain to Lismore in just two hours.

Across the border in Victoria, storms were also possible across much of the state a broad low-pressure trough drags moist and unsettled air into NSW and Victoria.

But it is not the same weather system that has brought torrential rain to northern NSW and south-eastern Queensland this week.

The BOM said heavy rain was likely along the NSW south coast and in parts of the Snowy Mountains on Wednesday afternoon.

It came as northern areas of NSW finally began to mop up after six days of heavy rain brought flooding and evacuation orders.

Rainfall rates were due to ease on Wednesday as the trough weakened – although was still predicted to pack a final punch.

The severe weather warning that has covered much of NSW’s north coast was cancelled by the weather bureau on Wednesday morning.

But showers and thunderstorms are likely to continue for a couple of days, bringing the risk of more flash flooding.

“Rainfall rates could be locally enhanced with thunderstorms, leading to the possibility of very heavy rainfall and dangerous flash flooding along coastal areas,” a BOM spokesperson said.

The weather agency is warning of possible major flooding of the Orara River at Coutts Crossing on Wednesday evening. Areas around the town may become inundated and isolated, the SES has warned.

Minor flooding is occurring on the same river at Glenreagh.

Evacuation orders remain in place in Condong and Tumbulgum, north of Murwillumbah.

The order came after the Tweed River burst its banks near Tumbulgum on Tuesday, with minor to moderate flooding in the area.

An SES spokesperson told AAP teams were assessing the infrastructure in the area, and the order won’t be lifted until they give the all clear.

Evacuation warnings are also in place for south Murwillumbah and north Macksville.

Flood warnings for the Tweed, Hastings, Nambucca and Camden Haven rivers have been downgraded after their peaks, but there is still a risk of flooding for a swag of other rivers down the coast.

The Macleay River is expected to peak in Kempsey around 6pm on Wednesday, with the SES anticipating that low lying areas, roads and bridges will be impacted.

Floodwaters in Grafton, Ulmarra and Maclean along the Clarence River are expected to peak with the high tide around midday.

Further south, minor flooding is still occurring in Bellingen and Thora, but river levels are falling.

Bungawalbin Junction and Woodburn are also expected to flood.

Coraki and Bungawalbin should see moderate flooding on Wednesday evening.

Since the downpours began on Saturday, the SES has attended more than 1900 jobs.

“The majority of those jobs are fixing leaking roofs and damage due to heavy rainfall or trees down due to strong winds and we’re also getting requests for sandbags,” an SES spokeswoman said.

Coffs Harbour had 142 millimetres of rain in the 24 hours to Wednesday morning, while there was 182 millimetres at Maria River.

The bureau said the Tweed Heads offshore wave rider buoy had recorded waves of about 5 metres, with one at more than 10 metres, in the 24 hours to Wednesday.

Flood warnings for the Tweed, Hastings, Nambucca and Camden Haven rivers were downgraded after their peaks, but there was still a risk of flooding for a swag of other rivers down the coast.

The Macleay River was expected to peak in Kempsey about 6pm on Wednesday. The SES anticipates that low-lying areas, roads and bridges will be affected.

Floodwaters in Grafton, Ulmarra and Maclean along the Clarence River were expected to peak with the high tide about midday.

However, inflows from the Orara River, combined with a high tide, were expected to cause renewed flooding in the three towns on Thursday morning.

A giant sinkhole opened up on a suburban street in Coffs Harbour on Tuesday after a pipe under a path apparently collapsed from the weight of the sodden soil.

“The road is open and we’re expecting it to be fixed by mid-next week,” a Coffs Harbour City Council spokeswoman told the ABC.