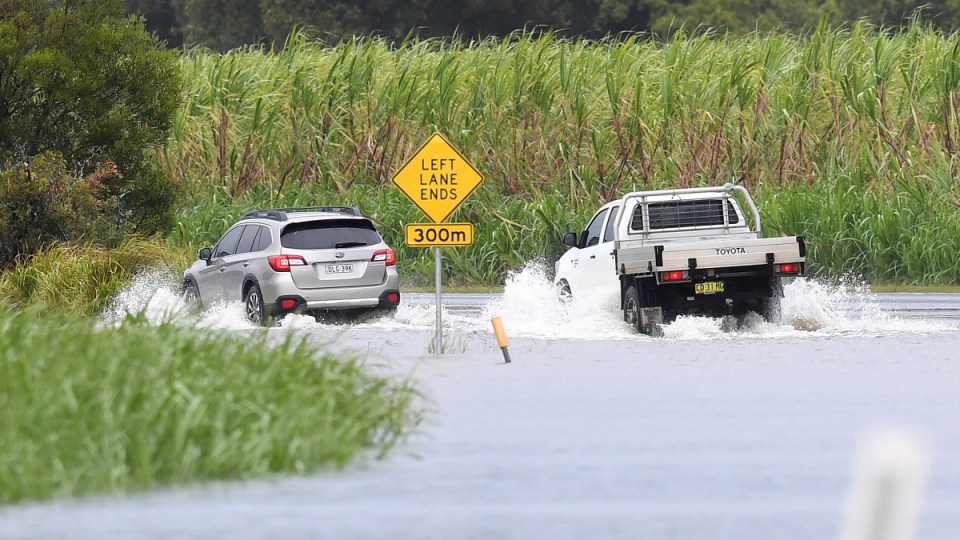 Cars drive through a flooded road at Tumbulgum, in the NSW northern rivers region. Photo: AAP

People living in low-lying areas along the Tweed River at South Murwillumbah and surrounding areas have been issued evacuation warnings and asked to prepare in case an order is issued.

SES spokesperson Greg Swindell stressed the warning meant only that people should prepare themselves to leave and monitor updates closely.

“We would rather be prepared and let people know what is happening as early as we can, but it is only a warning, it certainly is not an order at this time,” he said.

Among the areas urged to prepare were low-lying areas of South Murwillumbah residential and industrial estates, Greenhills Caravan Park, and residential and business areas bounded by the Tweed River.

People living around the the railway line, Alma Street and the southern end of Wardrop Street and Railway Street, Tweed Valley Way between Mistral Road and Rose Lane, as well as Tumbulgum and surrounding areas were also told to prepare.

Flooding along the Nambucca River at Bowraville (Lanes Bridge) is expected to become worse on Tuesday as heavy rain continues.

The river was expected to peak at five metres at 11am, the SES said.

“Based on the prediction provided by the Bureau of Meteorology it is expected the communities of Bowraville, Taylors Arm, Macksville, Nambucca Heads and surrounding areas will be impacted by dangerous floodwaters,” the SES said.

In Bellingen, south of Coffs Harbour, Lavenders Bridge connecting the north and south of the town has been cut off by rising floodwaters.

The town has received 180 millimetres of rain since Monday, and with floodwaters continuing to rise, authorities expected the Bellinger River would reach moderate flood levels at 8am.

In addition to flooding risks, the severe weather may interrupt essential services such as electricity, phones, internet, water and sewerage, the SES warned.

Just under 1000 homes on the North Coast were without power following the severe weather.

Essential Energy is working on restoring power but floodwater is preventing crews from accessing some areas.

NSW Premier Gladys Berejiklian warned that the past few days could be an indication of what the summer would hold.

“I am hoping what we have seen over the last few days won’t be repeated frequently over summer but it could,” she said.

“Our weather experts tell us they are expecting conditions worse than what we have seen in quite a number of years.

“I know for many residents in northern NSW, they are used to flooding conditions, but what the bushfire season taught us last year is to expect the unexpected.”

She said a full assessment of damage could not be done until the storm had passed.

Duty forecaster Helen Reid from the Bureau of Meteorology said the rain should begin to ease late on Tuesday or early Wednesday.

“Rainfall today will still be quite big but during the coming days it will ease off as that driving system weakens, we are expecting shower activity for the rest of the week but hopefully today is the last of the big rainfall.”

A severe weather warning is in place for damaging winds, heavy rainfall, abnormally high tides and damaging surf for an area stretching from Taree on the NSW mid-north coast to Tweed Heads, near the Queensland border.

Damaging surf was expected again on Tuesday, with waves of more than five metres causing more significant erosion at Byron Bay and Ballina.

Byron Bay Mayor Simon Richardson said sandbags had been some protection, but Tuesday’s high tide at 9.30am would cause more erosion damage.

He said accommodation had been busy but any lasting damage to the area was yet to be assessed.

“It is also a signal for us, for all of our communities across the country, that live in relatively fragile environments, that we need to do better,” he said.

“These are all climate change events in the past two years. We’ve had floods, we’ve had fires, we’ve had drought, we’ve had coastal erosion.

“If we want these sort of communities to have economic security, we need to be putting policies in place which actually protect them, look after them and seize the opportunities that are available.”

Tides are expected to remain higher than usual, leading to potential flooding in coastal areas.

It follows a high tide at Brunswick Heads on Monday that was 43 centimetres higher than expected.

Top rainfalls on Monday were recorded 40 kilometres south-west of Tweed Heads in Doon Doon, which got 155 millimetres in the 24 hours to 9am Monday.

Two children were swept away in fast-moving floodwaters at Tyalgum, west of Murwillumbah, prompting two adults to jump in after them.

All four were rescued by emergency crews.

The SES has responded to more than 1000 calls for help over the past few days.