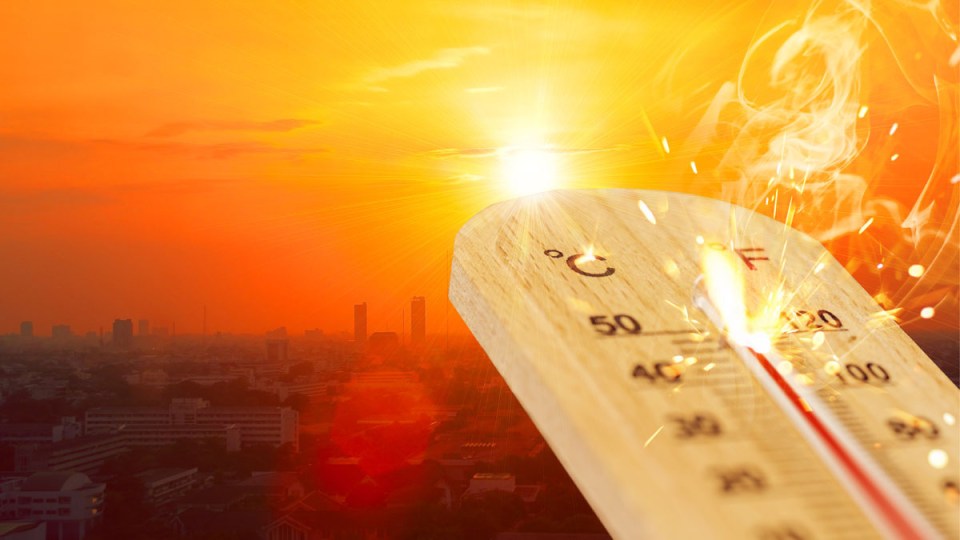 It is still a few days out from the official start of summer, but the heat is set to ramp up this week and Australians are being urged to heed health warnings.

Severe heatwave conditions are set to stretch across the continent – from north-west to the south-east – as heat is drawn down from the centre.

Swathes of the country face severe heatwave conditions and this will not be a one-day affair.

To hit the official criteria for a heatwave, the Bureau of Meteorology requires “three days or more of high maximum and minimum temperatures that are unusual for that location” – the heat is expected to hang around all the way into next week.

Where is it getting hot and when?

The heat has been building over northern and central Australia for weeks and, according to BOM senior forecaster Jonathan How, a cold front will push that heat into the south-east.

As of Wednesday, temperatures will heat up in South Australia and western Victoria and hit the high 30s.

From Thursday, the heat is expected to build and extend further over inland NSW.

By Friday, temperatures are expected to be 10 to 20 degrees above average for southern South Australia and western Victoria and reach the high 30s and low 40s.

Saturday is when the heat is expected to peak, bringing the first real blast of prolonged heat to the south-east – temperatures are expected to be up there with November records.

“At this stage, 46 to 47 degrees is looking like some of the high temperatures we will see on Saturday around central and eastern parts of South Australia,” Mr How said.

Sea breezes are likely to keep things cooler over Melbourne, but Adelaide will be the hottest capital, reaching 40 degrees on Friday and Saturday.

On Sunday, the heat will move into coastal NSW, including Sydney, where the city’s west is forecast to reach the low 40s.

The heat is expected to dissipate a little by Monday, but heatwave conditions are expected to move up into northern NSW and south-east Queensland.

It is not just the daytime temperatures that are cause for concern.

Nick Banks, state manager of emergency services for the Red Cross, said South Australia’s Telecross REDi program was up and running and ready to contact people registered as being at risk on extreme heat days.

Regardless of which state you live in, during extreme heatwaves we should be checking in on each other – in a COVID-safe way, of course.

“We encourage people to think about the people in your life, in your family, in your neighbourhood, who are likely to be more impacted by extreme heat and to think about what you can do to support them,” Mr Banks said.

The most at risk include the elderly, the very young and those with other medical conditions. People partaking in strenuous outdoor activity are also at risk.

It might be as simple as checking in with others on extreme heat days to ensure they are OK.

“You can have a conversation with them when hot days are coming up to make sure that they’ve got things in place to look after themselves,” Mr Banks said.

He said people should learn the signs of heat stress, heat exhaustion and/or heat stroke so they could intervene early.

Before extreme-heat days, there are things you can do to prepare.

Around the house you can use shade cloths and fans and it’s wise to check that your air-conditioner is working.

Use this period to make sure you have food, water and critical medication ready in advance – throwing a few ice blocks in the freezer is also a good idea.

On extreme-heat days, Mr Banks said the vulnerable, in particular, were advised to stay inside and out of the heat as much as possible.

“Plan outings and appointments early in the day or ask someone to help you with them,” he said.

He said other measures could include taking cold showers, splashing yourself with cold water or using a damp cloth to cool off during the day.

When is it going to end?

Unlike last weekend, this system is not expected to be associated with thunderstorms and high winds, which will lessen the fire danger to some extent, although elevated fire danger is still expected.

But without a proper clear-out of the atmosphere, the hot air will hang around.

“Once this heat burst does die off, it circulates back into Western Australia and builds again from midweek next week,” Mr How said.

For the heat to dissipate, he said, what we really need would be for the monsoon to start off across northern Australia.

“That’ll bring a lot more cloud and rain into central Australia to help clear that out.”

At the moment, all eyes are on the Madden Julian Oscillation (MJO), a band of volatile wet conditions that circles near the equator that is expected to move across northern Australia in the first half of December.

Combined with the still-present La Niña, it is expected to bring wet conditions early in December.

“That would certainly help to flush away some of that heat,” Mr How said.

While we wait for that cool relief, take it easy while in the sun, keep an eye on the fire warnings, and do a COVID-safe check on your elderly neighbours and relatives.