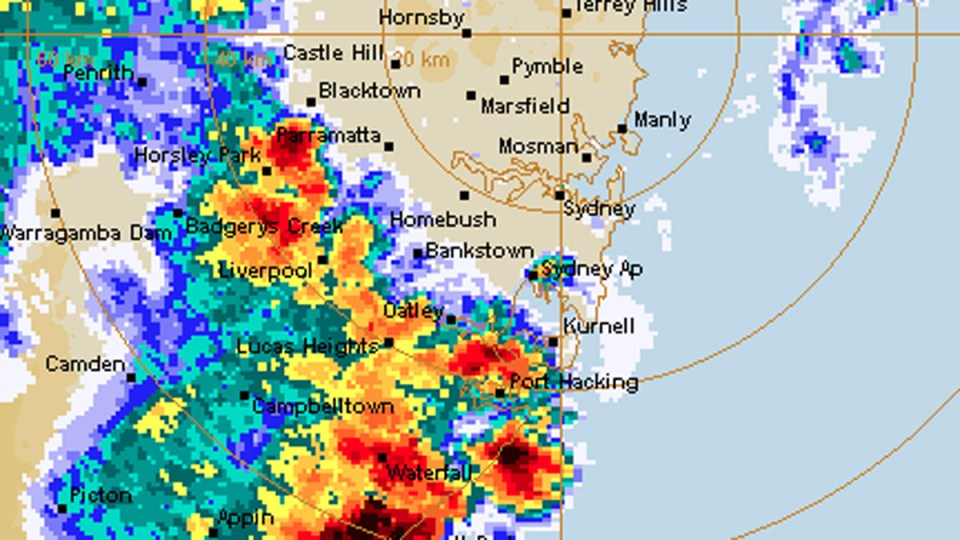 The storm heads for Sydney on Friday afternoon. Photo: BOM

Damaging winds and large hailstones have battered parts of inland NSW, with the severe weather expected to hit Sydney later on Friday.

The Bureau of Meteorology issued a severe thunderstorm warning for areas on the NSW coast between Newcastle and Wollongong, and as far inland as Dubbo, where there were strong winds and hail up to 2.5 centimetres wide earlier in the afternoon.

Nyngan local Pat Walsh was driving through Narromine about 1pm when hail started to fall.

“The temp was 31 degrees then dropped to 14 degrees in the storm,” he told the Nine network.

The fast-moving storm was likely to bring hail, winds of up to 90km/h and heavy bursts of rain, senior forecaster Jake Phillips said, but was unlikely to cause flash flooding.

Orange, Mudgee, Bathurst, Katoomba and Parkes were also in its path.

But the miserable weather will clear by Friday night, leaving NSW to swelter through a warm, dry weekend.

“By Monday we’re looking at temperatures around the 40-degree mark in western Sydney, but the coast will stay between five and 10 degrees cooler,” Mr Phillips said.