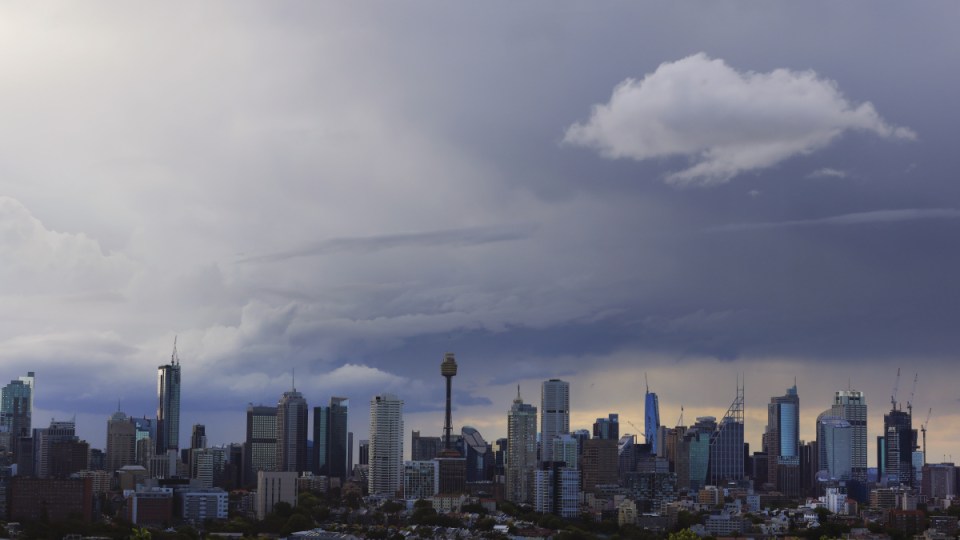 Dark skies over Sydney on Thursday. The wild weather isn't over yet. Photo: Getty

More miserable weather is on the way for parts of the NSW coast as a low pressure trough moving across the state brings storms and heavy rain.

NSW has been lashed by wet and windy conditions all week, with Sydney and the Central Coast on Monday copping a downpour that caused flash flooding and a landslide, and Tamworth on Thursday being pelted with tennis ball-sized hail.

Another low pressure system was forecast to hit south-west NSW on Thursday afternoon, with the trough expected to deepen on Friday.

That low will head east during Saturday, bringing showers to many areas, according to the Bureau of Meteorology.

“We could see some heavy falls, particularly on the central and southern coast of NSW, as that low moves out to the Tasman Sea,” bureau meteorologist Dean Narramore said.

Falls of up to 100 millimetres are expected along the coast before conditions ease later on Sunday.

South-eastern Queensland has also been battered by storms, bringing heavy rain and hail, this week. Power was cut to thousands of homes on Thursday, while Brisbane had more than 150 millimetres of rain in just four days.

In NSW, the State Emergency Service is warning residents not to drive, walk or ride through floodwater, and to avoid driving at all if the weather becomes extreme.

“Floodwater can wash out roads that once lay underneath and just 15 centimetres of water can start to float a small car,” an SES spokesman said.

An man died in hospital after a falling tree branch crushed his car in the Northern Tablelands.

The 68-year-old was driving a ute in Armidale on Wednesday when a large branch fell across the roof and bonnet, trapping him inside.

The man was eventually released and taken to Armidale Hospital, where he died on Thursday.

The SES are also urging NSW residents to get their homes storm ready, as NRMA reveals 54 per cent of all home claims it received last financial year related to storm damage.

The insurance company also surveyed 1000 people and found while 85 per cent were stressed about storm danger and damage, only 35 per cent had taken steps to prepare for severe weather.

Sydney’s Hills District and Hornsby region were the city’s most storm affected areas, while NSW-ACT border town Jerrabomberra was the worst hit in the state, according to NRMA data.