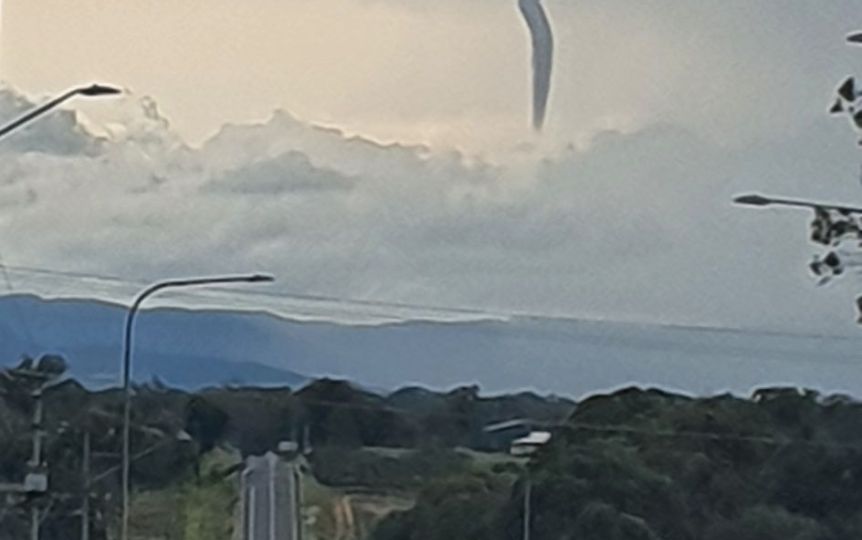 A cold air funnel is seen from Bracker Road in Warwick in the Southern Downs. Photo: ABC News

A remarkable cold air funnel has been spotted over Warwick, south-west of Brisbane, on Tuesday afternoon as severe storms move east across parts of southern Queensland.

A short time ago, a series of storm cells were moving east across the southern inland, impacting Nanango and Kilcoy.

“There’s potential for some of these storms to have destructive wind gusts, giant hail and very, very heavy rainfall.”

It comes after wild weather lashed eastern parts of Australia over the weekend, resulting in power outages in Queensland, rockslides on Sydney’s beaches and flash flooding in New South Wales.

Even southern regions received tropical totals at the weekend.

But it’s not just been the three-day totals that have been high – also remarkable is the rate at which the rain fell.

According to Bureau of Meteorology forecaster Jonathan How, Wallis Lake, north of Newcastle, recorded 124.5 millimetres between 1-2pm on Monday, while nearby Williamtown had 48.4 millimetres in the hour to 8am.

What’s next for the east coast?

From Tuesday, Queensland is looking at potentially dangerous thunderstorms from Mackay all the way down to the southern border.

“Locations that could see severe thunderstorms include places like Townsville, Mackay, Rockhampton, Bundaberg, and then down towards Brisbane and the Gold Coast as well,” Mr How said.

Damaging to destructive wind gusts, large to giant hail (in excess of five centimetres) and heavy falls leading to flash flooding are all on the cards.

On the NSW side of the border, storms are not expected to be as quite as severe on Tuesday. Wednesday might tell a different story, with severe thunderstorms expected across parts of the north-east.

Places such as Byron Bay, Coffs Harbour and the Northern Tablelands could all have dangerous conditions on Wednesday, while eastern Queensland will remain at risk.

“The threat isn’t over just yet,” Mr How said.

“We could see some pretty nasty weather and pretty high impact weather over the coming days.”

By Thursday storms could extend all the way into Victoria, but there is still a fair degree of uncertainty this far out.

At this stage, another low looks set to form over South Australia on Thursday.

“It’s looking like we could see another low pressure system forming over NSW, similar to what we saw in the weekend,” Mr How said.

“That could bring some rain for Victoria and southern parts of NSW.”

Eastern Victoria is expected to get showers in coming days.

With catchments already sodden, flash flooding and tree falls are a real risk.

More storms are also expected across the tropical north.

What about everywhere else?

The temperature will rise in the west from the middle of the week as hot air streams down from the interior.

“We will see temperatures right across south-west parts of WA getting 10 to 16 degrees above average.”

For once Tasmania has enviable weather – it’s sitting pretty under a high pressure system with just a few coastal showers in the east.

There is a chance, however, that the next system could move over and rain on the Apple Isle’s parade on the weekend.

When will it end?

“It is peak thunderstorm season for parts of Queensland and NSW,” Mr How said.

“We are in a very classic springtime pattern right now, with storms along the east coast most days.”

There could be a break early next week when a high pressure system moves across, but the storms will return thereafter.

With La Niña in the mix it is looking even wetter than usual – so if ever there was a time to prepare that storm plan and emergency kit, this is it.

Keep up to date with warnings this season on the ABC Emergency website, and remember to heed the advice of your local emergency services.

Rain, hail and not a lot of shine – wild weather to continue