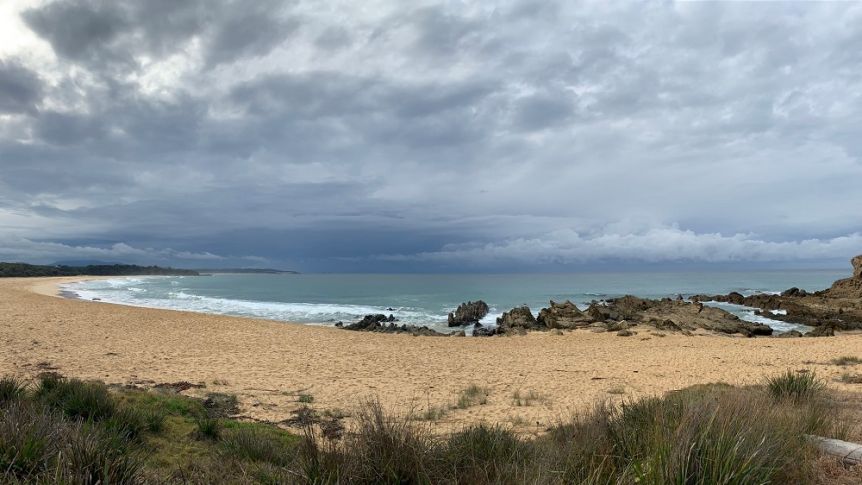 Spring is almost here – and it will be wetter than normal, the weather bureau predicts. ABC South East: Daniel Doody

The Bureau of Meteorology’s spring outlook suggests we could be in for a wetter-than-average spring for eastern Australia, but after a dry start.

Naomi Benger, climatologist with the BOM, said the rainfall outlook was broadly neutral or for slightly below-average rainfall for the end of winter and start of spring.

Over the next few weeks, drier conditions are expected through central Queensland, the Northern Territory and northern Western Australia – regions that would typically be dry this time of year anyway – but also for the agricultural areas of South Australia, western Victoria and southern WA.

This might be surprising news, given the BOM announced a La Nina alert, with a 70 per cent chance of the traditionally wet climate driver occurring by the end of the year, just last week.

Dr Berger said we were seeing the atmosphere respond to the cooler waters through a strengthening of the trade winds, as would be expected with a La Nina.

“What we need is also the weather systems which are conducive to rainfall to move over our region to actually deliver that extra moisture,” she said.

And for the next few weeks, that moisture is expected to be blocked by a high pressure anomaly to the south of Australia.

But as we move into September, Dr Benger said the effect of the La Nina was expected to dominate.

“As we move further through into all of spring, September to November, we’re really seeing the effects of these cooler waters bringing enhanced chances of rainfall across pretty much the eastern two-thirds of the Australian mainland,” she said.

The next few weeks of dry weather is expected to coincide with above-average temperatures, but cloud cover associated with that potential rainfall later in spring is expected to bring neutral temperatures for a large band across central Australia.

So how’s it been?

It may have felt wet recently, and some places such as the south-east coast of NSW and eastern Victoria and Tasmania have certainly had above-average rain this winter.

According to Dr Benger, August had been wetter than average for a lot of areas, particularly in central parts and the southern coast of WA.

“That’s why a lot of those long-term rainfall deficits are still persisting, even though we’ve had some rainfall and lots of places look quite green, the subsoils are still quite dry.”

What about the dams?

It might not have been the wettest winter, but things are at least on the up for many drought-stricken communities, especially for regions in NSW, where things were looking pretty dire a year ago. 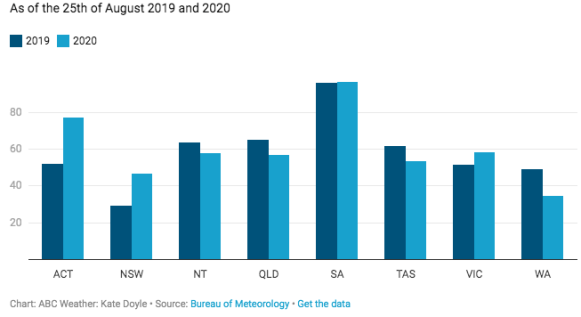 Tony Webber, a spokesperson for Water NSW, said since the end of February, there had been good rainfall across vast areas of the state.

The Sydney network went from about 40 per cent to near full; Warragamba Dam is now all but full at 99.8 per cent.

“As far as water security for the greater Sydney area goes, we’ve seen one of the largest storage increases in a six-month period possibly since the 1960s,” he said.

“The immediate water security concerns for greater Sydney have now been put on the backburner for a number of years.”

Other storages in southern NSW are also looking good; Burrinjuck Dam at the head of the Murrumbidgee River is at 82 per cent and rising.

“Inflows into that storage this month we’re the fourth highest monthly total in at least 10 years, so that dam is rising quite quickly,” Mr Webber said.

“Based on what the BOM are telling us, as far as rain forecasts for spring, there’s a real possibility Burrinjuck Dam could fill.”

Central parts of NSW, hit hard by the drought, have also had dam levels rise.

Burrendong Dam on the Macquarie River fell to less than 1.5 per cent capacity in February; it is now at 42 per cent and rising slowly.

Wyangala Dam, which was about 8 per cent at the end of summer, now sits at 55 per cent.

The situation, however, gets less cheery as you get closer to the Queensland border.

Some places still well behind

“Keepit Dam is clawing its way back to 24 per cent,” he said.

That might not seem like much, but until recently the dam sat all but empty for the better part of 12 months.

It is a similar story for the other northern storages.

Split Rock Dam, on the upper Namoi River, is still at less than 5 per cent capacity, while Copeton Dam on the Gwydir River is at 16 per cent.

To the west, flow rates might have fallen recently, but Mr Webber said there was enough water in the Menindee Lakes to guarantee supply to the lower Darling River for the next 18 months.

He said it was certainly an improvement on the situation last year and it was tempting to forget.

“With the rainfall that we’ve seen and with the countryside much greener and these dam storages rising, it’s easy to put the recent years of drought out of our minds.

“But we need to be mindful that this is a precious resource and the more of it we have available, the better.”

BOM’s spring outlook? It’s going to be wetter than average