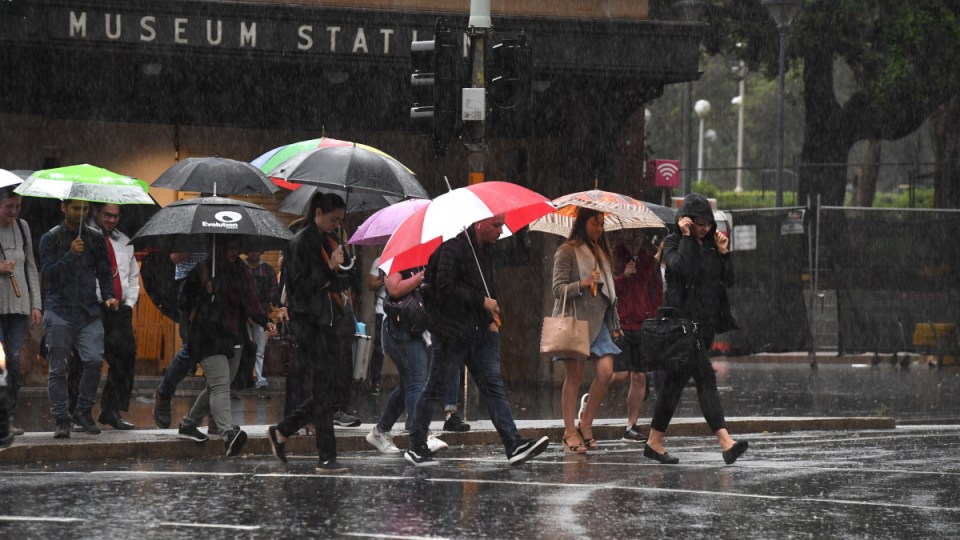 The weather bureau says most of us are in for a wetter than average winter this year. Photo: AAP

There is a more than 70 per cent chance of above average rainfall for much of inland Australia this winter, according to the Bureau of Meteorology.

After years of drought rainfall is welcome news, but how much do our farmers actually need?

Andrew Watkins, head of long-range forecasting at the Bureau of Meteorology says we are certainly looking at above average rainfall for much of the country.

But there are exceptions.

The Great Dividing range acts as a rain shadow, according to Dr Watkins, meaning those east of the divide are likely to miss out on the wetter than average conditions, along with Tasmania and south-west Western Australia.

But most of the areas missing out are at least looking at around average rainfall, an improvement on the past few years where the outlook has been for decidedly below average conditions.

“It’s great to see some dark green on the maps, particularly in western NSW and south-west Queensland, where of course we’ve had quite extreme drought conditions now for the past two to three years,” Dr Watkins said.

The rain is expected to keep daytime temperatures below average for regions lucky enough to get it, but the clouds are expected to act like a lid on a pot to keep overnight temperatures warm, according to Dr Watkins. 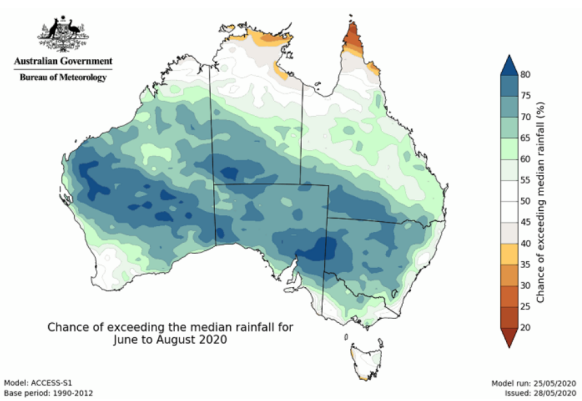 What’s going on with the climate drivers?

There is still less than a 50/50 chance of hitting the criteria for the wet climate drivers, La Nina and a negative Indian Ocean Dipole, in 2020.

But it doesn’t have to hit the criteria to be wet.

The Indian Ocean is warm at the moment, especially near Australia and Indonesia.

“When those warm waters are closer to Australia, they tend to supply more moisture, more cloud and then we get those north-west cloud bands,” Dr Watkins said.

“Those cloud bands that sweep across the country and tend to bring better rainfall to inland parts of the continent.”

Meanwhile, out to the east in the Pacific Ocean there are warm waters around Papua New Guinea and north of the Solomon Islands.

“That tends to increase moisture and the cloud over the Coral Sea. So we might see a bit more moisture coming in from the east as well,” Dr Watkins said.

He is further reassured by the international models, which also suggest a wetter than average winter for most of Australia.

Rohan Brill, an agronomist, farmer and researcher based in the NSW Riverina, said most farmers in the state would have their crops in the ground by now.

The exception will be those croppers further north planting chickpeas or durum, which tend to go in a little later.

In 2020, unlike the past few years, they have been able to plant into wet soils, rather than dry sowing and hoping for rain.

“We’re not in a position where we have to build reserves this year because we have had a reasonable late summer and autumn, so we’ve actually got some sub soil moisture,” Mr Brill said.

How much is too much rain?

The perfect amount of rainfall is highly dependent on exactly where you are.

The last big, wet year for eastern Australia was 2016 but, according to Mr Brill, it was too much rain for many areas in southern NSW.

“It was actually quite hard for many people, 2016, because it rained lots and it should have been a reasonable year.

“Usually in a high rainfall year, you want to make some cash and put it away for dry years but when it’s too high rainfall you obviously can’t do that.”

While a big rainfall event would bring confidence, he said a few showers sweeping through over the winter would keep them going.

“Because we’ve got moisture reserves, an average rainfall year would be perfect really for most people.

“Or we could handle even slightly below average because we’ve got above average stored water at the moment,” Mr Brill said.

But Scott Bowman, in Carnamah, in the northern wheatbelt of Western Australia, chuckled when asked about too much rain.

“That hasn’t happened for a fair while. Too much is probably when we start getting waterlogged crops but that doesn’t really happen very often where we are.”

So far this season things have been drier in the west.

Mr Bowman said most of the crop around him had gone in dry but the rain over last weekend should get most of it up.

There is still a little more to go in, according to Mr Bowen, and some to re-seed after the horrific wind last Sunday associated with out of season ex-tropical cyclone Mangga.

But there is some sub-soil moisture and it’s looking OK at the minute, according to Mr Bowman.

How much rain he would like to see fall?

“As much as we can get probably.

“If we got another 300 millimetres over the next couple months, we’d be going for a really good crop.”

And the outlook for winter is … wet