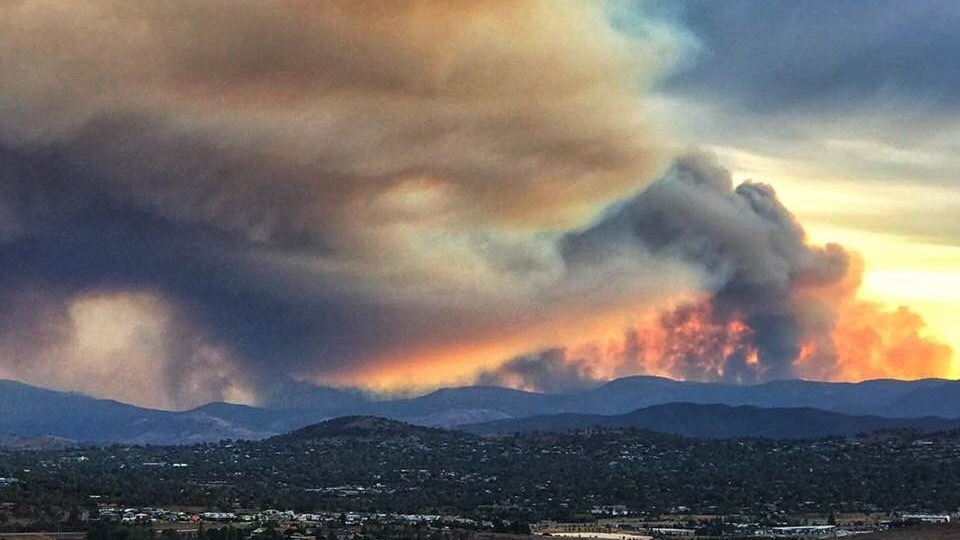 Conditions are set to worsen over the weekend with temperatures expected to hit the low 40s. Photo: Twitter

A state of emergency has been declared in the ACT as Canberra faces its biggest bushfire threat in 17 years.

Chief Minister Andrew Barr made the announcement on Friday, with an 18,500-hectare fire in the Namadgi National Park set to threaten homes in the capital’s south over the weekend.

The fire was at emergency level on Friday afternoon, with projections suggesting Canberra’s southern suburbs were at most risk.

The bushfire threat comes as federal parliament is set to resume next Tuesday, with the first sitting day to be dedicated to condolences after more than 30 people died during this summer’s horror fire season.

Mr Barr said Canberra faced its worst bushfire threat since the devastating fires of 2003 when up to 500 homes were destroyed and four people died trying to escape bushfires in the city’s suburbs.

“I understand the anxiety this announcement will cause, especially for those who lived through the 2003 bushfires,” he said.

“This is the first time a state of emergency has been declared since that tragic event.”

Mr Barr said that one of “the many lessons” learned from the 2003 fires was “the need for early, clear, and effective communication with the community on the risks ahead, allowing people to plan and make decisions on whether they’ll stay or when they will go”.

Mr Barr made the emergency declaration with temperatures set to rise over the weekend, giving residents time to put bushfire plans into action and amid fears fire resources will be insufficient.

“The combination of extreme heat, wind and a dry landscape will place suburbs at Canberra’s south at risk in coming days,” he said.

The out-of-control fire had already burnt 8 per cent of the ACT by Friday afternoon.

Canberra faces consecutive days of 41 degrees on Friday and Saturday, with storms and 35 degrees predicted for Sunday.

Evacuations and road closures are possible as the fire edges closer to Canberra.

Community members in Tharwa Village have been told they “need to remain vigilant”, as have those living near Boboyan Road, Apollo Road, Top Naas Road and Naas Road.

Residents in Canberra’s southernmost suburbs, including Banks, Gordon and Conder, have been told to “monitor conditions closely and be ready to act”.

ACT Emergency Services Commissioner Georgeina Whelan said Saturday was expected to be the most dangerous day with “textbook” fire conditions.

“What are the 10 things contributing to having a really, really dangerous fire? They are lining up,” she said.

Heat, fire index rating, the territory’s topography and fuel loads are among the leading causes of concern.

Fears are growing the fire could break containment lines with ground crews having access to just one per cent of the spread due to inaccessible terrain.

“It has been unpredictable. It remains challenging. It is difficult to access. This fire could create its own weather system,” Ms Whelan said.

“If all of what I have just outlined occurs, there is a chance this fire could break containment lines.”

This is the huge blaze in Canberra that has authorities worried. The valley separates it from hundreds of homes. @10Daily @10NewsFirstSyd pic.twitter.com/tsVzpYpGmv

Smoke is making it difficult for aircraft to fly over certain areas of the fire ground.

Mr Barr said the declaration was made to allow Canberrans, especially those south of Tuggeranong, time to prepare for the weekend.

“The state of emergency is the strongest signal we can send to the ACT community that they must prepare themselves and their families,” he said.

Meanwhile, Australia’s politicians will use the first parliamentary sitting day of the year to pay tribute to the victims of the devastating bushfire crisis.

Federal parliament returns on Tuesday, with the day to be dedicated to condolences after this summer’s horror bushfires.

Legislation to make fire relief payments and loss-of-income grants for volunteer firefighters is set to be rushed through both houses by the end of the week.

It includes grants for businesses and farmers, as well as disaster recovery allowance payments.

The government is also trying to put out political fires with a pair of cabinet ministers feeling the heat.

Nationals deputy leader Bridget McKenzie is under immense pressure to resign over the sports rorts scandal, with Labor and the crossbench set to trigger a Senate inquiry into the issue.

Senator McKenzie might also have to stare down internal tensions at a party room meeting on Monday.

Labor will also be keen to reapply the blowtorch to Energy Minister Angus Taylor over doctored documents used to attack Sydney’s mayor.

The South Australian Liberals will choose a replacement for former senator Cory Bernardi ahead of the sitting fortnight.