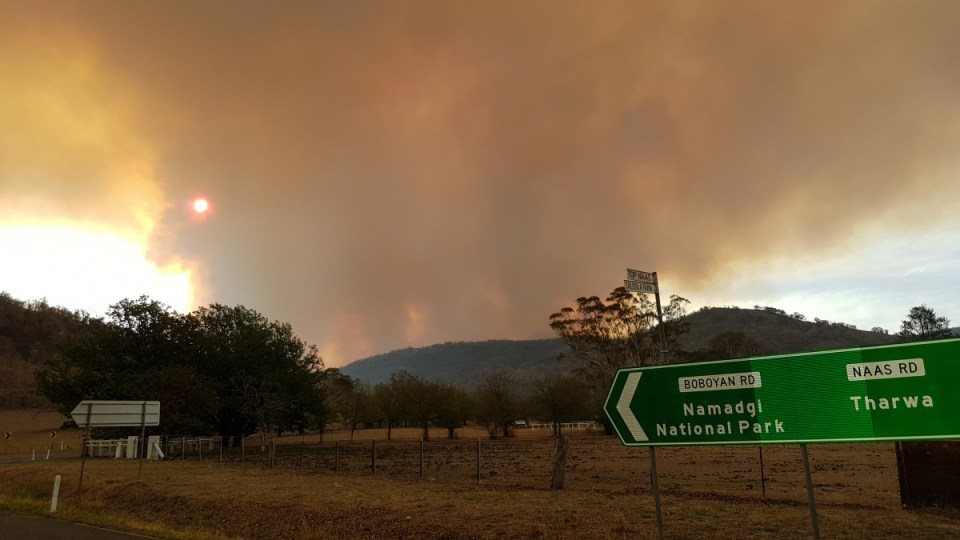 The fire in the Namadgi National Park south of Canberra is expected to be a growing threat in coming days. Photo: AAP

Temperatures have soared across Australia’s south-east, sparking fears of renewed fire danger in three states and the ACT after a week of respite.

Temperatures in Melbourne and Victoria’s north climbed towards 40 degrees on Thursday, with even hotter weather expected on Friday.

Central and western NSW was forecast to be even hotter throughout the weekend.

It will also be well above 40 in South Australia. Severe bushfire conditions were declared for six districts on Thursday ahead of soaring temperatures and rising winds.

Adelaide was forecast to reach 42 degrees on Thursday, while Cummins, on Eyre Peninsula, was expecting 46.

Storms will move across SA on Friday ahead of heavier weekend rain.

A exceptionally humid airmass moving into SA will trigger large areas of potentially severe thunderstorms in the north this afternoon and over most areas Friday. Heavy rainfall leading to localised flash flooding and damaging winds are the greatest risks. https://t.co/5wxFrWeCue pic.twitter.com/70P2emiF6L

In NSW, the weekend will bring the most dangerous conditions. Firefighters have urged communities near blazes in the state’s south-east to remain vigilant.

“Elevated fire dangers are set to return over coming days. It is important that you’re prepared in the event a fire threatens,” the NSW Rural Fire Service tweeted on Wednesday.

The heat is coming from a system of hot air moving south of the Australian continent that will drag hot air across Victoria and the NSW coast.

“Broad areas of western NSW, out towards the South Australian border and into the western slopes may not drop below 30 degrees for some nights over the next few days,” Ms Golding said on Wednesday.

58 bush and grass fires are burning in NSW, 20 still to be contained. Firefighters are strengthening containment lines ahead of deteriorating conditions over coming days. Hot, dry and windy conditions with widespread Very High and Severe fire dangers forecast for NSW. #nswrfs pic.twitter.com/midMFZY1IS

There are more than 70 fires burning across NSW.

There is also the 15,000-hectare Orroral Valley fire in the ACT, where firefighters have been taking advantage of cooler conditions to try to contain it.

ACT Emergency Services Commissioner Georgeina Whelan said hot and windy conditions plus a potential thunderstorm were expected over the weekend.

“In a sense the fire will be waking up this afternoon,” Ms Whelan said.

“What we do not want to do is alarm the community, we want you to remain alert.”

ACT Emergency Services Minister Mick Gentleman said a state of emergency was likely to be declared – a step up from the current state of alert.

Authorities say it is the most serious blaze the capital has faced since 2003, when bushfires destroyed almost 500 homes and led to four deaths.

Max temperature forecast for Friday. Severe heatwave conditions developing this week, with very hot and humid days and nights to come before a change moves across #Victoria on Saturday. Check your forecast here: https://t.co/x7fOGUJqJs #VicWeather pic.twitter.com/wHLaoC8JUN

“Friday is a significant day for us with elevated fire conditions,” he said.

“There’ll be storms that come through with the potential for dry lightning, so again it’s a challenging day for us.”

Victoria – where 43 has been forecast for Melbourne for Friday, with 45 inland – faces a dual challenge from the heatwave. A “tropical plunge” with bring welcome rain, but also high humidity and a risk of flash flooding.

“There is also the risk of damaging winds … And we will see some elevated fire dangers as well in northern parts,” Diana Eadie from the weather bureau said.

“There is, of course, the risk of lightning starting new fires as well.”

Victoria had 10 active fires late on Thursday afternoon, and 1.5 million hectares of land had been burned this summer.

Tasmania won’t escape the danger, with walking tracks closed in the island state on Thursday and Friday due to severe fire danger.

Hobart is forecast to reach 38 degrees on Friday, and there are fire bans across much of the state.