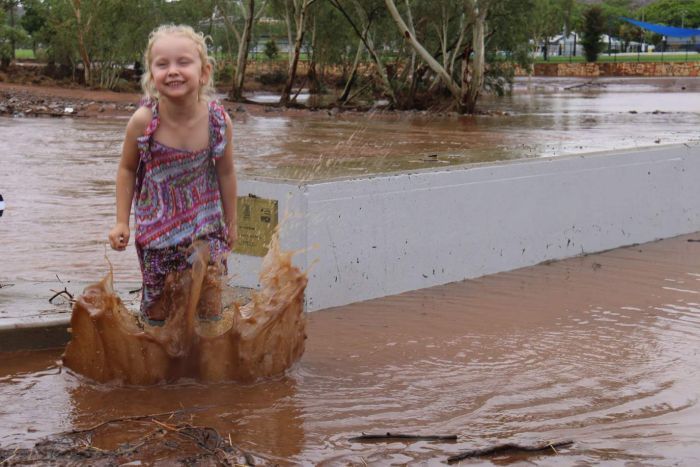 North Queensland communities have been warned to prepare for “life-threatening” floods after more than half a metre fell of rain in some places in just over 24 hours.

Water levels rose quickly in the town of Ayr, just south of Townsville, on Tuesday after an extraordinary deluge dumped 458 millimetres in the 24 hours after 9am Monday.

Burdekin mayor Lyn McLaughlin said the Bruce Highway was cut between Ayr and Home Hill, on the southern side of the Burdekin River.

Roads in Ayr itself were also closed with only emergency vehicles allowed to pass.

“We’re not letting any trucks through … because the bow waves from moving traffic is pushing water towards businesses and houses,” Ms McLaughlin told the ABC.

Rita Island, just south of Ayr, had even more rain – 615 millimetres in the same 24-hour period.

The deluge was driven by a slow-moving tropical low sitting over the waters of the Gulf of Carpentaria, and also bringing wild weather to that region. On Tuesday morning, the Bureau of Meteorology issued a severe thunderstorm warning for the area.

“Intense and prolonged rainfall may be dangerous and may lead to life-threatening flash flooding,” it said.

⚠️ Severe Thunderstorm Warning for Intense Rainfall isolated over southern parts of the Herbert and Lower Berdekin District. Intense and prolonged rainfall may be dangerous and may lead to life threatening flash flooding. Find all warnings here: https://t.co/Alcn02DAse pic.twitter.com/82ZRfVLGUK

There has also been significant rain at Winton, in Queensland’s parched central west, with locals praying for follow-up rain that will make a real difference to graziers.

More rain – on top of the 120 millimetres had had fallen since Monday morning – would ensure growth in paddocks that have been dry for far too long.

“If we can get some more in another month or so, that’ll just really set people up for the next six months,” Winton mayor Gavin Baskett said on Tuesday.

State Emergency Service crews have been brought into Townsville to prevent flood damage after heavy localised falls. The city has recorded more than 120 millimetres of rain, while Nelly Bay on Magnetic Island has had 216 millimetres.

“The community does need to be mindful, and remember if it’s flooded, forget it,” she said.

She said there were no concerns at this stage that the low pressure system would cause a repeat of the devastating floods of February last year, which caused more than $1 billion of damage.

“At the moment it’s acting like a typical wet season where we see downpours with significant breaks in between,” she said.

“So far it’s pretty much been business as usual.”

The weather bureau also said it was unlikely the region would have flooding to the same levels as this time last year.

“Simply the system isn’t going to be around for long enough to produce the same levels of inundation and rainfall,” spokesman Harry Clark told the ABC.

“The flip side of that is it’s probably going to be some of the best rainfall they’ve had in quite a substantial period of time.”

Flood warnings of various levels were been issued for rivers across Queensland on Tuesday.

Isolated heavy falls in catchments upstream have flooded the Paroo River – in the state’s south-west – with bridges cut at Eulo. The river is expected to reach a moderate flood level by mid-week.

“It’s been patchy, with some properties receiving a bit more than others,” she said.

“As long as it keeps coming.”