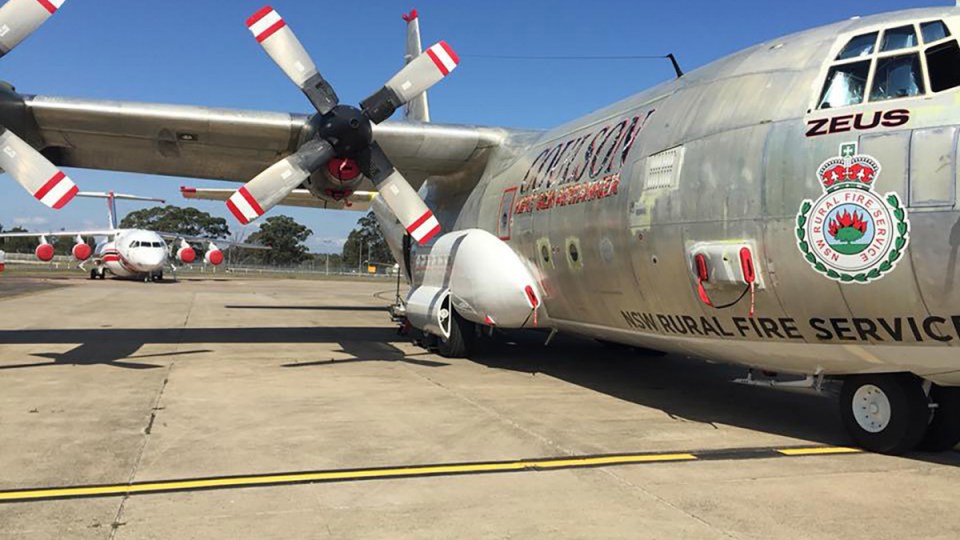 The three firefighters who died in a fireball after their aerial water tanker crashed while battling blazes in southern New South Wales on Thursday were American.

The plane was owned and operated by Canada-based company Coulson Aviation and contracted to the RFS.

After leaving Richmond RAAF base in western Sydney at 12.05pm, online flight radars showed the tanker – owned and operated by Canada-based company Coulson Aviation and contracted to the RFS – flying south-west before vanishing near Peak View, north-east of Cooma.

RFS commissioner Shane Fitzsimmons confirmed that all three were US residents.

“Tragically there appear to be no survivors as a result of the crash. It’s impacted heavily with the ground and initial reports are that there was a large fireball,” he said.

Commissioner Fitzsimmons paid tribute to the crew, who were well known to local firefighters.

“The firefighting fraternity is a tight-knit family, a fairly small family and the crew on board were well known, not just to their colleagues here in Australia,” the commissioner said.

“Our hearts are with all those that are suffering what is the loss of three remarkable, well-respected crew that have invested so many decades of their life into firefighting.”

Our thoughts are with the family, friends and colleagues of the three crew who were involved in this very tragic event. It will be felt by many. Take care https://t.co/xOaZwJHSlG

Coulson Aviation grounded its fleet in NSW and Victoria in an attempt to rule out systemic issues such as possible fuel supply problems.

“The aircraft had departed Richmond with a load of retardant and was on a firebombing mission,” the company said in a statement.

“The accident is reported to be extensive and we are deeply saddened to confirm there were three fatalities.”

The cause of the crash will be investigated by the Australian Transport Safety Bureau, with support from NSW Police.

NSW Premier Gladys Berejiklian said the crash was a “stark and horrible reminder” of the dangerous conditions facing firefighters on a daily basis.

“It allows us to consider the circumstances people face every day,” Ms Berejiklian said.

“We have more than 1700 volunteers and personnel on the field today.”

Prime Minister Scott Morrison tweeted: “Deeply saddened to learn of the death of 3 people in the crash of a C130 fire fighting aircraft, northeast of Cooma in NSW earlier today.”

“My deepest condolences to the loved ones, friends and colleagues of those who have lost their lives. Such a terrible tragedy.”

Federal Opposition leader Anthony Albanese said the crash was “yet another tragic reminder of the extraordinarily dangerous conditions our emergency workers are facing”.

The NSW death toll from this season’s unprecedented fires has now climbed to 24 while more than 2000 homes have been razed.

The NSW Rural Fire Service is investigating reports of a serious incident involving an aircraft in southern NSW this afternoon.
Contact was lost with a Large Air Tanker which was working in the Snowy Monaro area. #nswrfs #nswfires pic.twitter.com/i6u1mlZsZ0

Elsewhere, an emergency bushfire alert forced the closure of Canberra Airport on Thursday afternoon, with all flights to and from the airport grounded.

Water bombers were closing in on the fast-moving grass fire near Canberra airport, as those inside the airport and nearby residents were told it was too late to leave.

The out-of-control blaze was burning on each side of the airport and it is unclear how long flights will be affected with several of them being diverted to Sydney.

A bushfire south of the airport was set to “emergency” level on Thursday.

Hundreds of passengers have been impacted by the fire, which blew heavy smoke across the runway.

Videos posted by onlookers showed strong winds ripping through the trees, thick blankets of smoke next to the airport and water bombers closing in on the fire.

Residents in the Canberra suburbs of Beard, Oaks Estate as well Queanbeyan’s Crestwood have been told it’s too late to leave and they should seek shelter.

The blaze started on Wednesday but strong winds and high temperatures have seen conditions in Canberra deteriorate.

A second fire near the airport that started on Thursday morning is at “watch and act” level.

Nearby residents were told to get their bushfire plans ready as authorities warned conditions could get worse.

Firefighters were also responding to burning trees in the southern Canberra suburb of Monash.

A large fire near Adaminaby, south of the ACT, was at “emergency” level while the Clyde Mountain fire on the NSW south coast had been upgraded to “watch and act”.

A return of hot and windy conditions resulted in seven bushfires being elevated to emergency warning level across NSW and the ACT on Thursday afternoon as temperatures soared into the 40s.

The fire at Box Hill in Sydney’s north-west was downgraded to “watch and act” after 1pm.

Blazes at Clyde Mountain and Badja Forest on the south coast, Adaminaby in the Snowy Mountains and Big Jack Mountain and Glen Allen in the Bega Valley area remain at emergency level along with another fire burning near Canberra Airport.

Although fire grounds across the state have received rain in the past week, hot temperatures and high winds on Thursday led to an increase in fire activity.

Temperatures reached 42 degrees in western Sydney at Penrith and Richmond and further inland at Coonamble and Bourke.

Seven NSW fire regions stretching from the Queensland border to the Victoria border are under total fire bans including greater Sydney. All seven regions were deemed to have a “severe” or “extreme” bushfire risk.

There were 84 fires burning across NSW with 40 yet to be contained at 3pm.

“Today will be a return to the bad old days we’ve seen over the course of the past few months,” NSW Emergency Services Minister David Elliott said on Thursday morning.

“Our appeal, of course, is for people to ensure they remain vigilant.”

RFS Commissioner Shane Fitzsimmons said conditions on the ground had improved over the past week due to rainfall but not all fire-affected communities had enjoyed a drenching.

The commissioner predicted fires on Sydney’s perimeter – including the large Gospers Mountain and Green Wattle Creek fires – had the potential to deteriorate again.

The unprecedented blazes in NSW have killed 21 people this fire season and razed more than 2000 homes.