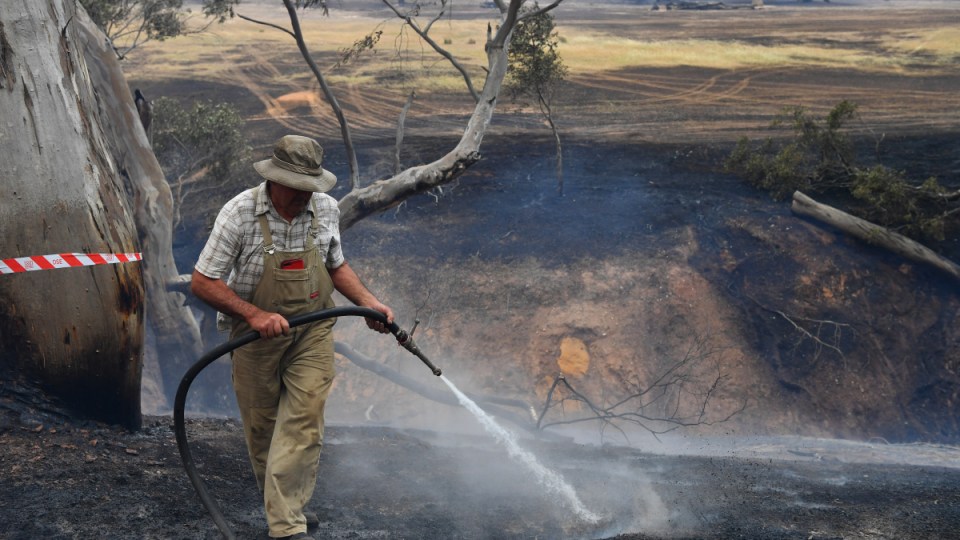 Victoria Police are investigating the cause of a grassfire in the north of the state as more than 60 fires burning across Victoria have been brought under control after a day marked by record-breaking temperatures and 100km/h winds.

The fire edged close to homes in Strathallan, south of Echuca, on Thursday forcing at least six families to evacuate.

Local fire crews were able to stop its spread and on Friday morning it was downgraded to an advice warning.

All of the fire danger areas have been downgraded from Thursday’s ‘code red’ to low-moderate across the southern regions and to high in the northern districts, heading into Friday after cooler weather prevailed.

A total fire ban across Victoria has also been lifted.

It’s a welcome relief for firefighters after a tension-filled Thursday but the government has warned the early start to the fire season in the state doesn’t bode well for the rest of the Spring-Summer period.

“This shows us what the risks will be in summer around Victoria, so we still have a long way to go to be ready.”

On Thursday, Melbourne broke a 100-year-old temperature record for November when the mercury hit 40.9 degrees and temperatures tipped well into the 40s in the Mallee and northern country region.

But cooler southerly winds swept through later on Thursday, dropping the temperature by more than 10 degrees in less than 30 minutes.

And more than 80,000 customers were left without power in the western part of the state, with Geelong, Bendigo and Ballarat hardest hit, service provider Powercor said.

On Friday morning, about 13,000 homes were still without power including the outer eastern suburbs of Melbourne including Lilydale and Chirnside Park.

Crews responded to more than 22 fallen powerlines, and 130-plus separate faults across the state which were impacted by the extreme winds.

The weather is forecast to be milder over the weekend with an expected 22 degrees on Saturday.

Melbourne has just equalled its November temperature record of 40.9 degrees. The last time it hit that was in 1894! @abcmelbourne

The fire danger rating for Friday has been downgraded to high in the northern districts of the state, and low all across the southern regions.

“Given fires could start and move quickly, you won’t always receive a warning or be told what to do if a fire starts,” he said.

Almost 60 bushfires are still burning across NSW with widespread very high fire danger set to continue across the state.

Twenty-nine of the 59 bushfires still burning are yet to be contained, with just one fire on Myall Creek Road in northern NSW, classed as a watch and act on Thursday night.

Sydney and much of the NSW coast was blanketed in smoke on Thursday and while it may diminish on Friday it’s likely to return over the weekend, the RFS tweeted.

While there are no total fire bans in place for Friday, the NSW RFS tweeted a warning that warm weather is set to continue.

No total fire bans in NSW today, however there is widespread very high fire danger for areas in the north and through central NSW. Firefighters today will use favourable conditions to work on strengthening and consilidating containment lines. #nswrfs #nswfires pic.twitter.com/O001KRXUZC

In Queensland, temperatures finally cooled and brought a moment of reprieve, although a massive blaze is still burning in Queensland’s Darling Downs and is still major concern to authorities.

The fire, between Pechey, Ravensbourne, Esk and Crows Nest continues across a 100km firefront.

It has officials concerned and roads closed there remained cut off on Thursday so burnt out trees could be cut down.

Another blaze is simmering in the Border Rangers, including Mount Barney, Mount Lindesay and Cunninghams Gap, and another on Moreton Island.

But firefighters have used the cooler conditions to back burn and get a stronger hold.

In the past fortnight NSW lost 503 homes and 20 burned in Queensland.

At least 11 properties have been damaged or destroyed, including homes and sheds, and 33 people have been treated for minor injuries including smoke inhalation.

Premier Steven Marshall is expected to tour the fire ground on Friday.

A major blaze on the Yorke Peninsula broke out during catastrophic fire danger conditions on Wednesday afternoon, and burned uncontrolled in stubble towards the coastal towns of Edithburgh and Coobowie.

The now-contained fire burnt through about 5000 hectares over an area with a 61-kilometre perimeter, wiping out “a high number” of stock and crops.

“This afternoon, the government approved access to emergency relief grants, which will provide immediate funding for essentials, such as toiletries, food, medication and clothing,” she said on Thursday.

“The immediate, emergency relief will be provided to people who have had to evacuate their homes and for those who cannot yet return home because roads remain blocked.”

The grants will provide up to $700 per family or $280 per individual adult, and can be applied for at the relief centre at Stansbury.