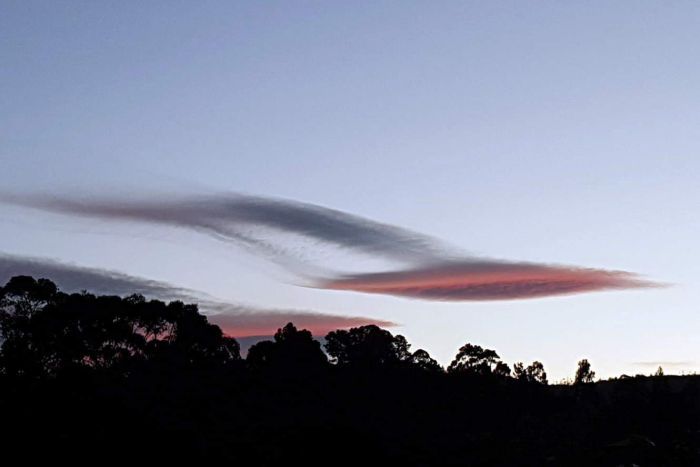 It’s not just the dancing lights of the Aurora Australis or the vibrant blue algae of bioluminescence that wow shutterbugs in Australia’s southernmost state.

There is also no shortage of unusual cloud formations to snap and share online.

Snaps of sphere-shaped clouds lit up social media this week, with users capturing a spectacular display of “alien space ships” spotted across Tasmania.

They were not visitors from outer space, but a phenomenon known as lenticular clouds.

Lenticular clouds form when winds travel over mountain ranges and form waves and, when the wind cools, they appear to stand alone in the sky.

The Bureau of Meteorology said the cloud formations “certainly put on a show”.

“You do get weird shapes sometimes and staying in one place,” meteorologist Michael Conway said.

Mr Conway said the way the clouds form all comes down to the air.

“If there is a slight difference in speed or humidity of the air, it will cause differences in the clouds that form,” he said.

He said this week’s formations were an impressive example of the phenomenon.

“It was quite the show. A speccy day for cloud watchers that’s for sure,” he said.

On ABC Hobart’s Facebook page users shared their own snaps of the unique clouds.

“My kids always referred to them as alien space ship-cloaking devices,” Yvonne Kerklaan said, adding to the public opinion that the clouds resembled UFOs.

“The clouds in Tassie always have me mesmerised,” Cheryl Wilkins said.

How common are they?

Tasmania is a bit of a hotspot for lenticular clouds because of frequent westerly winds.

They are also common in other locations surrounded by mountain ranges, such as the Andes in South America.

“We are definitely one of the top locations in the world to spot them, especially in the east of the state,” Mr Conway said.

“Anywhere downstream of a mountain range will get that flow that causes lenticular clouds.”

Lenticular clouds don’t just look spectacular, they also come bearing an important message for meteorologists to pass on to pilots.

“They are great predictors of turbulence for small aircraft, which can get buffeted by them,” Mr Conway said.

“If we see a lenticular cloud, we know to get the warnings out.”