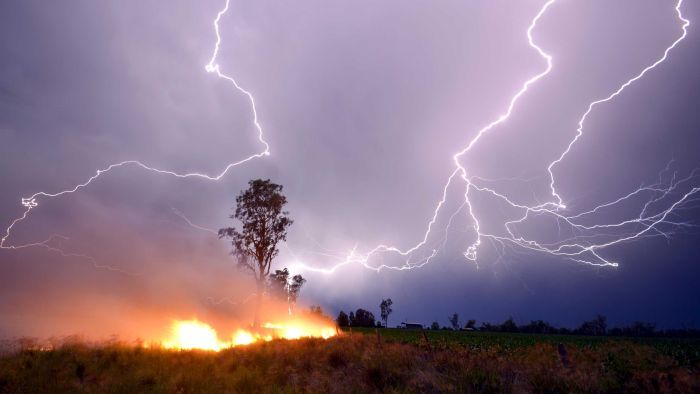 Victorians are warned of a high risk of thunderstorm asthma conditions on Friday.

Thunderstorm asthma alerts were issued for broad swathes of Victoria on Friday ahead of a gusty cool change that will increase the risk of the potentially deadly syndrome that killed 10 people in 2016.

Residents of the Wimmera, in far western Victoria, faced the highest risks, with a high pollen forecast and severe thunderstorms expected as a gusty cool change sweeps away two days of scorching temperatures.

There is also a moderate risk of similar conditions in central Victoria – including Melbourne – and for the Mallee and the state’s south-west and northern regions.

Late on Friday afternoon, Victorian health authorities said there had been high winds in the areas forecast to have the highest risk, and the storm was expected to reach Melbourne later in the night.

“Anyone who has asthma, anyone who has hayfever, and especially those who have both … are at particular risk of thunderstorm asthma,” Victoria’s chief health officer Dr Brett Sutton said on 3AW Radio on Friday morning.

Thunderstorm forecast for FRIDAY. Severe thunderstorms are likely from early afternoon with and ahead of a trough in the southwest of the State, with damaging winds and heavy rainfall possible. Storms won't reach #Melbourne until close to midnight. https://t.co/MiPY9SnOlS pic.twitter.com/6qHrKzPCGu

Dr Sutton said anyone who was at risk should manage their symptoms for asthma and hayfever, carry reliever medication or stay indoors.

If someone was suffering an asthma attack they should be made to sit upright and use four puffs of their reliever medication, Dr Sutton said.

Ten people died during or soon after a thunderstorm asthma event in Melbourne on November 21, 2016, which brought such an unprecedented surge in demand for ambulances that the city’s hospitals could not cope.

The low-pressure trough and cold front that has prompted the thunderstorm asthma warning will sweep away days of heat and bring widespread rain and storms as it passes across south-eastern Australia between Friday and Tuesday.

Forecaster Weatherzone said the system was likely to bring falls of up to 20 millimetres in and around the Murray-Darling Basin. Some areas, particularly those that get thunderstorms, might get more than 50 millimetres.

However, NSW residents will have endure another day of smoky skies and poor air quality before the cold front brings welcome rain and a change of wind direction – and clearer air.

Seventy fires were burning across NSW on Thursday night, 44 of them were uncontained. Most of the state faces high to very high fire conditions on Friday.

Fires burning on the NSW mid-north coast, which are believed to have killed at least 350 koalas, have sent haze south to Sydney and as far as Bowral.

The haze has led the NSW Department of Environment to warn that air quality in Sydney would again be “poor” on Friday.

People with chronic respiratory or heart conditions were encouraged to stay indoors.

On Thursday, the air quality in parts of the lower Hunter, upper Hunter, Central Coast, Sydney and Illawarra were rated “hazardous”.

The weather bureau said the smoky conditions were likely to continue until late Sunday or early Monday as winds from the north and north-east push smoke from the bushfire at Port Macquarie south.

There is a total fire ban across NSW on Friday.

Several bush shacks were under threat from the fire in rough terrain near Black Snake Creek west of Lake Crescent.

On Thursday night, it was one of nearly 20 active fires across Tasmania.

The risk was expected to continue into Friday, with strong winds and temperatures are again tipped to peak in the 30s.

There is a total fire ban in place for southern Tasmania on Friday, before a cold front and rain are tipped at the weekend.

Thunderstorm asthma, smoke and fire threats on day of danger