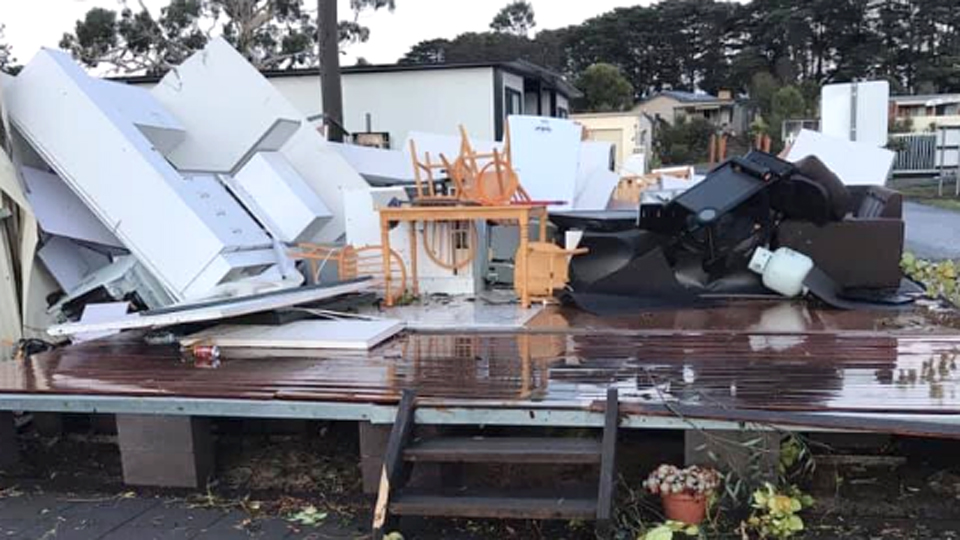 More extreme weather is expected to hit parts of Victoria on Thursday following reports of a mini tornado ripping through the south-west of the state.

The Bureau of Meteorology issued a weather warning for damaging winds, heavy rainfall and flash flooding on Thursday morning, urging residents in affected areas to take precautions against the severe events.

The state’s north-east and most parts of the Gippsland forecast districts are expected to bear the brunt of the storm, which is being driven by a complex low pressure system to the south-west of Victoria.

In the Alpine region, gusts had already topped 110km/h on Thursday morning, with the winds expected to ease as the day progresses.

Meanwhile, heavy rainfall totals could cause flash flooding through the north-east district on Thursday night.

Totals in the region of 50 to 80 millimetres are forecast, with some areas flagged to receive between 100 and 150 millimetres.

Residents in the region are being urged to prepare before the heaviest rainfall period, which at noon the bureau had forecast to be between 8pm and 5am on Friday.

Towns that should be on high alert include Wodonga, Wangaratta, Corryong, Bright, Falls Creek and Omeo.

The warnings follow a wild weather event overnight in which roofs were torn off buildings and thrown up to half a kilometre away as a storm left a trail of damage from Camperdown to Lake Purrumbete.

The Lake Purrumbete Caravan Park bore the brunt of the weather event described by some as a mini tornado.

Part of the major damage sustained at the Purrumbete Holiday Park near Camperdown by a possible tornado. Photo thanks to Wendy Gerring. This is what remains of the cabin she shared with her Daughter @abcmelbourne @3AW693 @JaneBunn @MikeLarkan @StormHour pic.twitter.com/nMSC4EL0yT

Camperdown SES controller Colin Brian said SES volunteers had to cut their way through half a dozen trees that had fallen onto roads to get to the park.

“We worked our way through that and found a horrific scene. It’s something I’ve never seen before,” Mr Brian said.

“There were cabin [roofs] blown away, boats in the middle of the road, trees down everywhere.

“Hundreds of metres, half a kilometre some of the stuff was blown. It was just bedlam, it’s hard to describe.

“I haven’t seen anything like that in my time at the SES. [The caravan park] is just gone.”

The State Emergency Service advises that people should:

Rains overnight from Wednesday to Thursday were welcomed by parts of the state that have been suffering through a drier-than-average season.

Western Victoria received the brunt of a forecast thunderstorm overnight, with Stawell recording almost 70 millimetres in less than 12 hours, the town’s highest daily rainfall ever.