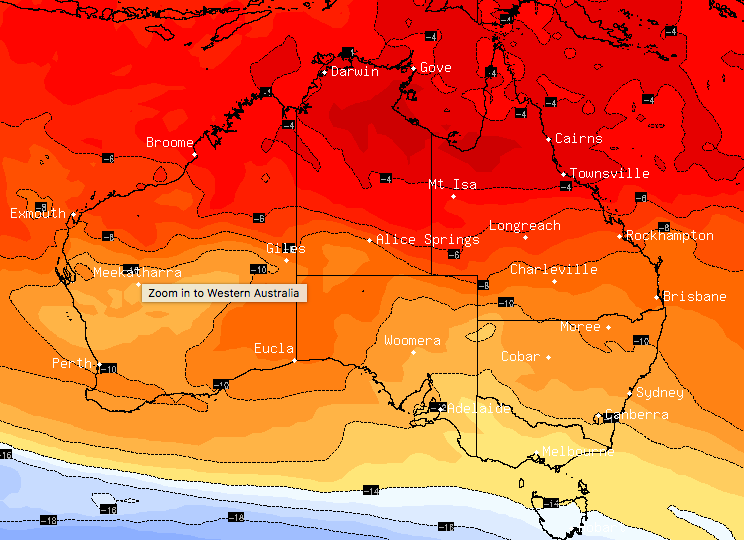 The forecast for Christmas Day? Hot, for just about everywhere in Australia. Photo: Stormcast.com.au

It will be a sweltering Christmas Day for many Australians, with swathes of the country sweating under sunny skies and temperatures well into the 40s.

South Australia will bear much of the brunt of the Christmas heatwave as the state enjoys its first sustained period of hot weather this summer.

In inland SA, Coober Pedy residents are preparing for six days of 40 degree-plus weather, for of those tipped to hit 46 degrees.

Centres such as Marree and Oodnadatta will also be hot, expecting maximums of 42 degrees.

Adelaide is forecast to have a top of 35 degrees on Christmas Day. The temperature will rise to 41 degrees by Thursday, with 41 degrees also forecast for next Sunday.

Over the border, Victoria will also be warm, with Mildura expecting maximums ranging from 36 to 46 degrees.

It will be a bit more bearable in Victoria’s south. The Bureau of Meteorology predicts a sunny 26 degrees for Christmas Day, with up to 30 degrees in other parts of the state.

Senior forecaster Beren Bradshaw said there would be light winds across Victoria on Tuesday. It will be breezier in coastal areas.

Perfect conditions are forecast for Wednesday for first day of the Boxing Day Test.

“We can expect some morning cloud and a sunny afternoon with some light winds and a top of 26 degrees,” Ms Bradshaw said.

#Heatwave conditions expected with highest temperatures expected next weekend. Temperatures along the Murray likely to be in the mid 40's. See https://t.co/ijl11onM2A pic.twitter.com/Y9u7QQE16h

Sydney has a similar forecast for Christmas week, from 26 degrees on Tuesday to a high of 34 on Sunday. It will be sweatier in western NSW, however, with Broken Hill set for two days at 35 and 38 degrees before four days in the 40s.

Sydneysiders who have endured a week of thunderstorms and hail might be relieved to hear there is no storm weather forecast for coming days.

At Dubbo, Tuesday will hit 33 degrees and the week will warm up from there. Sunday is forecast to be 41 degrees.

Queensland’s weather forecasters are also promising a cool reprieve for the state’s south-east on Christmas Day.

In Brisbane, Christmas temperatures are predicted to peak about 29 degrees after a scorching weekend with temperatures soaring to more than 35 degrees.

On the Gold Coast, maximums will range between 17-27 degrees. The Sunshine Coast can expect 18-27 degrees, with a partly cloudy sky and no chance of rain.

You may want to take extreme heat into consideration if you're planning a holiday in southern or southeastern Australia between Christmas and early January: https://t.co/wmA8QIqqiJ pic.twitter.com/BRRlHTgK5W

However, far north Queensland is bracing for a wet Christmas Day, with more than 100 millimetres of rain expected around Cairns.

“The catchments are still very wet and there is a potential for minor flooding,” he said.

Toowoomba and the Darling Downs will sit between 13-28 degrees, with no chance of rain.

In Queensland’s far west, there will be no chance of a Christmas reprieve from drought conditions. Temperatures around Mount Isa will hover around 40 degrees.

Over in the west, Perth will buck the national trend with a hot Christmas Day (35 degrees), followed by a week of days in the mid to high-20s.

Tasmania can also expect its hottest day of the week on Tuesday (about 30 degrees), with temperatures in the mid to low-20s in the days to follow. Parts of the state might even get some showers.

The forecast for Christmas is … sweltering