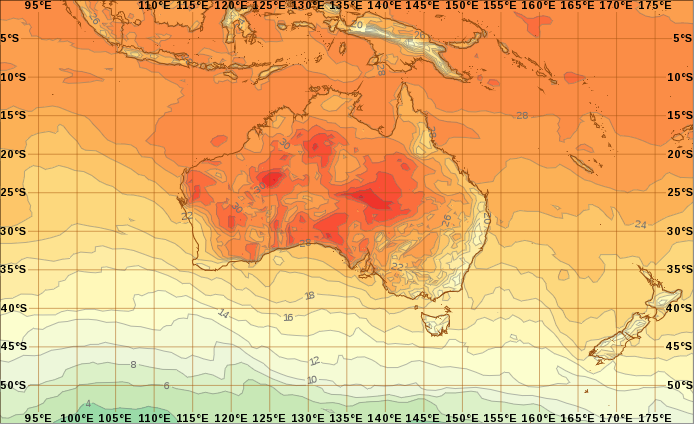 Parts of Australia are set to swelter through a heatwave over the next few days. Photo: BOM

South Australia’s State Emergency Service has warned people to stay inside and said blackouts are possible at peak times as air conditioners and fans create a drain on the power supply.

The extreme heat could pose a threat to players at the Australian Open and cricketers playing in the men’s and women’s Big Bash League at the Sydney Cricket Ground on Thursday.

Thursday’s third stage of the Tour Down Under cycling in South Australia was shortened by 26km and a public bike race cancelled, with the state’s Country Fire Service earmarking aerial bombers for the event.

Victoria is facing its most prolonged heatwave in three years with temperatures forecast in excess of 40C.

In NSW, temperatures are set to reach up to 42C in Western Sydney on Thursday, 45C in Hay on Saturday and 46C in Ivanhoe on Sunday.

Melbourne will see the mercury soar to 38C and 39C on Thursday and Friday, the Bureau of Meteorology said.

Total fire bans are in place for Thursday in the Mallee, Wimmera, South West, Central and North Central areas of Victoria.

The conditions could force the use of the extreme heat policy at the Australian Open.

This decision is up to the discretion of the tournament referee, but it is guided by a calculation called the wet bulb global temperature.

“Thursday we expect some very hot weather, about 40 degrees here at the park,” said Bob Leighton, the Open’s official forecaster.

“That’s about one degree hotter than the Melbourne forecast because at the park here there are a lot of buildings, a lot of concrete, a lot of asphalt and a lot of alleyways that tend to get hot.”

He predicts Friday will stay hot courtside, with temperatures reaching up to 41 degrees before a change at around four or five in the afternoon, when the temperature should drop to about 26 degrees.

South Australia is facing at least two days of temperatures in the 40s, with total fire bans imposed and an extreme heat emergency warning issued.

The mercury is tipped to reach 41 in Adelaide on Thursday and Friday.

Fire authorities said the danger level was rated as extreme for the Mount Lofty Ranges and Lower South East districts for Thursday.

Country Fire Service duty commander Phil McDonough said he was mindful of spectators and competitors involved with the Tour Down Under.

“The CFS has staff in the Tour Down Under operations centre to inform organisers of any fire threat, however we also need those spectators along the route to stay alert by taking notice of surroundings,” he said.

The Bureau of Meteorology has warned of extremely hot conditions across much of NSW over the next few days.

NSW’s Rural Fire Service has declared a severe fire danger warning for Sydney, the central ranges, northwestern NSW, the Illawarra, the Hunter and the southern and northern slopes on Thursday.

“I urge landholders, homeowners, businesses and holidaymakers to consider how they will be impacted and begin making their preparations today,” NSW RFS commissioner Shane Fitzsimmons said in a statement.