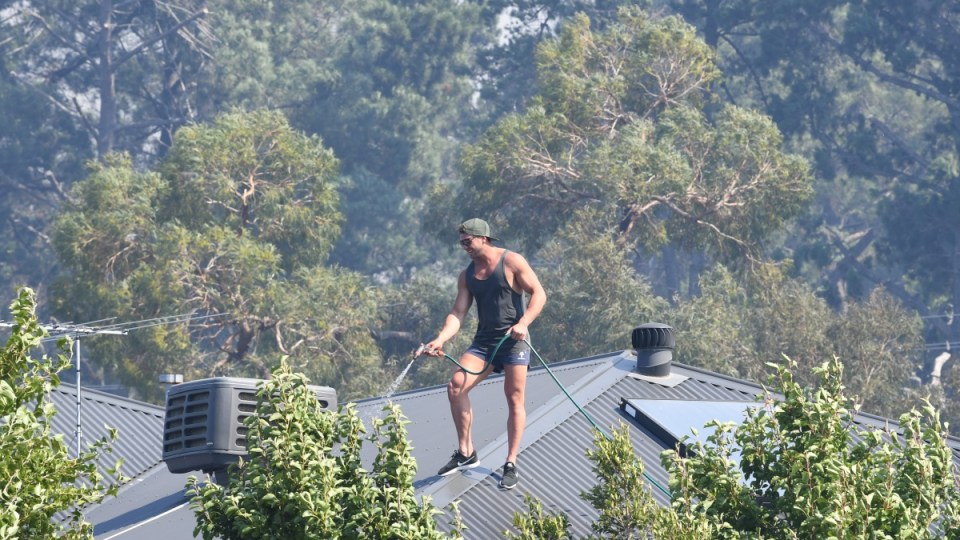 A man hoses down his roof in Carrum Downs, Victoria, where an out-of-control fire raged on Saturday afternoon. Photo: AAP

Australians in the southern part of the country breathed a sigh of relief as the temperature dropped about 15 degrees in just a couple of hours in Melbourne after sweltering temperatures and out of control fires on Saturday.

Firefighters battled 50 fires across Victoria, including a fire in Glenormiston in the state’s west and an out-of control fire in Carrum Downs, near Frankston, that burned the roof on at least one house and damaged other homes and vehicles.

Police have charged a teenage girl with lighting the Carrum Downs fire.

High winds also fuelled a fire in Sherwood in South Australia‘s upper south east and another blaze near the of McLaren Vale wine country.

Early on Sunday morning South Australia’s Country Fire Service said the progress of the Sherwood fire had slowed, with emergency warnings for locals replaced with a watch and act message.

“Firefighters are still working to contain the fire, however, fire intensity and rate of spread has moderated,” the CFS said.

It said farm buildings and other assets could still be at risk and anyone who had left the area should not yet return.

Earlier, a fire crew survived a frightening burnover in their truck as the fire raged, destroying two farm buildings and threatening homes in South Australia’s southeast.

The crew was among more than 70 firefighters who battled the blaze which also posed a threat to properties at Brimbago, Lowan Vale, McCallum and Senior near the South Australian-Victorian border.

By late on Saturday the blaze had destroyed more than 8000 hectares of scrub and farmland.

At one stage local farmer Robyn Verrall reported a “wall of flames” as the fire burned out of control. Images she posted on Twitter showed trees and grass on fire while a video showed thick smoke blanketing paddocks, significantly reducing visibility.

The southeast blaze was also among about 40 incidents requiring CFS attention, including other fires at Happy Valley, Penfield and one at a rubbish dump at McLaren Vale where equipment valued at $1.5 million was lost.

Ms Legge said Adelaide received the cool change on Saturday afternoon, while Melbourne dropped 22 degrees as the southerly gusted in.

The temperature hovered around the 20s and high teens through Saturday evening and into early Sunday morning.

Melbourne reached a top of 42 degrees and Adelaide hit 41 degrees on Saturday, while Sydney registered 30 degrees’ with further heat expected on Sunday and an anticipated maximum temperature of 38 degrees.

The suburb of Penrith, west of Sydney, is expected to reach 45 degrees on Sunday.

“There’s a hot air mass over the south parts of Victoria, but the western parts of New South Wales will bear the brunt of the heat tomorrow,” Ms Legge said on Saturday.

The meteorologist said Hobart would also be “quite hot” on Sunday by seasonal standards, forecasting much of Tasmania to reach the mid 30s tomorrow.

“Although it’s pretty normal to have one or two days above 40 degrees in January, Melbourne didn’t reach 40 degrees last summer,” Ms Legge said.

“This is the first time in almost two years that it will reach 40 degrees,” she said on Saturday afternoon.

The Bureau of Meteorology also issued a fire weather warning across south Australia and western-central parts of Victoria, with severe, damaging winds of up to 90 kilometres per hour.

Authorities in South Australia urged people to prepare their bushfire survival plans with conditions predicted to be the worst since the Pinery fire in 2015 that claimed two lives.

“These gusty winds are behind the change, so if the wind changes direction, any fires around will be much harder to control and change the fire front direction,” Ms Legge said.

More than 3000 homes in Victoria lost power as the mercury soared on Saturday, including Caroline Springs, North Warrandyte, Warrandyte, Kangaroo Ground and Beaconsfield.

In Melbourne, residents joked things had gotten dire when a local Bunnings Warehouse called off its weekend sausage sizzle due to the extreme heat.