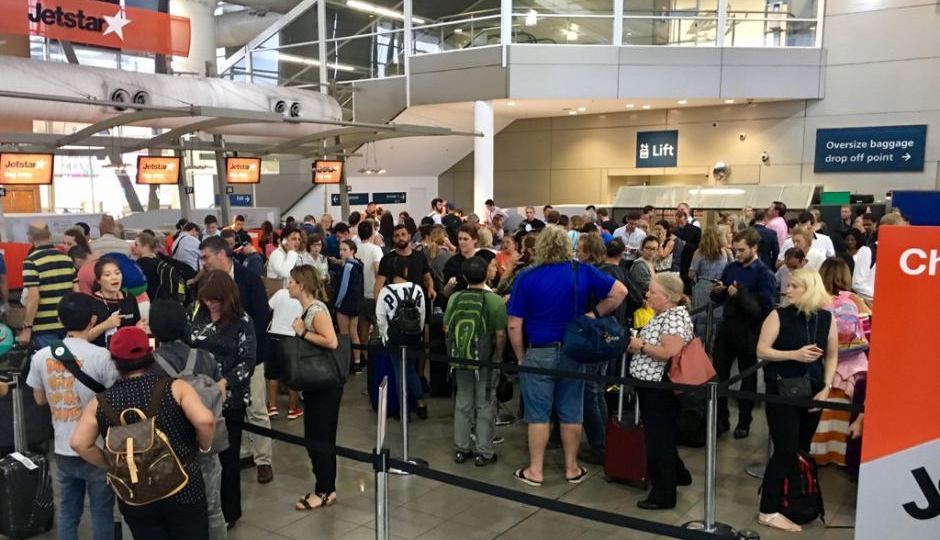 Long queues have formed at Sydney Airport with several flights cancelled due to the storm. Photo: ABC

Tens of thousands of homes and businesses are without power in Sydney’s west, as a severe thunderstorm is bringing heavy rainfall and damaging winds.

The storm is affecting areas to the south-west of Penrith and the BoM has warned the storm is tracking to the north-east to the Gosford/Wyong area.

Becky Gollings from the State Emergency Service (SES) said they had responded to hundreds of calls for help since the storm warning was issued, most of them in Mt Druitt, and the number was rising.

“It was pretty chaotic with those severe thunderstorms affecting Sydney and further south on the Illawarra and south coast,” she said.

“We’re [attending] over 500 callouts and that number is rapidly rising as more people come home and discover damage to their properties, and we’re seeing things like trees down on cars and homes and powerlines down across roads.”

Areas affected include Penrith, Mt Druitt and The Hills, with heavy rain and strong winds bringing trees down on homes and roads.

Endeavour Energy said more than 30,000 homes and businesses in Western Sydney suburbs from St Marys through to Mt Druitt and the Hills District have been left without power.

More than 15,000 of those were in the Plumpton area, after a lightning strike hit a major substation.

Sydney Airport said several flights have been cancelled and both domestic and international services were experiencing delays, and it advised passengers to check with their airlines.

Forecaster Zac Porter said the storm produced some fairly heavy rainfall as it came into the Sydney area.

“Around the Warragamba Dam area we have had falls of up to 20 millimetres in just 15 minutes and also in other parts of the state today with thunderstorm activity we have seen winds gusts of over 80 kilometres per hour,” he said.

“The suburbs that we’re most concerned about would be Penrith and heading into Blacktown as the afternoon wears on and depending on the future track of the storm we could see it possibly coming out into the Northern Beaches later into the afternoon.”

Earlier in the afternoon, Cowra, in the state’s central west, recorded wind gusts of 87kph and a gust of 85kph was recorded at Goulburn in the Southern Tablelands.

Earlier in the afternoon, Cowra, in the state’s central west, recorded wind gusts of 87kph and a gust of 85kph was recorded at Goulburn in the Southern Tablelands.