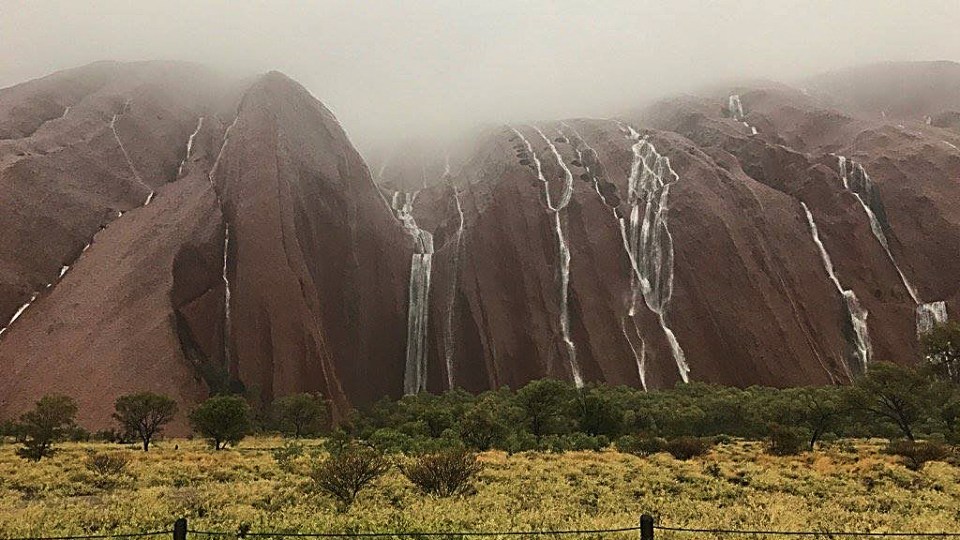 Uluru has reopened after it was closed by flash flooding on Boxing Day. Photo: Facebook/Parks Australia.

A massive Christmas night storm and heavy rain that has sparked damaging flash floods in central Australia is being described as a once-in-a-half-century weather event by the Bureau of Meteorology (BoM).

A quarter of the community of Kintore was evacuated after it was drenched by 232mm of rain in the 24 hours since 9am on Sunday — taking the December total to a record 373.4mm.

About 61mm fell from 8pm to 9pm on Christmas night alone, which BoM labelled a one-in-50-year rainfall event.

Northern Territory police said it had caused significant flash flooding woes for the 400 people living in Kintore, which is located about 520km west of Alice Springs near the Western Australia border.

“There’s a significant number of houses that have been affected by flooding in some capacity,” said Acting Superintendent Pauline Vicary.

She said 20 to 25 homes were flooded, fences on other properties were damaged and cars were submerged.

“We’re estimating about 40 per cent of the houses in Kintore have had some sort of damage as a result of the flooding,” she said.

Ninety-six people were taken to an emergency evacuation point at the local school — 85 are still sheltering there but others found accommodation with family and friends.

“It is a remote area and it’s quite tricky, all the roads are impassable from the NT side into Kintore at the moment, and the WA access is also significantly impaired and it’s quite dangerous to get though, so it’s obviously going to impair us getting resources in there.”

Low cloud cover meant the police plane has not been able to fly in to the stranded community.

But Acting Superintendent Vicary said the community had a good emergency plan, plenty of food and medical supplies, and the clinic was not affected.

Police feared a carload of people travelling from WA to Kintore may be stranded by floodwaters.

Acting Superintendent Vicary said Papunya community, about 250km west of Alice Springs, was also “completely isolated, roads are impassable”, but there were no reports of flooding.

Rangers closed the park around 9:00am due to the risk of flooded roads and the potential for car accidents, said park manager Mike Misso.

“There’s a lot of water … coming off the rock and what that does is just channels across the ring road around Uluru, some of those roads there were flooded by about 300mm to 400mm of rain. [It is] quite spectacular but very hazardous road conditions,” he said.

The situation is being assessed every two hours to determine whether it is safe to reopen, “but there’s a lot of rain and a lot of water on the roads”, Mr Misso warned.

The town square of Yulara, the community closest to Uluru, was inundated and firemen are pumping the water out.

Some flights were cancelled.

“They might get close to this in the next four days alone!” It said on Twitter on Monday.

The Bureau advised that a deep low pressure system was moving slowly south-eastwards across the far southwest of the Northern Territory, with locally destructive winds bearing peak gusts up to 125km/h possible in the eastern Lasseter District.

Heavy rain which may lead to flash flooding is expected in the eastern Lasseter, southern Tanami and western Simpson Districts.

BOM said the Yulara and Kulgera communities may be affected, along with Alice Springs, Yuendumu, Wulungurru and Kaltukatjara.