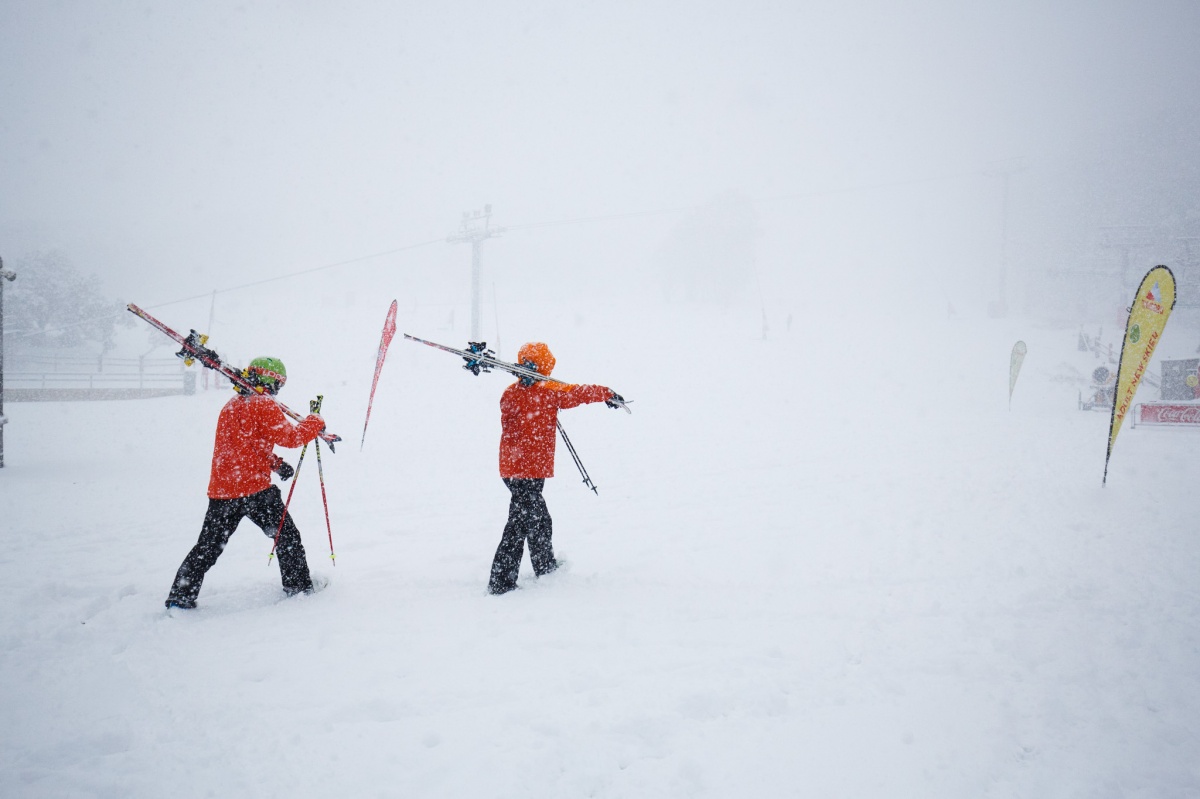 Snow could fall on Melbourne’s outskirts and in parts of New South Wales as a bitter cold front pushes across the country, plunging the mercury towards freezing point.

Temperatures in Melbourne are not expected to get above 13 degrees until Tuesday, while similar conditions are predicted for Hobart and Adelaide.

The thermometer struggled to make it past 10 degrees in Melbourne on Friday, with Mount Macedon, Kinglake and the Dandenongs predicted to receive heavy snow over the weekend.

Sydneysiders on their Saturday morning beach walk will need to wear more than just slinky leggings and crop tops, with the temperature starting the day at 7 degrees.

In New South Wales on Friday there were widespread reports of snowfalls in the state’s alpine areas, with light falls in the Blue Mountains and parts of the Central West.

Katoomba resident Bretton Drinkwater said several centimetres of snow had fallen in the town and it was quite a sight.

“We’d have already 2-3 centimetres of snow. It’s a real winter wonderland at the present time.”

Melbourne, meanwhile, will wake up on Saturday to 5 degrees, while brave Tasmanians will battle  minus 3 degrees in Launceston and 2 degrees in Hobart.

Canberra is set for a freezing but mostly sunny weekend, with a low temperature of minus 3 degrees predicted on Sunday.

Bureau of Meteorology (BoM) forecaster Keris Arndt said Victoria’s snow level had been hovering about 1400 metres this week, but that could drop to 500 metres.

Conditions over the weekend were expected to be cold and dry, he said.

Ski resorts in NSW and Victoria have enjoyed a week of steady snowfalls.

“It’s getting deeper out there 30cm plus with 20-40cm forecast in the next 36hrs,” Falls Creek resort wrote on Facebook.

Meanwhile Thredbo resort wrote: “We are expecting heavy snowfall tonight and into tomorrow.”

Weatherzone warned New South Wales residents in snowy areas to look out for dangerous black ice on the roads.

“Dangerous snow flurries and black ice are expected to cause major hazards for motorists as a cold snap moves through New South Wales,” it said.

A warning for possible traffic disruptions, especially on the Great Western Highway, was issued by the State Emergency Service.

Erskine Falls, on the surf coast, is blanketed in white, while the Victorian Alps has had 20-25 centimetres of snow in the last 24 hours.

Although the cold snap was predicted to ease over the weekend, snow is expected to keep falling, making for happy ski bunnies.

Sydney, Brisbane and Perth were tipped for temperatures in the mid to high teens.

The top end will remain warm, with Darwin staying in the low 30s.

Why is Victoria cold? It’s winter.

“This is just the first burst of cold air for the winter,” says Ted Williams, the Bureau of Meteorology’s Victorian weather services manager.

Despite its regularity, usually three months from June to September, it seems to catch the public and media by surprise each year, he added wryly.

Is this the start of cold things to come, Mr Williams is asked.

But isn’t this winter colder than usual?

“So far this winter is no colder than previous winters,” Mr Williams said.

Remember before I moved to Melbourne when I vowed never to tweet about Melbourne weather lol what a naive idiot.

Get used to the cold weather … it’s here to stay