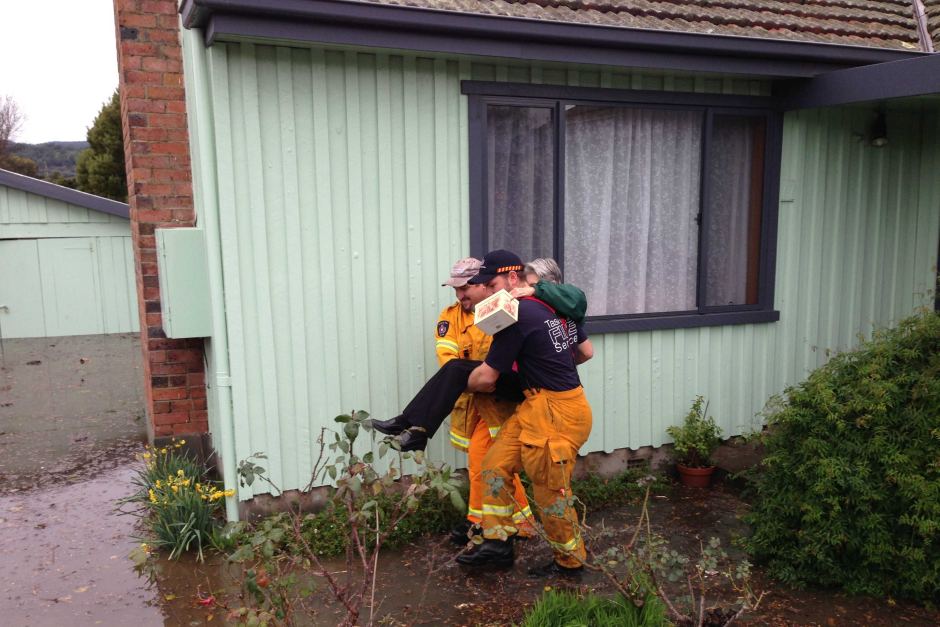 There are grave fears for two elderly people missing in Tasmania amid widespread flooding.

Police and locals are searching for a man in his 80s who disappeared at the Cluny’s Road area at Ouse, in the upper Derwent Valley.

His wife raised the alarm after he went to check part of their property. She said he had been swept away by floodwaters.

Police have sent a specialist search and rescue team to the area along with a helicopter.

Floodwaters are not expected to peak in the area until Monday evening.

He told Country Hour he had been told even more water would wash down in the next 10 hours.

“We’ve been watching hoggets washing down the river,” he said.

“[We have] probably lost quite a few hundred hoggets because we weren’t expecting anything like this to come charging down the Ouse river.”

In Latrobe in the north-west an elderly man was rescued on Monday morning through the roof of his flooded home but his wife is still missing.

Public health authorities warned people to avoid contact with flood water, which may be contaminated with sewage.

“Where possible people should avoid contact with floodwaters,” he said.

“If you do come into contact with floodwaters, wash your hands and change any contaminated clothing, particularly before preparing or eating food.”

Major flood warnings around the state

A flood watch is in place for all Tasmanian river basins after parts of the state received rainfall in excess of 200 millimetres.

Bureau of Meteorology forecaster John Bally said the unprecedented conditions meant some rivers would not subside for days.

“We’ve got four rivers, that’s the Mersey, the Meander, the Forth, and the North Esk that are at or forecast soon to be the highest flows that we’ve ever seen,” he said.

BoM said the rivers could remain high for another couple of days.

The Emu River in Burnie and the North Esk River in Launceston have both broken their banks.

Evacuation centres are currently open at Devonport, Wynyard and the Albert Hall in Launceston.

Residents in parts of the St Leonards area of Launceston, which borders the North Esk, have already been evacuated, and it is likely more people will be forced to leave later on Monday.

In Hart Street, Newstead, most residents were forced to evacuate.

Jan Kidd, who was among the evacuees, said she had lived in her house for 34 years and never seen anything like the floodwaters.

“Nothing like this ever. I’ve been on and on to the council over the years and they just laugh at you, they seem to think nothing needs to be done,” she said.

“When you get to this stage of your life and you feel like you’re losing everything, it’s not funny.”

The State Emergency Service said the North Esk River had exceeded levels seen in Launceston’s 1929 floods, during which 22 people were killed and 5000 were left homeless.

Emergency services have been doorknocking residents living on the banks of the North Esk urging them to get ready for the rivers to peak on Wednesday.

More than 100 roads are closed across the state, including parts of the Bass Highway.

More than 3200 homes are without power while TasNetworks staff rush to repair damaged power lines.

TasNetworks has advised people to keep well clear of any damaged power lines and report them immediately.

Army to help with building levees

Many residents of the north-west town of Latrobe have been evacuated overnight and on Monday morning after the Mersey River flooded.

A number of businesses and homes have been inundated.

Latrobe Mayor Peter Freshney said army personnel would be on the ground soon to help with sandbagging.

He said he was not confident everyone that needed help had received it yet.

“To be frank, we’re still working through that process – I’ve just been advised of a 95-year-old man who needs assistance to evacuate his home.

“I think we’ve got the majority of people but I can’t be certain that we’ve got everyone at this stage.”

There have been reports of cows submerged and floating at Horsehead Creek near Latrobe. The RSPCA were called but were unable to help.

Barry Rosham, a resident of Wivenhoe near Burnie, said he has seen houses and cars underwater since the Emu River broke its banks.

“All these houses below me was underwater and trucks, and the Cancer Council bus – you can just see the roof sticking out of the water,” he said.

“I’ve never seen anything like it they reckon there’s trucks down on the river road, totally underwater,” he said.