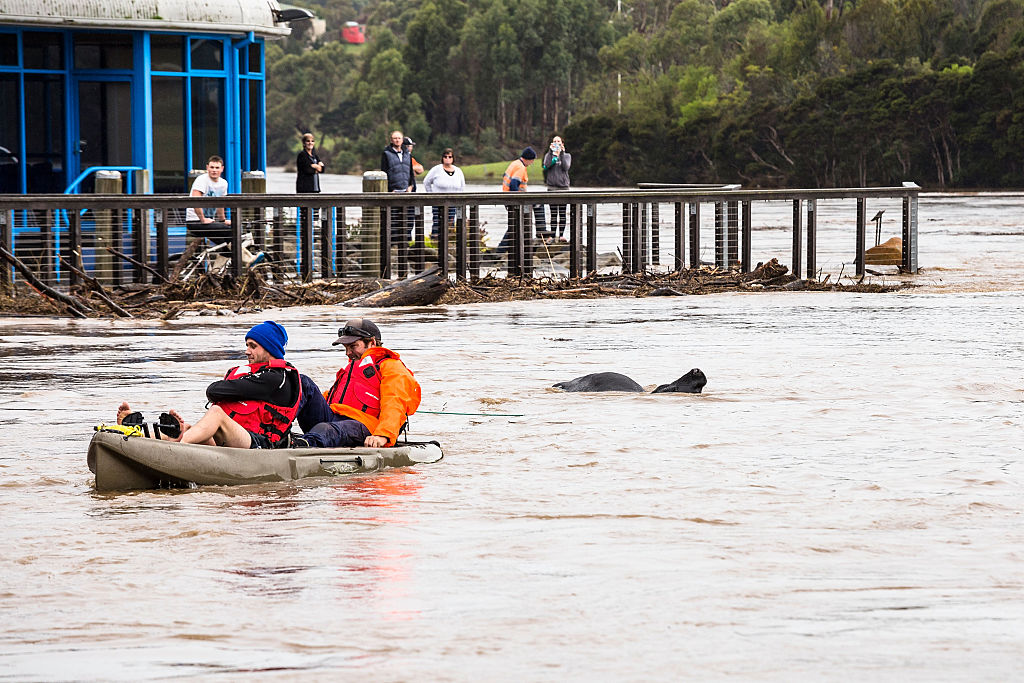 A flood watch is in place for all Tasmanian river basins.

Four people remain missing and three people are known to be dead, as the massive storm cell that devastated parts of the east coast causes record flooding in Tasmania.

Tasmania Police miraculously found one woman who was swept away by floodwaters. However, police will resume the search for her husband this morning.

Police this morning confirmed another two people are missing, and are searching the town of Evandale.

Conditions are said to be worse than Tasmania’s deadliest floods on record, in 1929, with flood warnings still in place for several rivers around the state.

The SES said it had attended to more than 270 calls for help, and dozens of people had been evacuated from their homes.

More than 100 homes have been inundated, mostly in Launceston and Latrobe, in the state’s north-west.

“The Forth and the Mersey [rivers] have peaked. They should start to fall over the next day or so, and then the clean-up [will] continue in earnest,” he said.

In the state’s south, the Ouse and Derwent rivers are still rising, with New Norfolk expected to be threatened this morning.

Mr Laczko urged residents near rivers expected to rise further to be vigilant.

There are currently two evacuation centres across the state, with the flooding expected to continue across the coming days.

Emergency services in NSW said it was too early to assess the damage after king tides peaked along the New South Wales east coast last night.

The Bureau of Meteorology said the low pressure system was losing strength as it moved off the coast, but a large swell and king tides would raise the risk of flooding, beach erosion and coastal inundation in all coastal areas south of Port Macquarie.

For central areas of the coast, the threat of erosion was unlikely to be as high as Sunday night’s event, as the wave heights would be lower, the bureau said.

Flood warnings remain in place for a number of rivers and evacuations are still current for Lismore in the state’s north and at Chipping Norton and Woronora in Sydney.

Stephanie Sullivan from the SES said there were also crews on standby at Collaroy in Sydney’s north, where king tides and swells on Sunday night caused significant beachside damage.

NSW Police have suspended the search for a man believed to be missing off Bondi Beach in Sydney’s east and will resume at first light this morning.

Emergency services were called to the southern end of the beach on Monday afternoon after receiving reports a man was in distress in the water.

“Witnesses have indicated a man was swept off the rocks just south of the Bondi icebergs,” Stephen Leahy, from the Westpac Lifesaver helicopter, said.

“He was in the water a very short period of time before he became submerged. He hasn’t been seen since.”

Earlier on Monday, NSW Police said divers retrieved two bodies from cars that were washed away in flood waters, while the body of another man was recovered from a swollen river in Canberra.

NSW Police Acting Assistant Commissioner Kyle Stewart said it was a tragedy to see deaths despite constant warnings about the dangers of entering flood waters.

“We simply do not know how either of these two men came to be in the floodwaters. But what we know is that their deaths show just how dangerous floodwaters are,” he said.