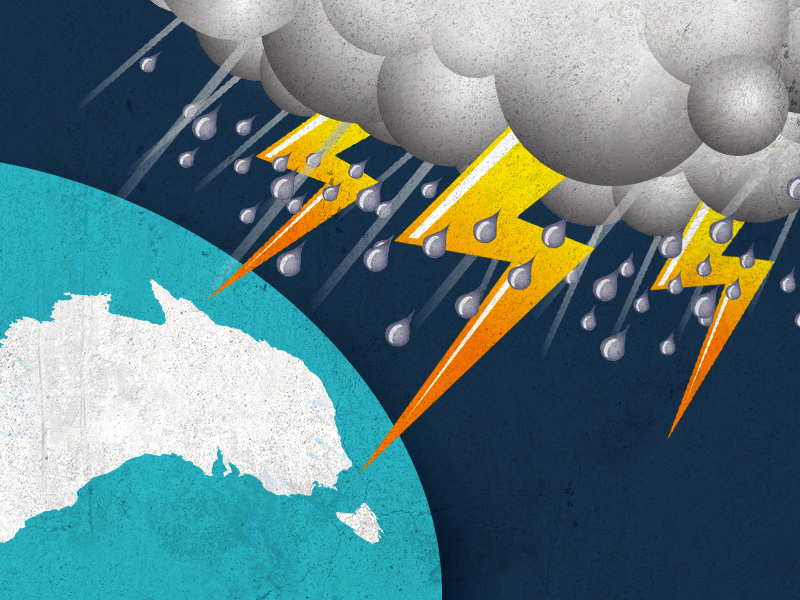 A spokesperson for the Bureau of Meteorology said the extreme weather pattern could “bring serious potential impacts” to the eastern states and advised those affected to stay indoors.

“This is a very widespread event with potentially serious impacts for communities as far north as Fraser Island and as far south as Hobart,” The Bureau’s National Operations Centre Director, Dr Andrew Tupper said.

“It will be a rough weekend for some communities with heavy rain, potential flooding, and damaging winds.”

Dr Tupper advised the public to keep up to date with weather warnings for their areas and not to “drive, ride or walk through flood water”.

The Bureau said southeast Queensland and northern New South Wales would be first to receive a deluge of rainfall caused by a developing East Coast Low.

Queenslanders should ready themselves for a deluge, with up to 250 millimetres of rain potentially pummelling parts of the state.

The worst of the weather is predicted to arrive on Saturday afternoon.

“The system will likely impact the entire NSW coast and adjacent ranges over the weekend, with widespread heavy rain and high winds that have the potential to cause riverine and flash flooding, bring trees down and cause property damage,” she said.

Click here to check the weather at your place

Ms Golding said the worst of the NSW weather was expected to be focused over the northern half of the coast and ranges on Saturday, with the southern half copping it on Sunday.

A severe weather warning has been issued for rain, wind and waves, while a flood watch was issued for eastern rivers.

“People can prevent damage to their homes by cleaning their gutters and downpipes, trimming overhanging branches and securing or putting away any loose items around the yard or balcony,” Acting Commissioner Newton said.

Acting State Emergency Service operations controller Geoff Mckechnie urged anyone planning on going out in the water to reconsider and take greater care on the roads.

Heavy rain, strong northeast winds and damaging surf conditions were all predicted for northern and eastern Tasmania on Sunday and Monday.

“Falls in the range of 40 to 80 mm are likely for the remainder of the north and east, with further significant rainfall expected on Monday,” the BoM’s Regional Director Tasmania John Bally said.

While the southern part of the mainland will miss out on some of the most extreme weather this weekend, it was hit with a “creepy” fog on Friday that saw planes grounded at Melbourne airport.

Watch a passenger take off in the Melbourne fog below:

Get ready for a weekend of wild weather