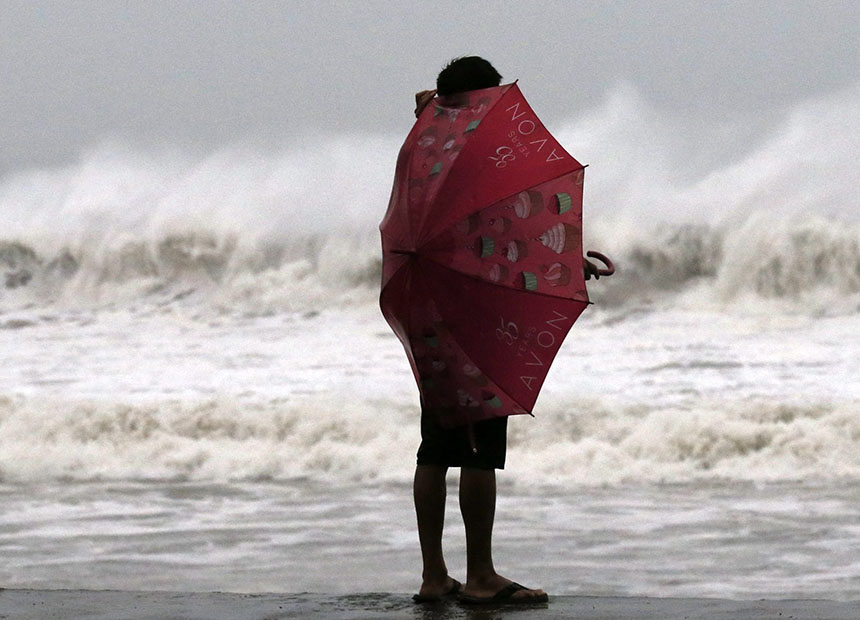 The typhoon roared in from the Pacific Ocean and crashed into remote fishing communities of Samar island on Saturday night with wind gusts of 210km/h, local weather agency Pagasa said.

The wind strength made Hagupit the most powerful storm to hit the Philippines this year, exceeding a typhoon in July that killed more than 100 people.

“Tin roofs are flying off, trees are falling and there is some flooding,” Stephany Uy-Tan, the mayor of Catbalogan, a major city on Samar, told AFP by phone minutes after Hagupit made landfall.

Fearful of a repeat of last year when Super Typhoon Haiyan claimed more than 7,350 lives, the government undertook a massive evacuation effort ahead of Hagupit that saw millions of people seek shelter.

Hagupit was forecast to take three days to cut across the Philippines, passing over mostly poor central regions, while also bringing heavy rain to the densely populated capital of Manila slightly to the north.

The government warned of storm surges up to five metres high in some areas, flash flooding, landslides and winds strong enough to tear apart even sturdy homes.

Tens of millions of people live in the typhoon’s path, including those in the central Philippines who are still struggling to recover from the devastation of Haiyan, which hit 13 months ago.

Haiyan was the strongest storm ever recorded on land, with winds of 315km/h, and generated tsunami-like storm surges that laid to waste entire towns.

As day broke on Sunday, many areas across the eastern Philippines were uncontactable and it was impossible to know how badly they were damaged, Red Cross secretary general Gwendolyn Pang told AFP.

In those that were reachable, residents and officials reported terrifying winds and waves that destroyed homes, although with most people in evacuation centres there were hopes casualties would be few.

In Tacloban, one of the cities worst-hit by Haiyan, palm-thatch temporary houses built by aid agencies for survivors of last year’s typhoon had been torn aport, vice mayor Jerry Yaokasin told AFP.

However, there was no repeat of the storm surges that did the most damage during Haiyan, known locally as Yolanda.

“There is a collective sigh of relief. The initial assessment is that there are no casualties. We were better prepared after Yolanda, up to 50,000 people were packed in evacuation centres,” he said.

In the eastern region of Bicol that is due to be hit throughout Sunday and Monday, authorities said they were aiming for 2.5 million people – half the local population – to be in evacuation centres.

At dawn on Sunday, huge waves pounded the coast of Legaspi, a major city in Bicol that was due to feel Hagupit’s full force later in the day.

Walls of walls of seawater more than one-metre high crashed above the city’s seawall and sprayed water and debris onto the deserted Legaspi Boulevard, according to an AFP reporter.