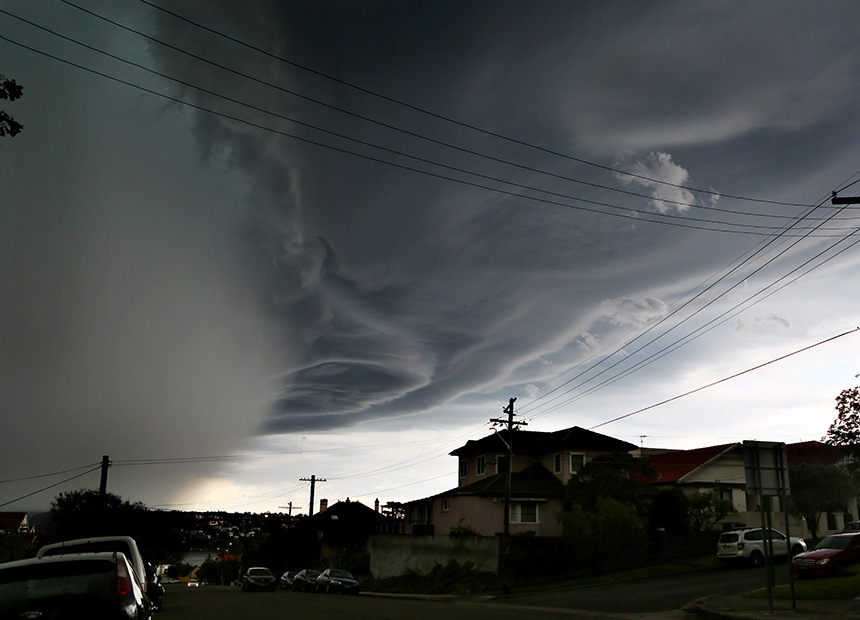 Emergency services are on high alert as another super-cell storm is tipped to cut a swathe across New South Wales and affect Sydney later today.

Major thunderstorms – many of them severe – have hit most of the state since the beginning of the week and emergency services are bracing themselves for another busy day.

There were about 300 emergency callouts across NSW last night, with a likelihood of severe storms right down the state’s coast.

“We’re just preparing for different levels of those thunderstorms to hit across the mid to eastern parts of the state,” SES spokesman Todd Burns said.

The SES urged people to avoid floodwaters and to secure loose items around their homes ahead of the forecast storm due to hit late today.

Weather forecasters said the line of thunderstorms, caused by slow-moving low pressure troughs, are expected to ease on Sunday but will linger until at least the middle of next week.

Bureau of Meteorology spokesman Francois Geffroy said severe weather warnings were likely to be issued throughout the day.

“There’s a slow-moving trough over inland NSW, sucking in moist and unstable air over the last few days, resulting in storms and thunderstorms over much of the state, except for the far north-west,” Mr Geffroy said.

“An upper trough will intensify the amount of rain expected over the south east of the state and severe weather warnings could be issued for parts of the south coast,” he said.

“Yesterday there were falls of over 50 millimetres in some areas including the northern rivers, the Illawarra and the south coast and Wollongong had 66 millimetres [on Friday].”

Thunderstorms rolled across the state on Friday, bringing lightning, rain, flash flooding and hail to the Blue Mountains and western Sydney.

On Friday, one lightning strike started a fire at a kiosk at Rooty Hill in Sydney’s west while Asquith Public School was hit by lightning as about 400 people gathered for a Christmas carols show.

About 6,000 customers lost power, although most had it restored by late evening.

Just after the height of the storm, Fire and Rescue New South Wales received 40 calls for help.