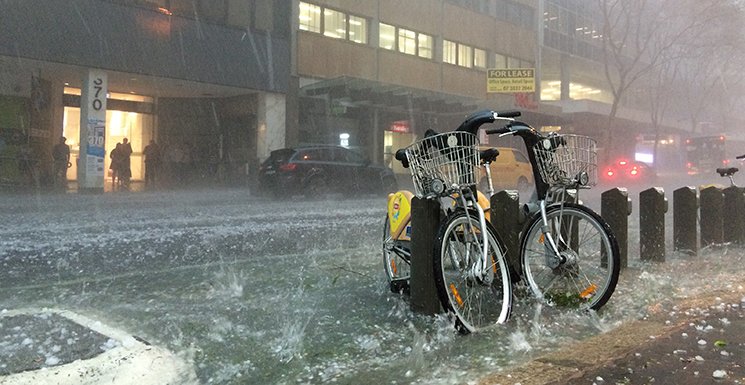 The storm left public transport passengers stranded, roads flooded, homes and cars damaged and trees uprooted before moving up the coast and dissipating.

Power was cut to around 90,000 homes at the height of the storm, winds reached in excess of 140kph and there were 6000 lightning strikes.

All but about 3000 properties are now back online.

The Insurance Council of Australia said it had received more than 15,000 claims in 24 hours, with almost 9,500 of those for vehicles with hail damage.

Mr Newman has commissioned the Defence Force and SES volunteers from around Queensland to help with roof repairs and recovery efforts.

He said the priority was getting the city back to normal.

“Myself and the Lord Mayor weren’t going to muck around, and that’s why we made the request for some soldiers from the Army Base at Enoggera,” he said.

“Those people are good at getting out and getting to a job.”

The Premier said the damage bill could reach $150 million, but said it would take a while to know the exact cost.

“In this case we have many households and people driving motor vehicles who have been affected,” he said.

“Mercifully, [we] only had reports of 12 people being injured,” he said, adding that he believed the injuries were “relatively minor”.

“I’m astounded but so grateful that that is all that we’ve got given the amount of shrapnel flying around last night.

“It’s going to be some days before we know the true cost.”

Meanwhile, Queensland Health has warned appearance or smell is not a reliable indicator that food is safe after the power outages.

Queensland Health spokeswoman Sophie Dwyer said if in doubt, throw it out.

“Food after about four hours out of refrigeration will start to deteriorate, so it’s important that if it’s been not kept cold in that time it should be thrown out,” she said.

Clean-up on in Brisbane