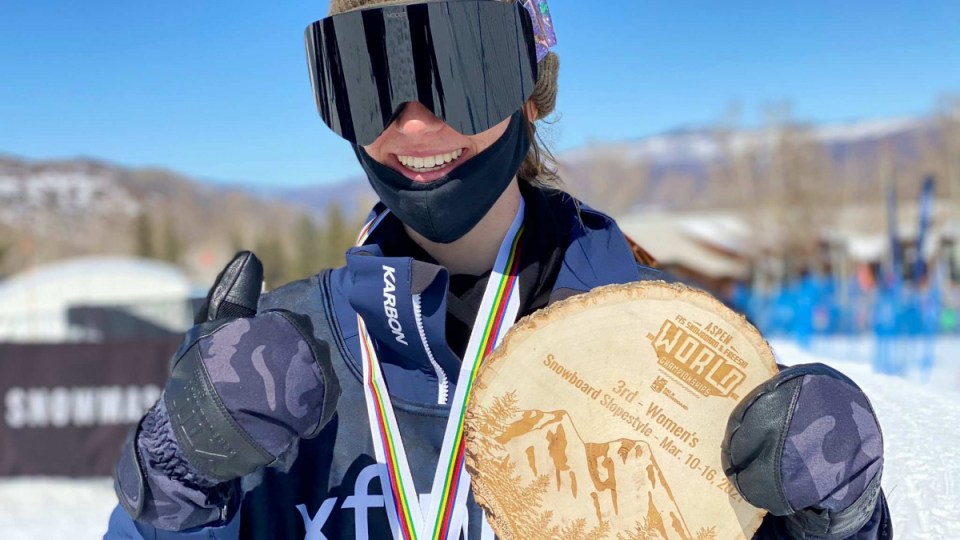 Tess Coady scored bronze in Aspen and rates herself a serious shot for a even better result in Zhangjiakou. Photo: Twitter/Olympic Winter Institute Of Australia

The Australian snowboard slopestyle specialist finished eighth in a field of 30 on Saturday, with the top 12 advancing through to Sunday’s finals and medal round.

But the 21-year-old was thrilled just to be out on the Zhangjiakou course after being robbed of an Olympic debut four years ago in PyeongChang, when she tore her left ACL in practice before the race and couldn’t compete.

Coady scored 55.98 in her first run on Saturday to sit seventh and then with competition heating up, nailed her second run to earn a score of 71.13 to secure her passage into day two.

New Zealand’s Zoe Sadowsky Synnott blew away the field with her second outing, wowing the judges for a score of 86.75 – more than five points clear of Japan’s Kokomo Murase who is making her Olympic debut.

Two-time gold medallist American Jamie Anderson had to rely on her first run to qualify in fifth after a disappointing second showing.

Eye on the podium

After winning bronze at last year’s world championships In Aspen and topping the podium last month at the World Cup round in Switzerland, Coady is a genuine Beijing medal contender.

The Melbourne product was relieved to have made it to the start gate this time around.

“It’s nice to get some redemption at this event so I’m pretty stoked,” Coady said.

She revealed she hurt her ankle with a fall off a jump in practice on Friday, so was happy to lay down two good runs.

“I had a pretty sore body after practice when I got smoked, so I was definitely happy to land two good runs and get a good score on the board with the second one,” she said.

Coady said while conditions were windy during practice, causing havoc for riders, it was manageable on Saturday.

The course is a homage to the host nation and includes a mini Great Wall of China, which is supposed to act as a wind block.

“The rails are pretty chilled to ride in the wind but jumps is where it’s tough so they should have just built an actual great, great wall – that would have been sick – but the course looks insane,” she said.

Coady felt she still had more in the tank, with three runs ahead on Sunday.

“I’ve definitely got more to give,” she said.

“It wasn’t the cleanest run I’ve ever done but it wasn’t too bad.”