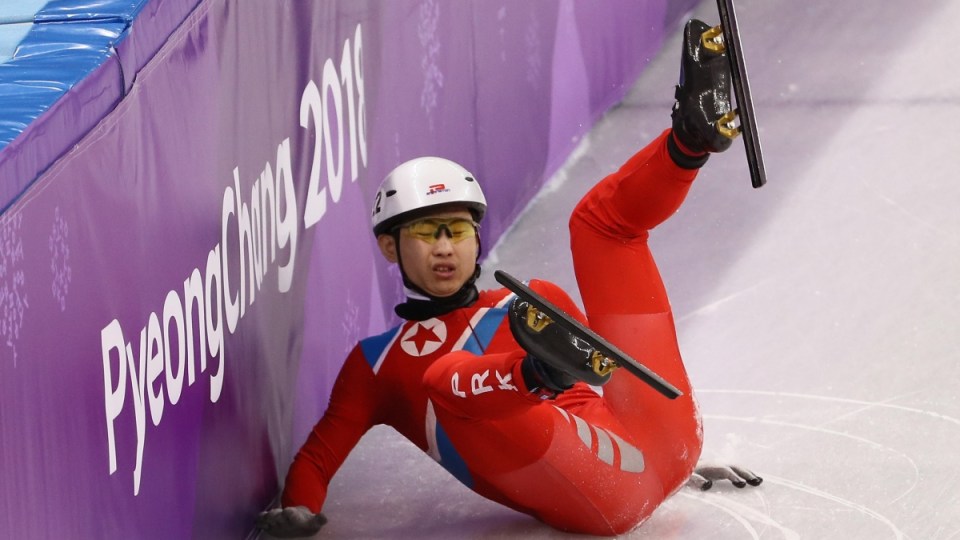 Jong had a tough time staying on his feet. Photo: Getty

At best it could be described as a reflex reaction but at worst, Jong Kwang Bom’s attempt to stop a men’s speed-skating race at the Winter Olympic Games was a piece of extremely poor sportsmanship.

The 16-year-old, representing North Korea, appeared out of his depth in the 500m heats in Pyeongchang.

And after face-planting just a few strides in, he attempted to bring down Japanese rival Keita Watanabe with his hand.

It appeared a malicious move, designed to force judges to call for a re-start, while it was also incredibly risky given the potential injury he could have suffered.

“[He] got his hands perilously close to the skates of Keita Watanabe as well,” Seven Network commentator Peter Donegan said.

“That makes you wince a little bit to see what could happen in that circumstance.”

Jong’s move drew heavy criticism but the judges did decide to opt for a re-start.

The teenager was no better in the second heat, though, also crashing out, this time at the expense of another rival.

USA Today reporter Martin Rogers tried to speak with Jong in the aftermath.

“As he emerged in the interview zone afterward, Jong wore the kind of look you’d expect from someone who might have to go home and explain to a military regime with nuclear weapons why you performed so badly while representing your country,” he wrote.

“When asked for comment, Jong turned his head the other way and kept walking.”

Rogers then expressed genuine concern for Jong’s future, adding: “Man, was he bad. We don’t know much about the North, but hopefully he won’t get punished.”

At least his rivals declined to add to the criticism, with Watanabe saying he thought Jong’s actions were a “reflex”.

American skater Thomas Hong could have been angry after Jong’s second crash contributed to his failure to make the quarter-finals.

“It did affect me because I was just too close,” he said.