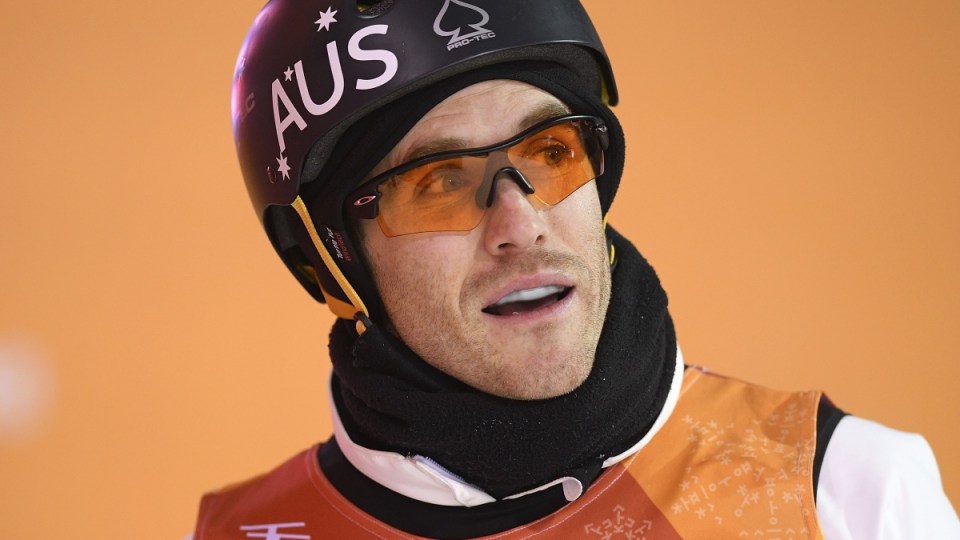 David Morris failed to advance past the first round of finals after a controversial scoring decision. Photo: AAP

Sochi silver medallist David Morris missed out on the Olympic men’s aerials final in controversial circumstances, as questions were raised whether the Australian was robbed by judges.

Morris’ Pyeongchang campaign came to an end at Phoenix Snow Park on Sunday night when he finished 10th out of 12 jumpers with a score of 111.95, needing a spot in the top-nine to advance.

The Australian seemed likely to progress to the penultimate round despite a slightly sloppy landing on his opening quad twisting triple somersault after China’s Jia Zongyang failed to land his final jump.

However, despite his botched landing, Jia was ruled to have bested Morris by scoring a 118.55 to qualify for the second round in ninth position.

Morris kept his feet after he landed but was given a 6.8, the same score as Jia, for the landing.

The 33-year-old Morris admitted to being “confused” about the judges’ scores, but ruled out taking the matter further.

“I thought I was in when I saw him crash,” Morris told Channel Seven.

“When I saw the score come up I was surprised by it. When I asked my coach, he went up to the judges and questioned them on it.

They gave him [Jia] four metres of controlled skiing, which is what counts for a landing. You can watch replays and slow mo [slow motion replay] and argue as much as you want.

“They gave him a four-metre stance where he had control. I can’t argue it. Tough luck for me.”

Morris’ Australian teammate Lydia Lassila, commentating for Channel Seven, said Jia “wasn’t in control” of his landing and should have been marked down accordingly.

“He’s got 118 points for that jump which seems ludicrous,” she said.

Lassila was scathing of the judges, saying: “They’ve got to seriously review what they have decided upon tonight.”

Morris, however, refused to use a judging controversy as an excuse for his failure to make the Winter Olympics final.

“I’ve accepted it. It’s fine. I’m pretty happy with myself just to be here and in one piece.”

Morris was still in contention when the final jumper of the first round, world champion Jonathon Lillis, took to the snow.

Jia claimed the silver medal with a score of 128.05, having been pipped for the gold by Ukraine’s Oleksandr Abramenko, who scored 128.51. Ilia Burov (103.17), representing the Olympic Athletes from Russia, won bronze.

Morris lets emotion out with his mother battling cancer

Morris spoke before the Games about the emotional struggle he was going through with his mother Margaret fighting lung cancer.

He had considered returning home to Australia, but was persuaded by his mother to stay in Pyeongchang and compete.

“Had a little cry up the top there,” Morris said.

“Finally allowed myself to get sad about mum and all that stuff. Been holding that in for a long time. Not letting it to get to me.

“Didn’t allow myself to get emotional. Finally let it out and start to deal with real life.”

However he reiterated he would be fine, saying he’s in a “good place”.

“No one needs to be disappointed for me. I’m in a really good place. I’m really happy with how I’ve done this whole year. I haven’t had heaps of results. Olympic finals is great. Doing five twists on snow is great,” he said.

“He’s got 118 points for that jump which seems ludicrous.”