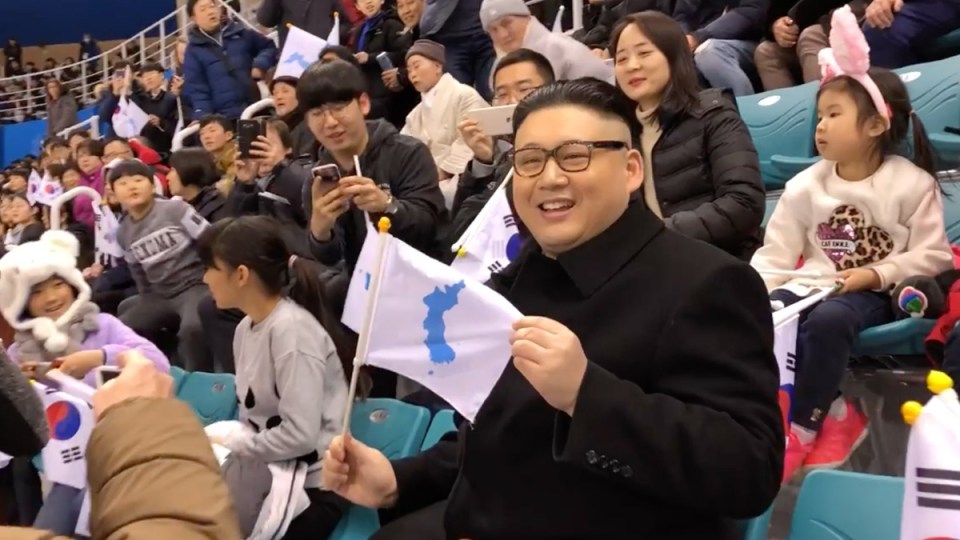 "Kim" was all smiles until he was detained. Photo: Getty

An Australian-Chinese Kim Jong-un impersonator is continuing to cause chaos at the Winter Olympics, revealing he was “dragged” away by angry men who then kicked him at an ice hockey match on Wednesday.

The man, who caused a stir at last week’s Opening Ceremony, was detained at a women’s ice hockey match between Japan and the unified Korean team.

Howard, who reportedly lives in Hong Kong and describes himself as a “professional impersonator” of Kim Jong-un, tried to rev up the state-sanctioned cheerleaders who have been watching the ice hockey team before his plan went awry.

“When I appeared in front of them, most of them were surprised, shocked, and some of them laughed,” he told the Seven Network.

“Those who didn’t find it funny were their minders … three rough-looking guys, not in uniform who I suspect were North Koreans, came out of nowhere and grabbed me by the arm.

“When I waved the unified Korean flag at them they got really pissed off and started kicking me in the shins.

‘Kim’ said he was not arrested, despite being whisked away by staff.

At the united Korea vs Japan womens' hockey game, an apparent Kim Jong-un impersonator starts dancing in front of North Korean cheerleaders. Apparent employees of the DPRK push him aside. He's now sitting nearby giving interviews (in English) pic.twitter.com/PeVJYtri5Y

“They didn’t arrest me. I was detained,” he said.

“I didn’t break any law. It took them a while to get a translator but they said it was for my own safety because some conservative people [in the venue] didn’t appreciate my presence.”

He said it was important that people did not gloss over the way North Korea was ran just because the Games were on.

“South Korea [where the Games are being held] is a democracy and it’s freedom of speech,” he said.

“It’s very important to remind the whole world that you can’t let North Korea hijack these Games … we’ve got to remind people that it’s a terrible regime, and as an Aussie impersonator, I need to take the piss.

“I’m here to send up the whole situation with North Korea and South Korea and everything that has to do with that.”

‘Kim’ attended the Opening Ceremony with a Donald Trump impersonator, who is reportedly his partner.

He later boasted on Facebook that the pair were “causing too much commotion with the press” and that they “created even more of a spectacle” when they entered the general admission areas of the stadium, flanked by security.

Kim Jong-un is not present at the Games but his younger sister, Kim Yo-jong, attended select events in the first few days, including the ice hockey.