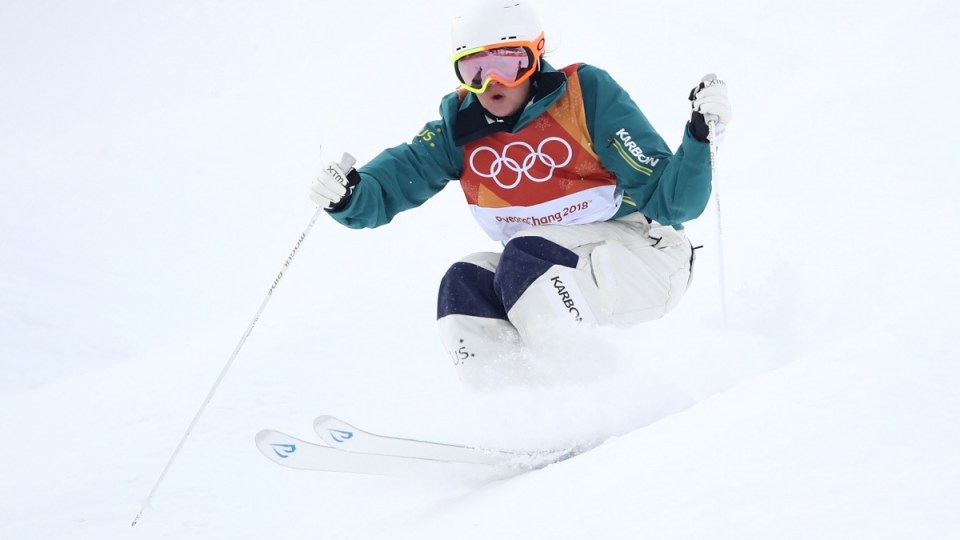 Britt Cox in action at the Winter Olympics. Photo: Getty

Britt Cox says competition day is her favourite day. And this is the big one.

The Australian offers those words like a mantra every time she negotiates the 250 metres of knee-jarring bumps and two jumps of a professional moguls course.

On Sunday she’ll look for another favourite day as she attempts to become the first Australian gold medallist of the 2018 Winter Olympics.

In the 2016/17 season there were plenty of days she would’ve marked down as special. After all, she won seven World Cup events and took out a world championship in the most successful individual season of any Australian winter sports athlete. Prior to that season she hadn’t won an event.

“Last year was really unexpected for us with her performance. Right up to when the season unfolded we had no expectations for anything,” coach Steve Desovich said on finals eve.

Then as the season got going she skied well from the beginning – she skied fast, was aggressive and things just snowballed from there.”

But that breathtaking run of success has given way to a few more days that weren’t quite as favourable.

Desovich said it was always going to be hard to continue that level of dominance and felt the rest of the competition had improved.

“It’s tough to say,” Desovich said when pressed on the current season for Cox, which has included two wins but four other finishes off the podium.

“It has probably been a bit of a combination of both (her form and improvement from other athletes).”

“The field in an Olympic year have done great work; they’ve improved, they’ve stepped up their game. But Britt has levelled off a bit as well.”

Cox qualified sixth for the finals with France’s Perrine Laffont in first.

In a far tighter World Cup season the Victorian sits third on the standings behind American Jaelin Kauff and France’s Laffont.

The trio and Kazakhstan’s Yulia Galysheva have shared the six World Cup victories this season with the winner of the Olympics a strong show of coming from that group.

Cox moved automatically through to the first 20-woman final and will look to still be there as the field gets whittled down to 12 and then six for the decider.

She did not train on Saturday as she prepares for the final.

Jakara Anthony, Madii Himbury and Claudia Gueli will all look to progress into the the top 20 and beyond through a repechage.