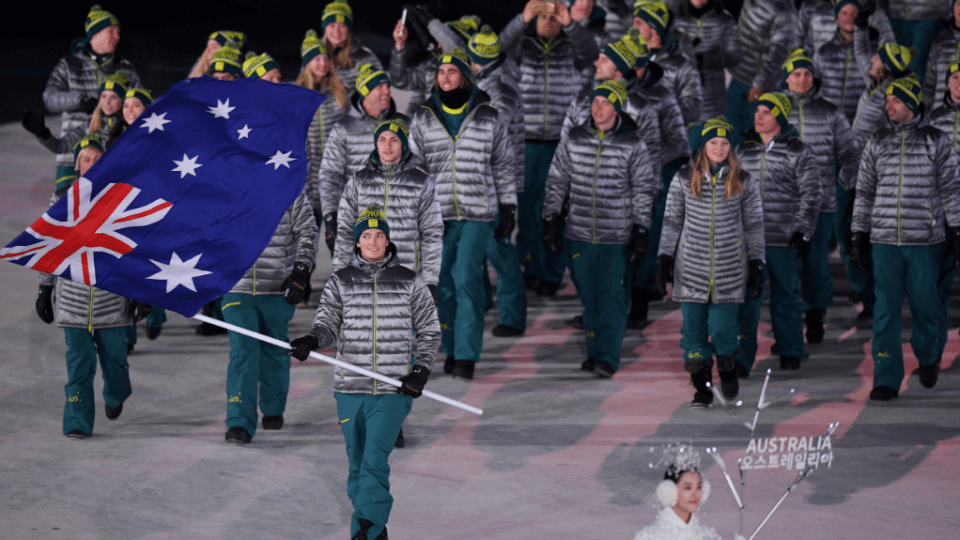 It was a frosty five degrees below zero in Pyeongchang, but flag-bearer Scotty James warmed up the night with his smile. AAP/Dan Himbrechts

Twenty-seven of Australia’s 51 Winter Olympians skipped Friday night’s opening ceremony to rest up for the competitions ahead – and there’s every chance a good many couch potatoes back home did likewise.

It’s not as if the pageantry and parading wasn’t spectacular. It was — up to a point.

But take away the eye-popping holographic net of brilliant white lights that formed an ethereal dome over the stadium, ignore the slick stage-management and those oversized mega-puppets representing Korea’s mythic origins and folklore, and it was thin ice to support two hours of sofa-bound attention.

Apple-cheeked kids smiling and waving? There were plenty of those at various points, but big deal. There is never a shortage of cherubic youngsters at these sort of events.

Korean sports heroes of yesteryear parading the national flag? Not really, not unless you have a passionate interest in learning more of the the yin-and-yang symbol at its centre, which Seven’s commentary helpfully explained if you didn’t.

There were flames and fireworks, and even more half-pint moppets, plus a bare-chested cross-country skier from Tonga — yes, Tonga! — and constant pleas for the nations of the world to calm down and get along.

When your neighbour to the north is run by a third-generation tyrant with a nuclear arsenal and a bad attitude, peace can seem like a very good idea indeed.

What was missing from the ceremony was the element that made the Sydney Olympics kickoff so memorable: a sense of fun wrapped up in a host nation’s willingness to have a good-natured chuckle at its own expense.

The most interesting elements of the gala show were those that had little or nothing to do with snow, ice and athleticism.

There was the spectacle of North Korea and South Korea marching together, which organisers and Games publicists pitched as a symbolic reunion of the two nations, still officially at war as they have been since 1950.

Thing is though, North and South have united for Olympics promenading before with no noticeable decrease in tensions.

Another vanished ingredient was the Russian flag, with 169 winter athletes marching behind the Olympic banner as an official rebuke for repeated and habitual doping and drug-cheat scandals.

When the packed crowd was treated to a version of John Lennon’s “Imagine” there was something missing — the lines about there being no heaven and hell. Some Olympic competitors, you see, remain quite religious.

In the mixed figure skating, another diplomatic deletion. This one erasing the lyrics of the traditional folk song the Korean skaters had selected as the accompaniment for their routine. One of the verses mentions some insignificant islands over which both Korea and Japan have been at loggerheads for decades, so the reference had to be scratched.

“We told the skaters to prepare for a version without the lyrics to avoid political controversy,” a spokesman for the Korea Skating Union said.

Others  weren’t quite so sensitive to hurt feelings — visiting US Vice-President Mike Pence for one.

While the stadium was being readied for the big show, Mr Pence pushed the Trump administration’s hard line against North Korea.

“We will not allow North Korean propaganda to hijack the message and imagery of the Olympic Games,” he said, adding that any talks would have to begin with Pyongyang’s agreement to scrap its nuclear weapons.

“We will not allow North Korea to hide behind the Olympic banner the reality that they enslave their people and threaten the wider region,” Mr Pence thundered.

Just to ram home his point, Mr Pence skipped a dinner at which organisers had planned to seat him within whispering distance of North Korea’s ceremonial head of state Kim Yong-nam.

Mr Pence and Mr Kim crossed paths briefly before the ceremony, with observers saying each man did his best to avoid looking the other in the eye. The were subsequently placed in adjoining seats at the stadium, where they became mirror images, each staring straight ahead and neither acknowledging the other’s existence.

The tensions underlying the event told a different story to the message of peace and harmony rising from the arena — a narrative Mr Pence was keen to see focused on the brutality and belligerence of King Jong-un’s regime.

Accompanying him from the US as a reminder of Pyongyang’s outlaw status was Fred Warmbier, whose son, Otto, died soon after being released from North Korean captivity last year.

The two Koreas did a better job of putting a happy face on 68 years of hot and cold war, standoffs over the barbed wire, occasional bloody attacks and a sealed-tight border. Posing for the cameras, Pyongyang’s Mr Kim shook hands with the South’s leader, Moon Jae-in, prior to the opening ceremony.

The North Koreans had good reason to be both polite and grateful. After flying in from Pyongyang they were escorted through a railway station emptied of all but themselves and a cordon of security of men, then ushered aboard a bullet train reserved for their exclusive use.

As for the US, North Korea wasn’t too upset by Mr Pence’s snub, having earlier announced none of its representatives would shake the American’s hand even if he offered it.

So much for the “Peace Olympics”.

Fortunately there is more to the Winter Olympics than mega-sized tiger puppets and strangely accented versions of old John Lennon staples. It is called sport and Australia’s representatives are off to a flying start.

Moguls event main medals chances Britt Cox and Matt Graham both went straight from the qualifying round and into the men’s and women’s finals. But the Olympic campaign of another men’s moguls hopeful, Brodie Summers, hangs in the balance after he was hit with a training injury.

All four Australian moguls women finished in the top 20 after the first of two qualification sessions.

Filling in the gaps in the commentary with an anecdote any cricket commentator might have envied, she mentioned in passing how she had once caught the roving eye of Monaco’s Prince Albert.

“He chatted me up for quite a bit,” she recounted, adding that the infamously randy royal gave her his phone number and said she should give him a tingle.

She did — and no one picked up the phone.

Viewers who bailed early from Seven’s coverage of the opening ceremony probably know how she feels. If they didn’t nod off, they quite possibly regret picking up the channel-changer and tuning in.