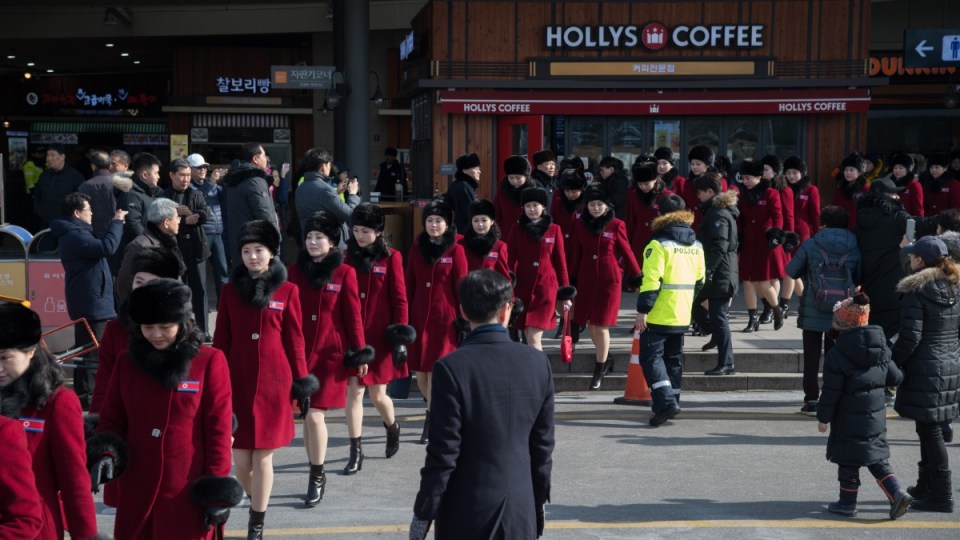 Give us an N! Give us a K! North Korea's 229 cheerleaders arrive in South Korea on February 7 to support their tiny team. Photo: Getty

While only 22 North Korean athletes are competing at the Pyeongchang Winter Olympics, they can be guaranteed of a rapturous welcome at their events.

An astonishing 229 cheerleaders dominated the 280-member delegation that crossed the demilitarised zone dividing the two Koreas at a post north of Seoul on February 7.

Previously heralded as North Korea’s “army of beauties”, the women turned heads and made global headlines in their matching travel outfits of fur-trimmed scarlet coats, fur hats and ankle boots.

“I love the North Korean cheering squad’s outfit. It’s quite something! I want that hat!” tweeted one.

While most of the matchy-match squad preferred to let their jazzy look do the talking, “I am happy to see you,” one cheerleader said.

She offered a smile but no clues as to what their cheerleading routines – said to be as strictly choreographed as a Pyongyang military march –  involve.

“You just wait. If I tell you now, it would be less exciting when you see it.”

Twitter lit up with fans of the phalanx of cheerleaders.

According to reports, the cheerleaders were “immediately whisked away” in a convoy to a hotel in a small rural town 120 kms from the Games venue.

During a bathroom break at a service station, the women smiled and waved walking past a clothes shop and Dunkin Donuts franchise.

The cheerleaders, all in their late teens or early 20s, are said to be “handpicked” from universities and musical skill is valued.

They have to pass stringent checks on their background, looks and loyalty to the ruling Workers Party, according to Chinese media.

“They must be over 163cm tall and come from good families,” An Chan-il, a defector who runs the World Institute for North Korea Studies, told AFP news agency.

Apart from boosting team morale, the role of the cheerleaders is to “impress people”, Japanese documentary maker Jiro Ishimaru told The Guardian.

“As well as being young, tall and beautiful, they train extremely hard so that they don’t put a foot wrong.”

The squad was last deployed 12 years ago but in the past has been seen at three sporting events in South Korea.

One then 16-year-old member from a 2005 group, Ri Sol-Ju, springboarded from cheerleading to marry North Korean leader Kim Jong-Un.

At a welcome dinner banquet hosted by South Korea at their hotel, the cheerleaders showcased another group uniform, matching red skirt suits.

The cheerleaders will reportedly support South Korean athletes when none of their own are in action.

According to CTV News, a North Korean delegate leading the cheer squads said their presence marked a thaw in North and South Korean relations: “A new era of reconciliation has been opened.”

Last month the two Koreas held a rare executive meeting and the North’s ceremonial head of state – the highest level Pyongyang official to ever visit the South – is expected to arrive tomorrow.