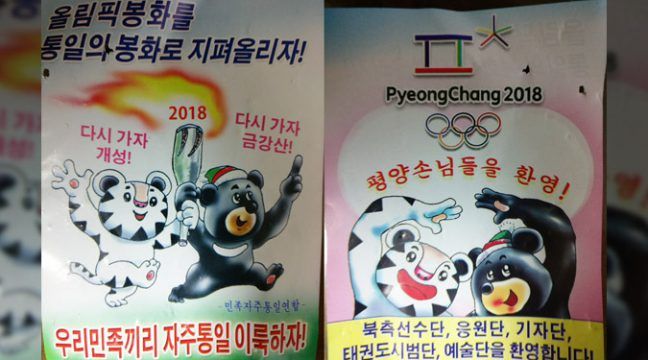 Propaganda leaflets from North Korea marking the start of the 2018 Winter Olympics have been found in the mountains in the South Korean capital, Seoul.

The fliers, which are presumed to have been dropped from balloons flown from North Korea, show the 2018 Pyeongchang Olympics logo and its two cartoon mascots standing beneath the Olympic rings, according to photos of the leaflets published by the NK News website.

“Welcome, guests from Pyongyang!” the flier reads, referring to the delegation of North Koreans travelling to the games, which begin on Friday.

The reverse side of the propaganda leaflets showed the Winter Olympics mascots striding side-by-side and saying, “Let’s go to Kaesong! Let’s go to Mount Kumgang!”, referring to the closed inter-Korean industrial zone and a failed inter-Korean tourist project that sits just inside North Korea.

Kaesong was closed by South Korea in 2016 in protest over North Korea’s nuclear and missile programs.

The inter-Korean Mount Kumgang resort in the coastal province of Kangwon closed after a South Korean tourist was shot by a North Korean guard in 2008.

North Korea announced last month a new “world-level” tourist project in the divided province that appeared to be aimed at capitalising on the international attention surrounding the Winter Olympics in Pyeongchang, a city in the South Korean-controlled half of Kangwon.

Activists in South Korea regularly use balloons to send fliers, money and foreign news across the demilitarised zone into North Korea.

In response, Pyongyang has also used balloons to send its own anti-South Korean fliers towards Seoul, where the colourful and tattered leaflets can sometimes be found in mountains or scattered in public places.