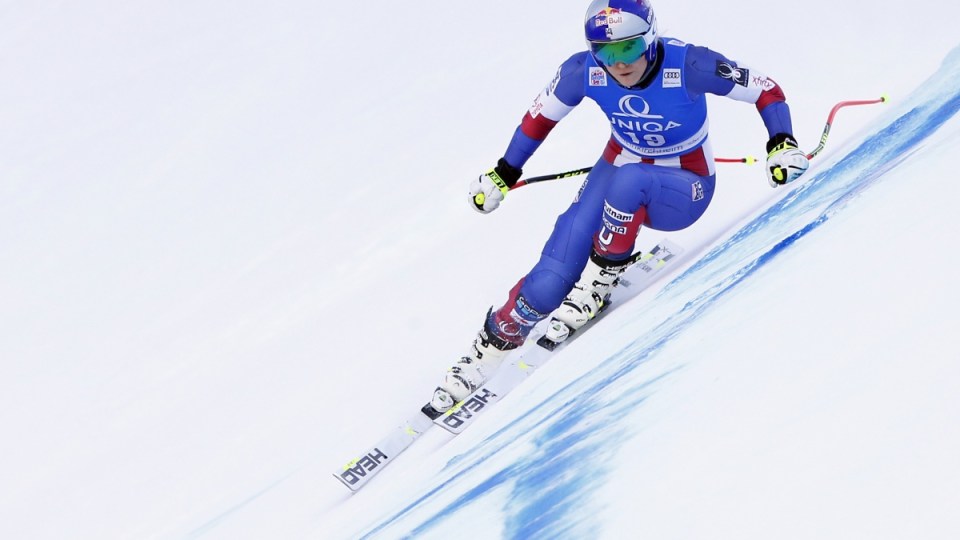 Downhill skier Lindsey Vonn will be one to watch. Photo: Getty

To many Australians, the Winter Olympics are a somewhat baffling display of curious talents and death-defying feats. Skeleton racing, anyone? Or perhaps mixed doubles curling is more your thing?

Australia first took part in the Winter Olympics in 1936, when Sydney-born skater Kenneth Kennedy travelled to Nazi Germany from Britain to finish 29th in the 500-metre speed skating.

Since then, Australians have built a creditable medal tally for a nation perhaps more comfortable in sand and surf.

“It is pleasing that winter sports are now embraced as mainstream in the Australian sports system and we hope Pyeongchang produces the results that the athletes deserve.”

But northern hemisphere nations definitely dominate the Winter Games. Norway is the reigning king, with 118 gold medals to the US’s 96 and Germany’s 78. Elsewhere, Canada dominates the ice hockey and Austrians are the stars of downhill skiing.

These sports – while foreign to Australian viewers – can be dramatic viewing for couch-bound sports fans.

Pleasingly for TV viewers in Australia, South Korea is just two hours behind most of us (on Australian Eastern Daylight Time). Coverage is on Channel Seven (and the OlympicsOn7 app), while Fox Sports will cover key events.

Downhill skiing is the Olympics’ glamour sport. It remains the crowd favourite because its premise is so simple: the fastest and bravest skier wins. The best of the downhill skiers will reach speeds of 150km/h, and medals are determined by fractions of a second.

Vision of Ingemar Stenmark, Hermann Maier, Franz Klammer and the current queen of the slopes, American Lindsey Vonn, hurtling down mountainsides are the enduring images of past Games.

In 2018, the downhill arrives with a cute nuance: the alpine skiing national mixed team event, where two men and two women race on a giant slalom course to grab points in a knockout race.

“It’s one race after another, which makes it physically and mentally tiring,” French star Alexis Pinturault has said of the event. “The team really has to work together to get everyone motivated again for each run.

Slalom and super G – think Stenmark and Alberto “la Bomba” Tomba – are other snow-sports staples that will draw huge crowds. 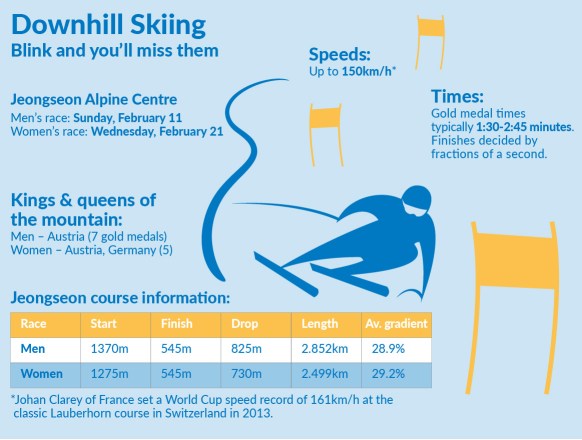 Away from the steeper slopes, ski jumping remains a perennial favourite. Unlike the downhill, where skiers try to stay in contact with the snow for as long as they can (air time slows them down), the jumpers want to fly as long and high as possible. They’re often airborne for seven or eight seconds while covering 140 metres or more.

This is a sport the Norwegians have dominated. Since Jacob Tullin Thams unveiled the Kongsberger technique (leaning forward) to win in 1924, his compatriots have won a further 29 gold medals in jumping.

As the Games draw to a close, all eyes will turn to ice hockey on the final day of competition. Inevitably, the question will be: can anyone stop Canada’s all-conquering men’s team from winning three consecutive gold medals?

On the women’s side, North and South Korea will field a joint women’s team, which could provide one of the highlights of the Games. 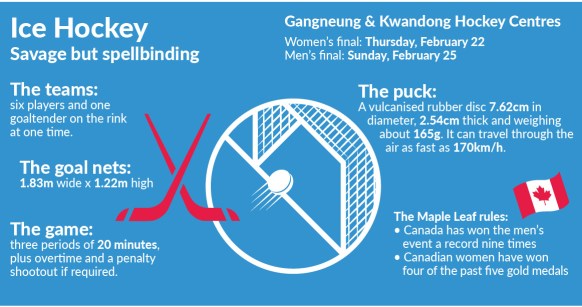