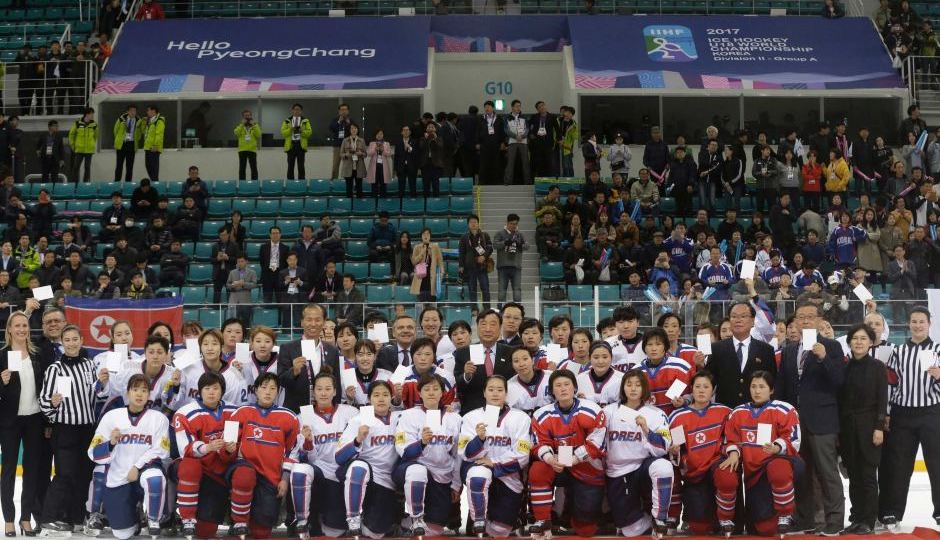 North and South Korea have told the International Olympic Committee of their wish to field a joint women’s ice hockey team at the Pyeongchang Olympics, officials in Seoul have said.

A joint team at the games in South Korea would require IOC approval.

But if realised, it would be the Koreas’ first unified Olympic team, leaving a major mark in their sports diplomacy that often mirrors their rocky political ties.

Mr Hwang said the two Koreas later agreed in principle to form a joint women’s hockey team and informed the IOC about that.

He said the matter would be discussed on Saturday when officials from the two Koreas and the IOC meet at IOC headquarters in Lausanne, Switzerland, according to South Korea’s sports ministry.

The two Koreas previously sent a joint team to major international sports events only twice, both in 1991.

One event was the world table tennis championships in Chiba, Japan, and the other was soccer’s World Youth Championship in Portugal.

During an era of detente in the 2000s, their athletes marched together under a “unification flag” depicting their peninsula during the opening and closing ceremonies of nine international sports events, including the Olympics and Asian Games, but they failed to produce a joint team again.

The latest reconciliation mood flared after North Korea agreed last week to send a delegation of officials, athletes, cheerleaders, journalists and an art troupe to the Winter Olympics in a major reconciliatory gesture after a year of tension over its expanding nuclear program.

Critics say the North may aim to divide Seoul and Washington as a way to weaken US-led international pressures and sanctions on the country.

The South Korean government, led by liberal President Moon Jae-in, wants to use the Olympics as a chance to improve its long-strained ties with North Korea and help ease the nuclear standoff.

Aside from the joint hockey team, the Moon government also wants to resume a joint march at the Olympics in Pyeongchang.

South Korean Sports Minister Do Jong-hwan told politicians on Monday that the two Koreas would parade under a “unification flag” during the opening ceremony of the Pyeongchang Games if they conduct a joint march.

He said a joint march also requires an IOC endorsement and that it will also be discussed during the upcoming IOC meeting.