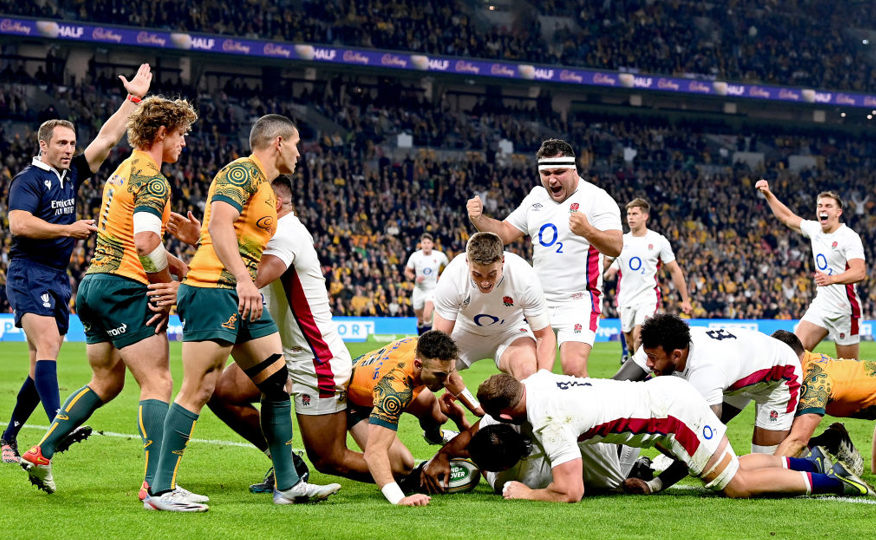 England coach Eddie Jones has blasted the state of Test rugby, with the laws of the game again the major talking point after his side’s win over the Wallabies.

Australian winger Izaia Perese and Jones’ playmaker Marcus Smith were both given 10-minute sin-bins for what were deemed deliberate knock downs when they spilt attempted intercepts.

Their exits drew exasperation from the crowd and bewilderment on social media from those watching at home, their collective groans backed up by former Wallabies coach Jones post-game.

He said neither man deserved to be binned because they were attempting to make a clean catch and that the law to determine a deliberate knock down “doesn’t make any sense”.

But the colourful coach took it further, pointing to the New Zealand-Ireland Test earlier on Saturday, as the All Blacks copped two yellow cards and a contentious red in their loss.

All Blacks captain Sam Cane was perplexed when replacement tight-head prop Angus Ta’avao was sent off for a front-on tackle where his head collided with Garry Ringrose’s.

Ta’avao was left dazed and blooded from a gash on his right eye, while Ringrose left the field for a head injury assessment.

“The game’s out of control,” Jones said. “You saw the New Zealand-Ireland Test; at one stage, commentators couldn’t count how many players were on the field, you had three backs packing a scrum.

“We’ve gone the full hog where everything’s a red card, yellow card … there needs to be some common sense.

“I picked up the referee’s pocket (before the game), he had plenty of cards in it.”

Wallabies coach Dave Rennie was more circumspect, but suggested that even the officials didn’t like the deliberate knock-down law and he felt Perese had made a genuine attempt to take the catch.

The 25-17 victory – Australia drew within five points after trailing 19-0 – relieved some pressure on Jones and forced a series decider in Sydney next Saturday.

‘When are you getting sacked?’

The veteran coach played with journalists who had amplified the pressure on him after their series-opening loss in Perth last week.

“I love that, my poor mother! But I don’t mind, I made the choice to take the job and there’s an infatuation with sacking coaches now.

It’s neither here nor there for me, but I love coaching at Suncorp (where he’s now won all seven Tests he’s coached).

“Forty-eight thousand people, all full of drink that want to see their team win … when you turn them away it’s a great feeling.”